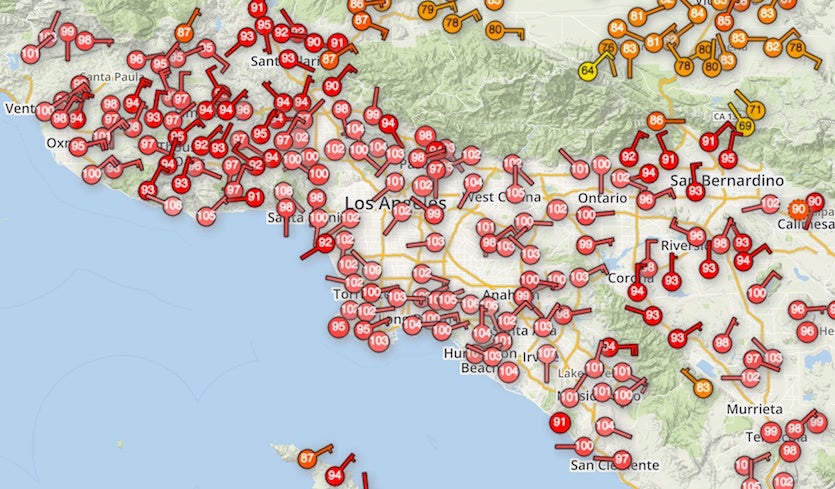 Many stations in southern California had already topped 100°F as of 1 pm PDT Tuesday Oct. 24, 2017, as shown in this WU WunderMap.

It’s not every Oct. 23 or 24 that millions of Americans are swathed in temperatures above 100°F. This week has done just that, bringing some of the toastiest weather ever observed in the U.S. during late October, and more pre-Halloween heat is on the way.

By far the most scorching weather has been in Southern California, although it’s also been exceptionally mild this month in settings as far-flung as Michigan, Florida and New England.

A multi-day summer-like heat wave kicked into high gear on Monday and continued Tuesday along and well inland from the California coast, from Santa Barbara through Los Angeles to San Diego. Dozens of locations recorded highs for the date and all-time highs for this late in the year, and Santa Ana winds kept the temperatures amazingly warm throughout Monday night. In Orange County, the city of Fullerton soared to 107°F on Monday. According to WU weather historian Christopher Burt, this is likely the hottest single temperature recorded anywhere in the U.S. so late in the year. Even Death Valley has never recorded a temperature this high after Oct. 16 in any year! For comparison, the national U.S. record high for November is 105°F, most recently at Tustin Irvine Ranch, California, in 1997.

Another impressive mark: downtown Los Angeles (the University of Southern California campus) hit 102°F. Prior to Monday, the downtown station had never topped 100°F after Oct. 17, in records going all the way back to 1877. Incredibly, the USC downtown station got even hotter on Tuesday, reaching 103°F at 1 pm.

Here are some of the many records set on Monday, with the old daily record and year and the year that observations began. Asterisks denote that the high was an all-time record for so late in the year. 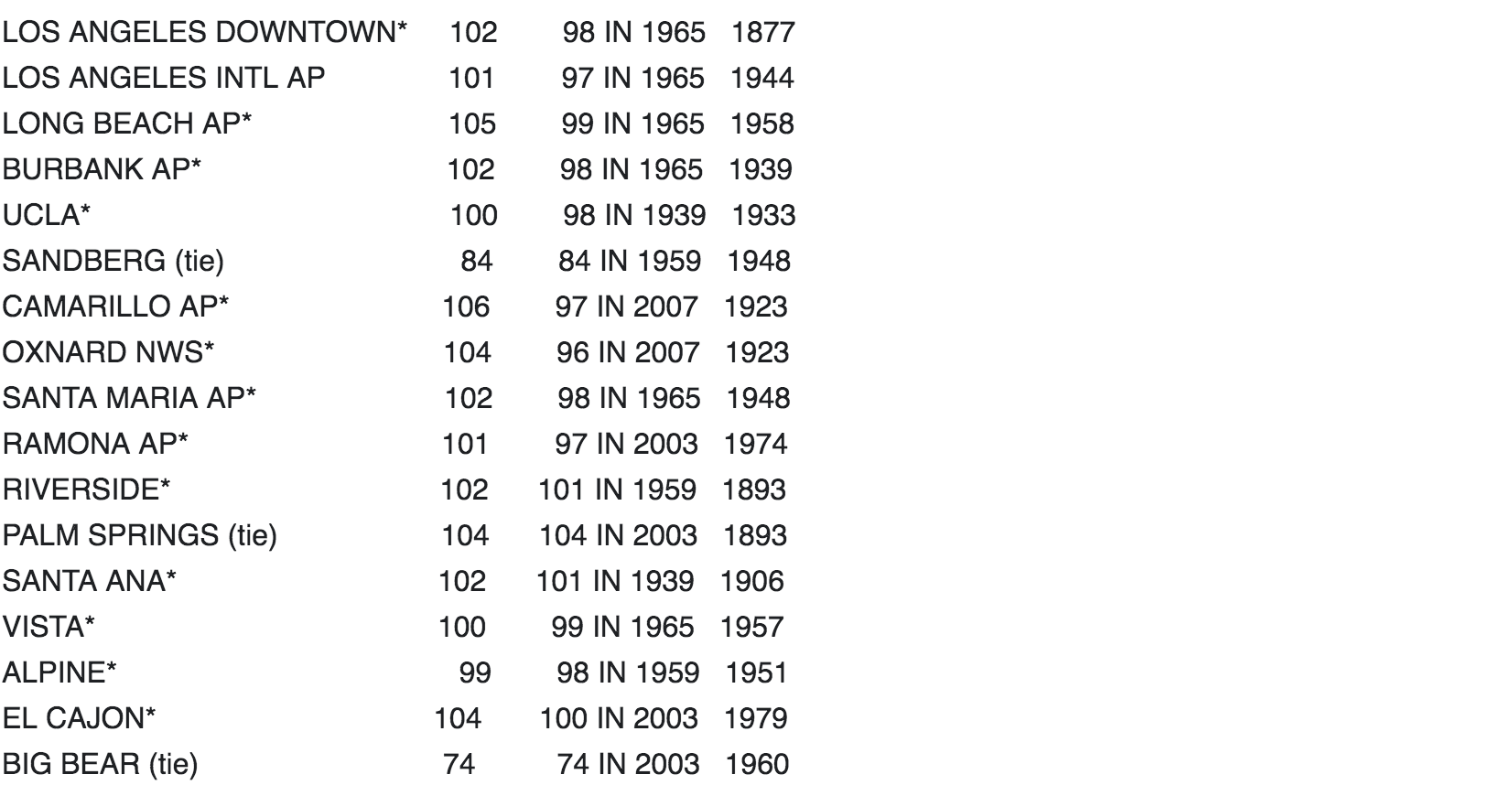 The heat wave and Santa Ana winds are being caused by a large, near-record-strength dome of high pressure that’s settled in over the Great Basin, a few hundred miles northeast of Los Angeles. The difference in pressure between this high-pressure system and lower pressure over Southern California has driven gusty northeast winds over Southern California. Since these originated over desert areas, they are hot and dry. As the air descends from the mountains to the coast, the air gets even hotter and drier due to adiabatic compression—the process whereby the pressure on a parcel of air increases as it descends, decreasing its volume, and thus increasing its temperature as work is done on it. These downslope winds are why the most impressive records on Monday occurred along and just inland from the coastline.

In locations where the winds kept up on Monday night, there was little relief from the heat. Overnight lows were as high as 90°F (Fillmore, in Ventura County) and 86°F (Van Nuys). Some locations stayed near 90°F all night except for just an hour or two when the winds slackened and the temperatures dropped to around 80°F. Even a weather station at 5655 feet, near the summit of Mt. Wilson, failed to dip below 65°F. 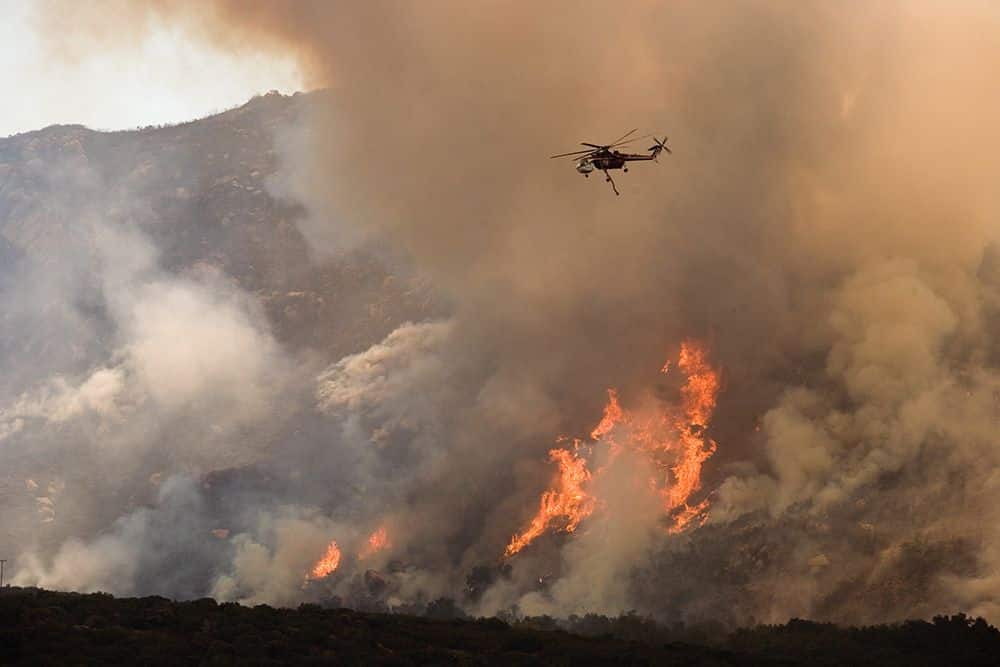 A helicopter drops water on a wildfire in California near the Mexico border.Andrea Booher / FEMA

The heat and wind will continue through Wednesday across the coastal ranges of Southern California, keeping fire danger at critical levels on both Tuesday and Wednesday as designated by the NOAA/NWS Storm Prediction Center. The very warm night Monday night gave temperatures a running start toward highs on Tuesday that could match or even exceed Monday’s at some locations (as was the case in Los Angeles, as noted above). Adding to the fire risk, winds were already gusting above 60 mph at some locations by midday Tuesday, and relative humidity on Tuesday night may remain as low as 10 to 15 percent, dropping below 10 percent as the air heats up by day. Winds should begin to relax across the area by Wednesday afternoon.

Hot temperatures pushed further up the California coast on Tuesday. Big Sur topped 100°F before noon, as did several other coastal locations. In San Diego, public schools closed early on both Monday and Tuesday because of the heat; by 2019, all of the district’s school buildings are slated to have air conditioning.

The temperature at first pitch for the 2017 World Series Tuesday at Dodger Stadium in Los Angeles was 103°F, the hottest beginning to any game in the century-plus history of the World Series, beating out the first-pitch reading of 94°F on Oct. 27, 2001 in Phoenix. In a weather.com overview last week, Jon Erdman noted, “While the Arizona Diamondbacks hosted the 2001 World Series in a retractable-roof stadium (then called Bank One Ballpark, now Chase Field), and would normally have closed the roof to shield fans from the desert heat, Major League Baseball wanted the roof open.”

Apart from the long-term warming of U.S. climate that’s resulting from human-produced greenhouse gases, there’s at least one other reason why we might expect World Series games to be warmer now than decades ago. Until the 1950s, all Major League Baseball teams were located in the Northeast, Midwest, and mid-Atlantic, prior to the major U.S. population shift toward the warmer Sunbelt. On the other hand, World Series games are being played later in October than they were during most of the 20th century, and all World Series games were played during the daytime until the 1970s. Both of these latter factors would tend to yield cooler rather than warmer first-pitch temperatures today as opposed to decades ago. 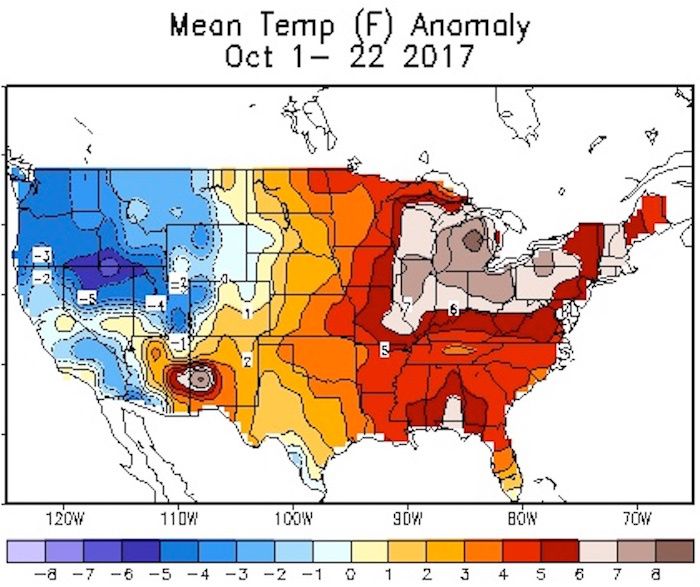 The first three weeks of October were remarkably mild for most of the U.S. east of the Rockies. Overnight lows across most of the Northeast on Monday night were in the 50-70°F range—warmer than the average highs for this time of year! Albany, NY, “dipped” to 68°F early Tuesday, compared to its average high and low for the date of 57°F and 37°F. If the temperature stays above 64°F through midnight, it’ll be Albany’s highest daily minimum ever recorded this late in the year, in data going back to 1874.

The Northeast’s unusually dry and unseasonably warm weather in both September and October has played havoc with the region’s world-famous fall foliage. In some areas, still-green leaves are sharing the same landscape with brilliant colors and leafless twigs. “This foliage season is very odd, to say the least,” reported the Foliage Network on Oct. 16. “For most locations, there won’t be a true peak in the color … there is great color to be seen, but complete landscapes of fall color will not be found this season.” 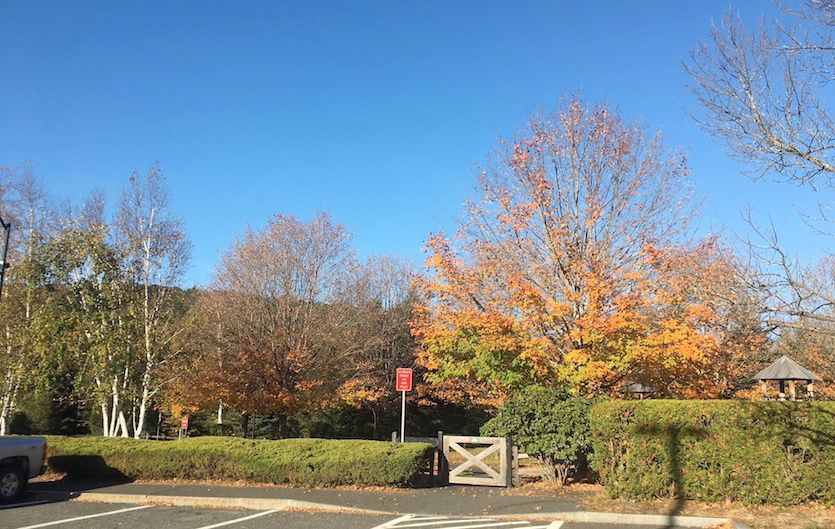 A mishmash of color greeted leaf-peepers at Guilford, VT (near the VT/MA border) on Oct. 18. In this area, foliage is typically peaking by mid-October.Bob Henson

These gulls appear to be enjoying the fall sunshine and warmer runway next to @NWSCaribou #mewx pic.twitter.com/bygNPItyaH

A cool front pushing across the Northeast on Tuesday, followed by a stronger front early next week, should bring the region closer to seasonal norms, but the cooldowns may not be enough to avoid some all-time monthly warmth. Below are several locations that could end up notching their warmest October on record, based on observations through Monday, Oct. 23, combined with WU forecasts through Oct. 31.

Keeping an eye on 93L

A disturbance dubbed Invest 93L continues to spawn widespread but disorganized showers and thunderstorms across the Western Caribbean, a notorious breeding ground for late-season hurricanes. In its tropical weather outlook issued at 8 pm EDT Tuesday, the NOAA/NWS National Hurricane Center gave 92L a 10 percent chance of developing into at least a tropical depression by Thursday and a 50 percent chance by Sunday. See our Tuesday morning post for more details on 93L.