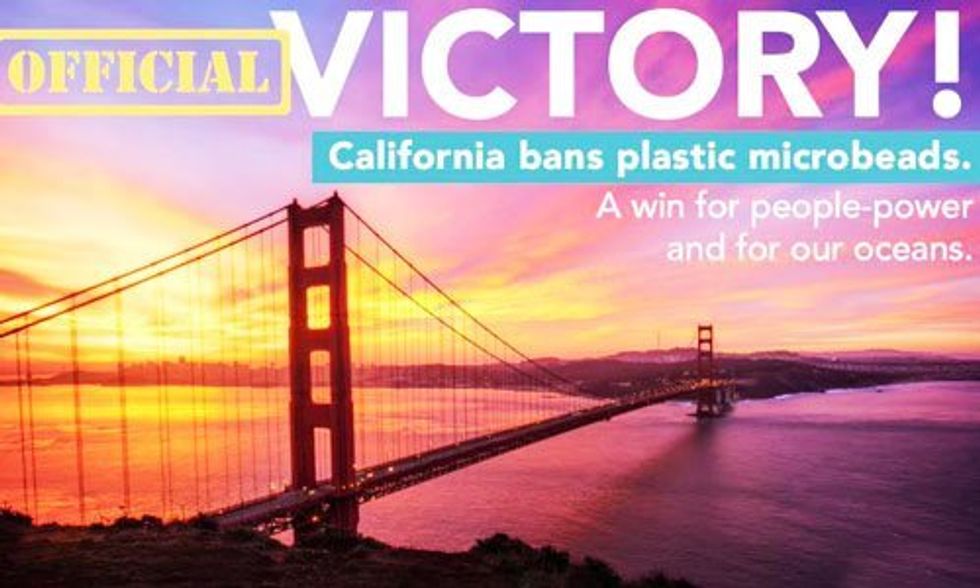 Yesterday, California Gov. Jerry Brown signed the nation’s toughest ban on personal care products containing plastic microbeads, such as toothpastes, soaps and scrubs designed to be rinsed down the drain. Assembly Member Richard Bloom (D-Santa Monica) authored AB 888 after trillions of the tiny spheres of plastic ended up in rivers, lakes and oceans, where they are mistaken for food by fish and other wildlife.

It's official: @JerryBrownGov has signed the strongest microbead legislation in the world! #bandthebead #victory http://t.co/IEheOhSocB
— The Story of Stuff (@The Story of Stuff)1444333479.0

“AB 888 is a comprehensive solution to the growing problem of microbead pollution. A recent study found a staggering amount of micro-plastic pollution in the San Francisco Bay but these beads have also been found in the open ocean, rivers and the Great Lakes,” said Assembly Member Bloom. “California steps forward to lead the nation in environmental protection by banning this pervasive source of plastic pollution. While other states have passed similar regulations, AB 888 was carefully crafted to avoid any loopholes that would allow for use of potentially harmful substitutes. This legislation ensures that personal care products will be formulated with environmentally-safe alternatives to protect our waterways and oceans.”

According to CASA, after plastic microbeads are rinsed down the drain, their small size allows them to often bypass wastewater treatment filters. They then end up in local waterways and eventually the ocean where they attract chemicals such as PCBs and flame retardants to their surfaces. This can pose a threat to human health when fish and other organisms mistake them for food and the toxins make their way up the food chain.

“It never made sense to put billions of bits of plastic in products designed to be rinsed down the drain, polluting water and threatening wildlife,” said Mark Murray, executive director of Californians Against Waste. “California has adopted the strictest ban on polluting plastic microbeads in the nation and it will serve as the defacto national standard.”

Unlike plastic microbead bans passed in other states, AB 888 does not allow for companies to use plastic microbeads that are made of new formulations of plastic that their producers claim are safe or “biodegradable” because such claims have not been scientifically proven.

“The sponsors and author of the California Microbeads Bill drafted our policy to be the most environmentally responsible in the world. We simply banned plastic microbeads of any kind,” said Stiv Wilson, campaigns director for the Story of Stuff Project. “If industry wants to use a form of biodegradable plastic, they’re going to have to prove it’s totally safe before they can use it. We are not taking their word for it. Johnson & Johnson and Procter & Gamble fought us every step of the way, never producing a shred of evidence about the safety of their so-called ‘green innovation’ alternatives. The state of California called their bluff.”

The 5 Gyres Institute, a leading research organization focusing on plastic pollution in the world’s oceans, recently discovered microbeads on a research expedition in the Great Lakes, where they found as many as 466,000 microplastics per square kilometer. And in California, the institute estimates that 471 million microbeads are dumped into the San Francisco Bay every single day.

“Our research estimates that there are over 5 trillion pieces of plastic in the world’s oceans. AB 888 will eliminate a significant contributor of plastic pollution at the source, before it ever has a chance to reach the oceans,” said Anna Cummins, executive director of the 5 Gyres Institute. “We are proud to cosponsor legislation that will give California the strongest protection in the country from harmful plastic microbeads.”

“The shocking part about the fight to get AB 888 passed in California is that plastics are a major but totally avoidable form of toxic pollution in a state with limited water resources,” said Andria Ventura, toxics program manager for Clean Water Action. “Safe alternatives have been on the market since before plastic existed. Clean Water Action’s members overwhelmingly supported this bill because they don’t want to contaminate our waters by the simple action of washing their faces.”

AB 888 takes effect on Jan. 1, 2020 and will keep an estimated 38 tons of plastic pollution out of California’s freshwater and marine environments every year.

Do You Live Near One of the 1,300 Most Toxic Sites in America?