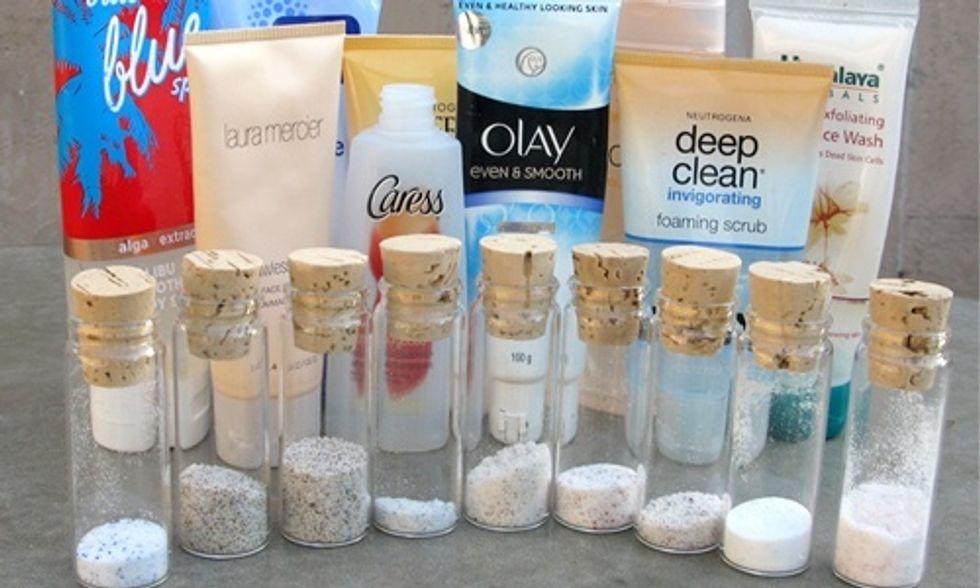 Legislation to ban plastic microbeads commonly used in personal care products from being used in products such as facial scrubs, soaps and toothpaste passed the California State Assembly Friday on a 58-11 vote. The legislation, AB 888, authored by Assemblymember Richard Bloom (D-Santa Monica) and first sponsored in 2014 by LA based environmental organization the 5 Gyres Institute, would set up the strongest protections in the country against the use of these unnecessary and toxic additives.

Microbeads have emerged as a pervasive form of pollution in our waterways and marine environment, contributing approximately 38 tons of plastic annually. Photo credit: 5 Gyres

“This is an incredibly exciting time for California, and for 5 Gyres,” said Dr. Marcus Eriksen, 5 Gyres’ director of research and the first U.S. scientist to document microbeads in U.S. waters.

“When we first detected high levels of plastic microbeads in Lake Erie in 2012, we never imagined that this scientific finding would result in a national legislative campaign. This important step towards a victory in California sends a strong signal that the public sector can drive major design changes at the corporate manufacturing level, to protect our national waters and our health.”

The 5 Gyres Institute, an LA-based non-profit organization dedicated to engaging people in policy and design solutions to plastic pollution, conducted the first scientific research on plastic pollution in the Great Lakes in 2012, in partnership with SUNY Fredonia. On this expedition, the team documented high levels of microplastics in Lake Erie that they later traced back to personal care products.

“We found one sample with 1,600 plastic particles, more plastics by count than any of our ocean samples spanning over 50,000 miles,” said Dr. Eriksen. “These particles were all roughly the same shape and size—we had never seen anything like it. We compared these to the plastic beads found in facial scrubs and body washes, and there it was. With this finding, we were able to begin working on the clear solution—banning these unnecessary toxic plastics from products deigned to be washed down the drain.”

Microbeads have emerged as a pervasive form of pollution in our waterways and marine environment, contributing approximately 38 tons of plastic annually. The tiny particles are prevalent in ocean debris piles, the Great Lakes, and were found in the Los Angeles River last year. Most microobeads are not biodegradable and absorb various toxins such as DDT, PCBs (flame retardants) and other industrial chemicals and are ingested or absorbed by a variety of marine life and other mammals. Because fish ingest these particles and absorb the toxins in their flesh, many in the scientific community also worry about the impacts on the fish, crabs and shellfish that humans eat.

Though they seem tiny, the size of microbeads is actually the biggest problem. Plastic microbeads used as exfoliants are too small to be recovered through most wastewater treatment plants, and wash directly down the drain, or are discharged into the environment through combined sewage overflow. As a result, these plastic microbeads can we washed into rivers, lakes and ultimately oceans, where they threaten marine ecosystems via the food web. A single product can contain as much as 350,000 polyethylene or polypropylene microbeads.

Many fish species, including fish that humans harvest for food, have been known to ingest micro-plastic particles and the toxins absorbed in those plastics can transfer to the fish tissue, becoming increasingly concentrated as they work their way up the food chain to wind up ultimately on our dinner plate.

“This is not a problem without a solution. Plastic microbeads are not essential to personal care products," said Rep. Bloom. "Safe and natural alternatives are available such as walnut husks, pecan shells, apricot shells, and cocoa beans. Some brands already use environmentally safe alternatives. However, there are still a number of companies who are holding out. By passing this bill, we will take the first step in phasing out these damaging products completely in California and paving the way for other states and countries to follow our lead."

Lisa Kaas Boyle, Esq., 5 Gyres policy director and one of the authors of the legislation, states, “AB 888 is a perfect example of 5 Gyres’ mission to conduct the best science, craft effective legal policy solutions based on our research, and find the best representatives of the people to carry the legislation through the halls of government to become law. We identified Richard Bloom because of his long history of environmental stewardship on the California Coastal Commission, as a city council member and mayor of Santa Monica and in his current office as representative of the people of the 50th District of California.”

AB 888 has now passed the State Assembly and must now pass the State Senate before going to Gov. Jerry Brown for his consideration.