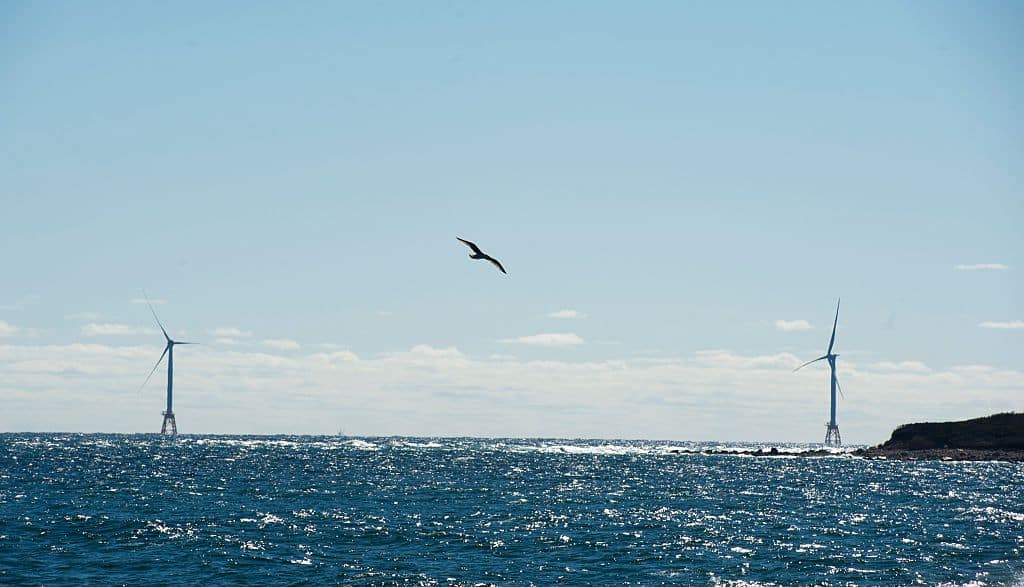 The United States’ first auction of offshore wind development leases off the California Coast brought in bids of $402.1 million on Tuesday, as the carbon-free electricity market expanded into the Pacific Ocean.

The auction, which continued Wednesday morning and represents a major step in the decarbonization of electricity and the fight against climate change, positions the U.S. as a leader in floating wind turbine expansion, reported Reuters.

“Offshore wind is a critical component to achieving our world-leading clean energy goals and this sale is a historic step on California’s march toward a future free of fossil fuels,” California Governor Gavin Newsom said in a statement, as CalMatters reported.

More From EcoWatch in California

Last year, President Joe Biden promised to have 30 gigawatts of offshore wind-producing power in the U.S. by 2030.

The bidding on this week’s offshore wind lease sale in California lasted more than seven hours with 20 rounds of bidding, reported Reuters. According to the U.S. Department of the Interior, the projects that will be developed on the leases could eventually power a total of 1.5 million homes.

Five areas of 373,267 total acres are being leased by the Interior Department’s Bureau of Ocean Energy Management (BOEM) off the north and central coasts of California.

Ten lease sales have been held, and 27 commercial wind leases have been issued, by the federal government in the Atlantic Ocean, according to BOEM, CalMatters reported. The two offshore wind farms currently in operation in the shallower waters off the Atlantic Coast are able to generate a total of 42 megawatts of electricity.

Two offshore wind auctions for development rights off the coasts of New Jersey and New York held earlier this year by BOEM brought in a record $4.37 billion in bids, reported Reuters.

Unlike existing offshore wind turbines in the U.S., which are in relatively shallow waters and anchored to the sea floor on fixed structures, California’s wind turbines will float around 20 miles offshore, attached to cables that stretch several thousand feet to the bottom of the ocean, CalMatters reported. The offshore wind farms off the coast of California would be the first large-scale floating platforms in the U.S.

“The U.S. still has an opportunity to lead in floating technologies,” said Executive Director of the University of Maine’s Advanced Structures and Composites Center Habib Dagher, as reported by CalMatters. “But we need to move forward on the technology side and keep investing in research and development.”

Environmental groups, as well as researchers, have expressed concern about the environmental risks of floating wind turbines. Environmental attorney with the Natural Resources Defense Council Irene Gutierrez said there is the possibility of bats and birds getting caught in the turbines, and fish, marine mammals and sea turtles getting entangled in the cables.

“There’s a lot that we don’t know about offshore wind in the West and what that means for various marine and coastal ecosystems,” Gutierrez said, as CalMatters reported.

Gutierrez said more research must be done, and that researchers and developers, as well as state and federal agencies, must regularly monitor the effects of the floating wind turbines on the animals’ habitats.

The National Audubon Society is committed to working with the Biden administration to reduce the wind industry’s effects on birds, reported E&E News.

These Artists Are Turning Their London Street Into a Solar Power Station
The climate crisis, the energy crisis in Europe and rising
By Cristen Hemingway Jaynes
Emirates Successfully Tests Flying Boeing 777 Plane on Sustainable Jet Fuel
The airline Emirates has successfully tested flying a Boeing 777-300ER
By Paige Bennett
U.S. Lawmakers Want Climate Envoy Kerry to Push Back on Naming Oil CEO as Head of COP28
The decision of the United Arab Emirates (UAE)’s to name
By Olivia Rosane