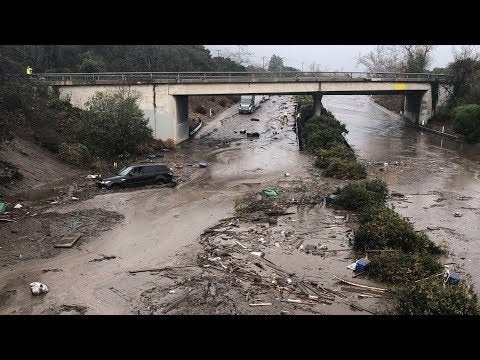 Editor’s Note: As of 7:30 am EST Thursday the California mudslides death toll has risen to 17. Southern California, which just endured the largest
wildfire in state history, is being bombarded by flooding and destructive mudslides triggered by torrential downpours.

Thousands of Californians who were already forced to flee their homes due to last month’s horrific wildfires were also ordered to evacuate over threat of mudslides.

At least 15 people were killed and more than two dozen were injured as of Wednesday, according to the
New York Times. Another two dozen people are missing.

“We don’t know how many additional people are still trapped,” Santa Barbara County Sheriff Bill Brown
said on CBS This Morning. “We know there are some, and we’re still making our way into certain areas of Montecito and the adjacent areas to determine if anyone is still there and still alive.”

Emergency helicopters airlifted about 50 people to safety on Tuesday,
according to Kevin Taylor of the Montecito Fire Department. The video below shows rescuers helping a driver whose car was swept away by the mud.

Victim who was swept away in their vehicle was located by the crew of AirSquad6. Victim was hoisted and flown to awaiting ground personnel. pic.twitter.com/RvX743x0yi

As the Times pointed out, the devastation is “not a coincidence but a direct result of the charred lands, left vulnerable to quickly forming mudslides.”

The December wildfires not only scorched away grass, shrubs and other vegetation that hold soil in place, but they also baked a waxy layer into the Earth that prevented the rains from being absorbed into the ground, Reuters explained.

“This means that flooding and debris flows are imminent or occurring in these areas,” Santa Barbara County officials announced. “Avoid riverbeds, creeks, streams, low-lying areas and areas with standing water.”

According to a new report from the National Centers for Environmental Information, a division of the National Oceanic and Atmospheric Administration, 2017’s string of massive wildfires in the west cost a total of $18 billion, tripling the previous U.S. annual wildfire cost record.

The federal agency’s report noted that 2017 was the third warmest year since record keeping began in 1895. The average annual temperature for the contiguous U.S. last year was 54.6 degrees Fahrenheit, 2.6 degrees above the 20th century average.

While the wildfires in the west are not directly linked to climate change, the Union of Concerned Scientists has warned that “the effects of global warming on temperature, precipitation levels and soil moisture are turning many of our forests into kindling during wildfire season.”

“The costs of wildfires, in terms of risks to human life and health, property damage, and state and federal dollars, are devastating, and they are only likely to increase unless we better address the risks of wildfires and reduce our activities that lead to further climate change,” the organization said.