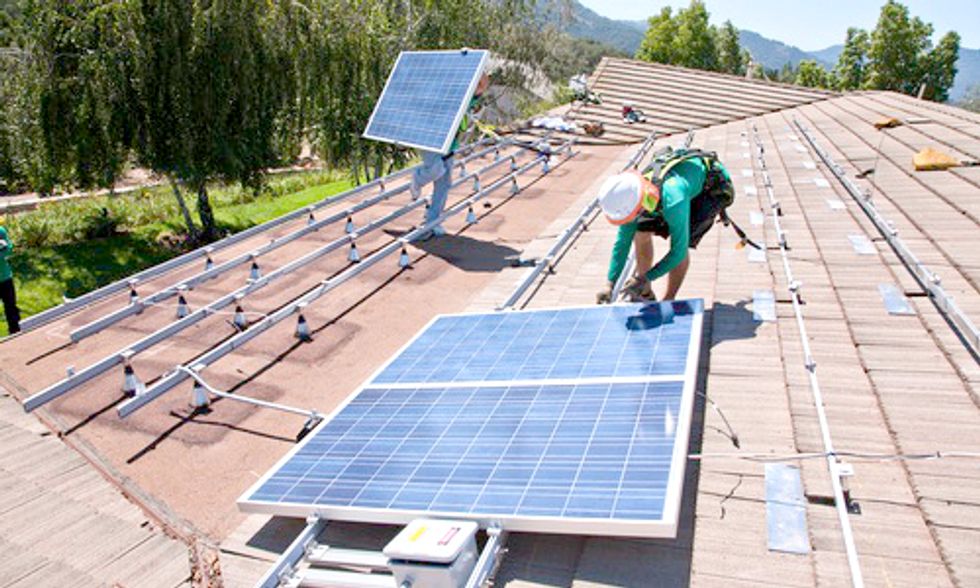 2013 was a banner year for clean energy, and the U.S. solar industry was no exception. California, the nation’s solar standout, more than doubled its rooftop solar installations last year from 1,000 megawatts (MW) to 2,000 MW.

To put this number in perspective, writes Bernadette Del Chiaro of the California Solar Energy Industries Association, it took California more than 30 years to build the first 1,000 MW of rooftop solar.

Workers install solar panels on the roof of a house in Oak View, Southern California.
Photo courtesy of Shutterstock

And California isn’t alone in its rooftop solar surge. “About 200,000 U.S. homes and businesses added rooftop solar in the past two years alone—about 3 gigawatts of power and enough to replace four or five conventionally-sized coal plants,” Bloomberg reported.

As record numbers of homes and businesses decide to go solar, utility companies are growing increasingly uneasy about the threat it poses to their existing business model. If more customers install solar panels or adopt energy efficiency measures, a utility will sell fewer units of energy—especially during peak demand when energy costs are the highest. Therefore, utilities will increase their energy prices to cover costs such as grid maintenance and labor and as prices go up, more customers will look to energy efficiency and distributed energy resources to reduce their energy bills, perpetuating the cycle.

Net metering, the process that enables customers to be compensated for excess energy produced by solar panels on their homes and businesses, has become a particular point of contention between utilities and solar advocates. Utilities argue that customers who generate their own power receive too much credit while solar advocates counter that the incentives are critical to the growth of their industry.

According to Bloomberg, net metering fights have broken out in as many as twelve of the 43 states that currently have policies in place. In Arizona, regulators deferred their heated solar battle by agreeing to charge rooftop solar owners a modest monthly fee. California also compromised by extending the net metering program but opening the possibility of rate restructuring in the future. Colorado’s Xcel Energy has proposed cutting the compensation it provides for excess energy by about half, “because it says higher payouts result in an unfair subsidy to solar users.” And Hawaii, where customers pay the highest energy prices in the nation, the rush to install rooftop solar was so strong that the state’s largest utility has blocked new rooftop solar customers from connecting to the grid. The move puts “hundreds if not thousands of the state’s residents are being put in solar limbo by a virtual moratorium on new connections in many parts of the company’s service area,” Bloomberg reported.

Net metering has also attracted the attention of the American Legislative Exchange Council (ALEC), a secretive group backed by corporations, fossil fuel interests and the Koch brothers. Last year, ALEC failed in each of its campaigns against clean energy but the organization shows no sign of slowing the attacks next year. Characterizing homeowners with their own solar panels as “freeriders on the system,” John Eick of ALEC’s energy, environment, and agriculture program told the Guardian net metering “is an issue we are going to be exploring.”

At its December meeting, ALEC members took up a draft resolution that calls on state legislators to “update net metering policies to require that everyone who uses the grid helps pay to maintain it and to keep it operating reliably at all times.”

GTM Research recently forecast that by the time the books were closed on 2013, more than 400,000 solar projects will be operating across the U.S. and installations will have grown 27 percent over 2012, with a 52 percent growth rate in the residential sector alone. But the report also cautioned that “challenges to net energy metering regulations present a looming threat to the market.”

In California, “rooftop solar continues to face battles on multiple fronts with regards to net metering, incentives for solar heating and cooling systems, the future of tax credits, and the reining in of permitting and interconnection costs and obstacles,” Del Chiaro writes.

“Whether California continues this historic growth depends largely on policy decisions to be made in 2014.”