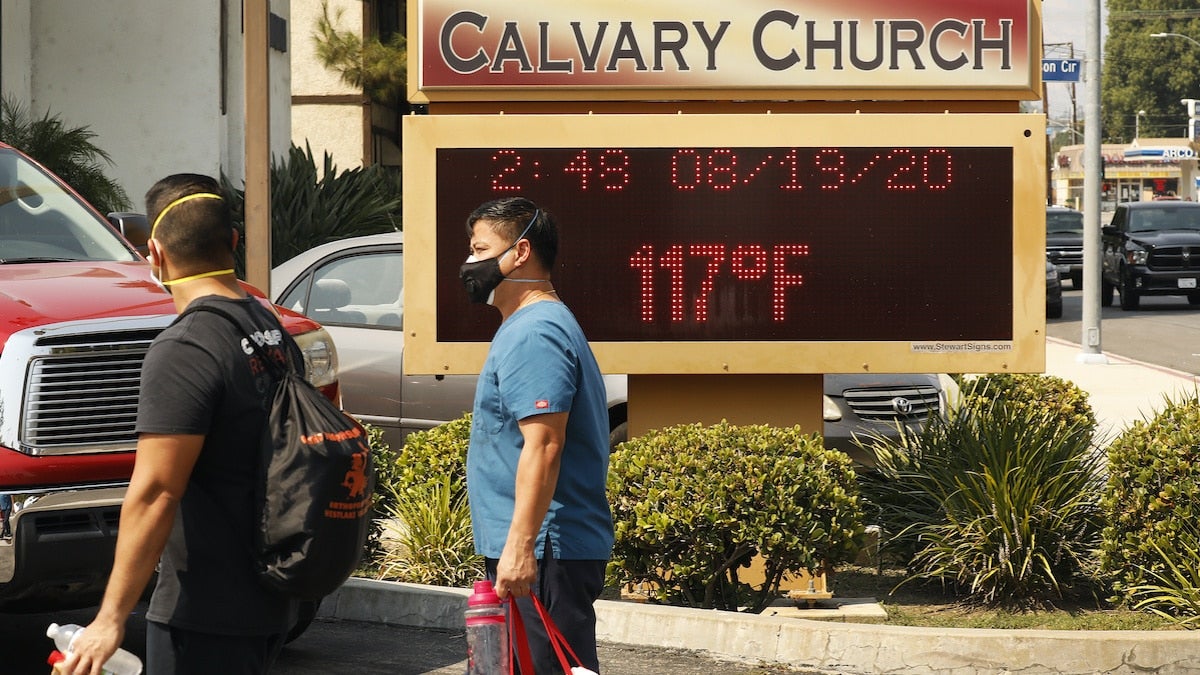 The traditional end of summer weekend will feel more like mid-July in the West.

The National Weather Service is not mincing words about what’s in store for Southern California this weekend as it warns of “dangerous heat expected Friday through Labor Day.” The warning says that triple digit temperatures are expected away from the beaches with 115 degree temperatures possible in the San Fernando Valley, as well as an elevated risk of fire.

“A widespread heat wave with record high temperatures expected will bring dangerous heat and elevated fire weather conditions nearly everywhere Friday through at least Labor Day,” the Weather Service says, as The Washington Post reported. “There is an exceptional risk for heat illness and power outages.”

Just a couple of weeks ago, the state was seeing record-breaking heat that strained the power grid and forced rolling blackouts, as EcoWatch reported. This heat wave won’t be as humid and as sticky as the last one, but it does come at a time when firefighters are still working to contain the second and third largest wildfires in state history, according to The Washington Post.

The heat will begin Friday and continue through the weekend, peaking on Sunday. The heat will also cover a large expanse of the West, with excessive heat in California, Nevada and Arizona. The temperatures in Los Angeles are expected to reach 107 degrees on Saturday and 106 in Sacramento on Sunday, according to Bloomberg.

“Bad things can happen with this kind of heat,” said Joe Sirard, a meteorologist with the National Weather Service, to The Los Angeles Times.

The state’s power grid operator ordered all work on transmissions lines to be postponed so there is enough electricity running through the system over the weekend.

“With the fires and the wear and tear on units, this weekend could be ugly,” said Campbell Faulkner, senior vice president and chief data analyst at OTC Global Holdings, a commodities broker, to Bloomberg. “It’s just a really difficult spot for California.”

The heat will even extend up to Oregon, which is under a heat advisory.

“High pressure building in the west will contribute to temperatures being 15-20 degrees above average for much of Oregon by Thursday,” the National Weather Service office in Portland said in an urgent weather message Tuesday, as NBC News reported.

The temperatures around Los Angeles may not only be the hottest for September, but may actually break a record for the hottest on record ever, according to The Washington Post.

“The heat wave building for most of the West is just plain mean for September,” wrote Bill Kairns, a meteorologist for NBC News on Twitter. “More fire danger, poor air quality and record highs.”

The two large wildfires that have destroyed thousands of acres near the Bay Area are still technically alive. However, recent mild weather has allowed firefighters to get them under control, so they are both now more than 70 percent contained, according to NBC News.

“With this heat coming, any new starts could create problems,” said Lynne Tolmachoff, a Cal Fire spokesperson, as NBC News reported. “We’re staffed up. With the holiday there’s going to be a lot of people out recreating. We’re asking people to stay safe and don’t start new fires.”

Scientists have already noticed that the vegetation in the state seems highly stressed over the last few months and conditions are near record levels of dryness. Right now, shrubs are drier than they were in 2018, when the state had record wildfires. That has raised the concern that this weekend’s excessive heat could put several areas back into record levels of dryness and catalyze fires that spread rapidly and are impossible to control, according to The Washington Post.