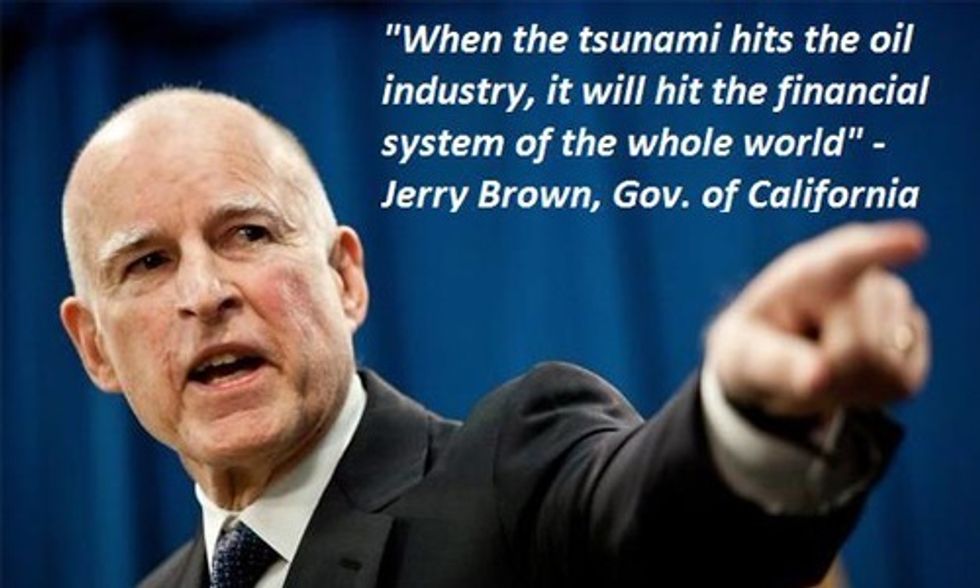 As Governor of California Jerry Brown signed a much-applauded bill into law on Thursday, fossil fuel divestment activists celebrated as the two largest public pension funds in the U.S. will now be forced to divest from any company whose primary profits are related to the mining or use of thermal coal.

The new law, introduced by Senate leader Kevin de León (D-Los Angeles) as S.B. 185, requires that both the California Public Employees' Retirement System (CalPERS) and California State Teachers Retirement System (CalSTRS) sell such holdings by July of 2017. Any future investments in coal mining or highly-related businesses are also prohibited by the law.

According to the Los Angeles Times:

"Coal is a losing bet for California retirees and it’s also incredibly harmful to our health and the health of our environment," he said in a statement.

In response to the news, executive director of 350.org  May Boeve, whose group has led the charge for institutional divestment, championed the effort in California.

"This is a big win for our movement, and demonstrates the growing strength of divestment campaigners around the world," said Boeve. "California’s step today gives us major momentum, and ramps up pressure on state and local leaders in New York, Massachusetts, and across the U.S. to follow suit—and begin pulling their money out of climate destruction too."

Though the development was welcome, Boeve said there was still plenty more that Gov. Brown and lawmakers across the country must do in order to be considered "part of the solution" when it comes to the climate crisis.  For Brown, she said, it's time "to keep building on today’s news, and take every possible step to prevent climate catastrophe—including divesting California from oil and gas, and banning extreme energy extraction techniques like fracking."