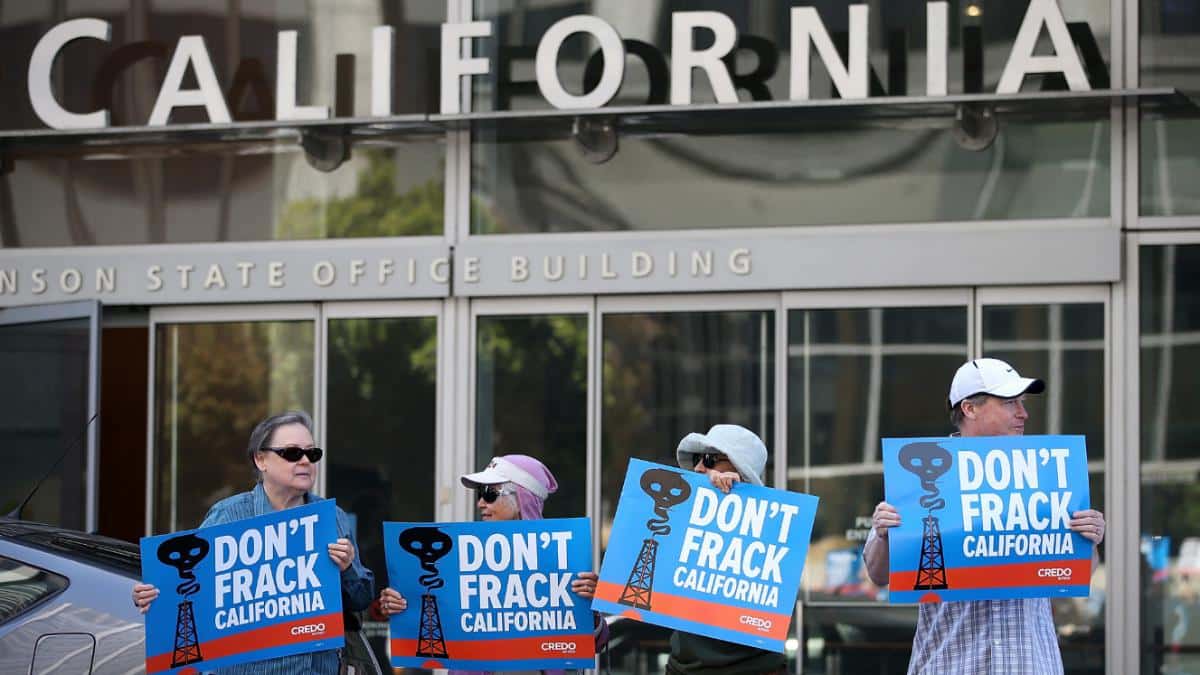 Protestors stage a demonstration against fracking in California on May 30, 2013 in San Francisco, California. Justin Sullivan / Getty Images

The bill, SB467, would have prohibited fracking and other controversial forms of oil extraction. It would also have banned oil and gas production within 2,500 feet of a home, school, hospital or other residential facility. The bill originally set the fracking ban for 2027, but amended it to 2035, The AP reported.

“Obviously I’m very disappointed,” State Sen. Scott Wiener (D-San Francisco), one of the bill’s two introducers, told the Los Angeles Times. “California really has not done what it needs to do in terms of addressing the oil problem. We have communities that are suffering right now, and the Legislature has repeatedly failed to act.”

The bill was introduced after California Gov. Gavin Newsom said he would sign a fracking ban if it passed the legislature, though his administration has continued to issue permits in the meantime, Forbes reported. Newsom has also spoken in favor of a buffer zone between oil and gas extraction and places where people live and learn, according to the Los Angeles Times. The latter is a major environmental justice issue, as fossil fuel production is more likely to be located near Black and Latinx communities.

Urban lawmakers who want California to lead on the climate crisis supported the bill, while inland lawmakers in oil-rich areas concerned about jobs opposed it. The oil and gas industry and trade unions also opposed the bill.

This opposition meant the bill failed to get the five votes it needed to move beyond the Senate’s Natural Resources and Water Committee. Only four senators approved it, while Democrat Sen. Susan Eggman of Stockton joined two Republicans to oppose it, and two other Democrats abstained.

Eggman argued that the bill would have forced California to rely on oil extracted in other states.

“We’re still going to use it, but we’re going to use it from places that produce it less safely,” Eggman told The AP. She also said that she supported the transition away from fossil fuels, but thought the bill jumped the gun. “I don’t think we’re quite there yet, and this bill assumes that we are,” she added.

Historically, California has been a major U.S. oil producer. Its output peaked in 1986 at 1.1 million barrels a day, just below Texas and Alaska, according to Forbes. However, production has declined since then making it the seventh-most oil-producing state.

Still, California’s fossil fuel industry is at odds with state attempts to position itself as a climate leader.

“There is a large stain on California’s climate record, and that is oil,” Wiener said Tuesday, according to The AP.

“While we saw this effort defeated today, this issue isn’t going away,” they wrote in a joint statement. “We’ll continue to fight for aggressive climate action, against harmful drilling, and for the health of our communities.”