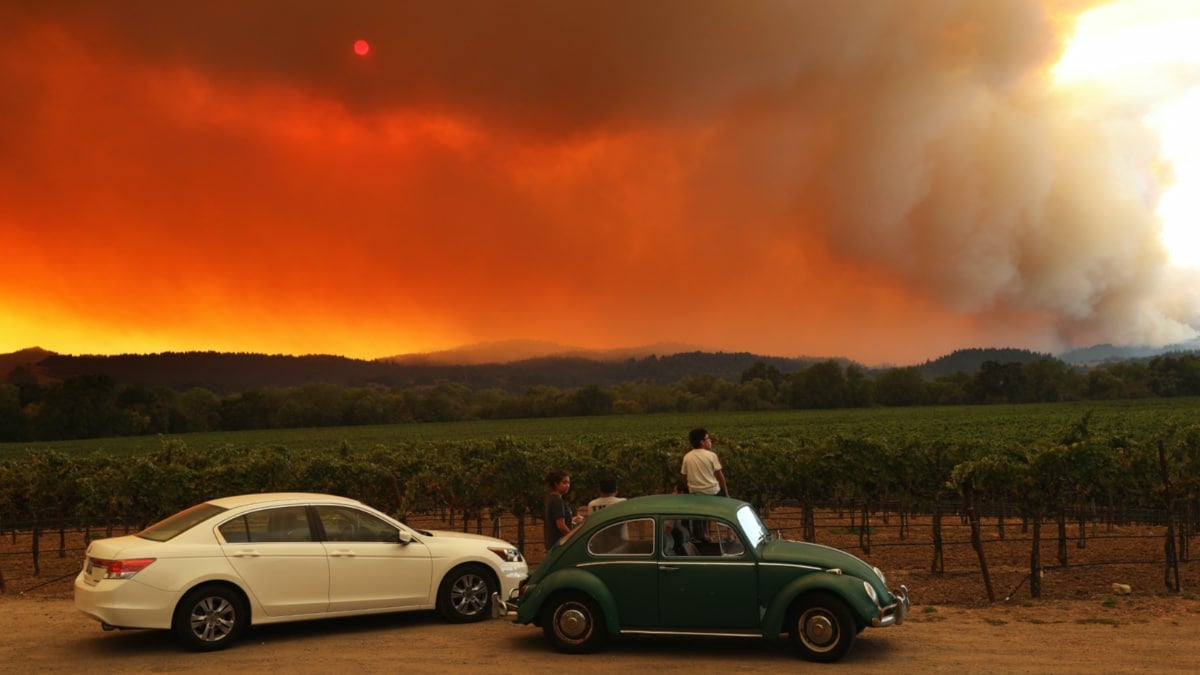 Local residents sit next to a vineyard as they watch the LNU Lightning Complex fire burning in nearby hills on August 20, 2020 in Healdsburg, California. Justin Sullivan / Getty Images

Especially given the climate-fueled wildfires ravaging the region, conservationists sounded alarm Thursday in response to a Trump administration proposal for an oil and gas lease sale in California, which would be the state’s first such federal auction in eight years.

At issue are over 4,300 acres of public land in Kern County, an area recently dubbed “the oil industry’s political power center.” The Bureau of Land Management (BLM) released a draft environmental assessment of the plan Wednesday for the sales, which would occur by the end of the year.

A BLM statement announcing the proposal notes that California allows fracking—much to the ire of environmental groups.

The proposal comes as California continues to reel from massive wildfires that have stretched firefighting resources thin and burned over 1.25 million acres amid a heatwave and the coronavirus pandemic.

“It’s breathtakingly vicious for the Trump administration to expand drilling and fracking while California battles historic wildfires driven by climate change,” Clare Lakewood, an attorney at the Center for Biological Diversity, said in a statement.

Lakewood said that if the sales go through, adverse impacts on the climate will be guaranteed.

“More oil wells mean more greenhouse gases, more air pollution, and more destroyed habitat,” she said, and warned that “selling this public land to oil companies will do significant harm to our environment, despite the administration’s ridiculous claims.”

Drilling leases haven’t been offered in the state since a federal judge ruled in 2013, based on a legal challenge from the Center for Biological Diversity and the Sierra Club, that BLM acted unlawfully in issuing oil leases in Monterey County without considering the environmental impacts of fracking.

Other bids by the federal government to open public lands in California to fossil fuel drilling have suffered similar fates. The Trump administration’s proposals last year to offer up over 1 million acres of public land to oil drilling are the subject of ongoing litigation, the Center for Biological Diversity noted.

“We’ve blocked any new federal leasing in California in court for eight years now, and we’ll fight this too,” said Lakewood.