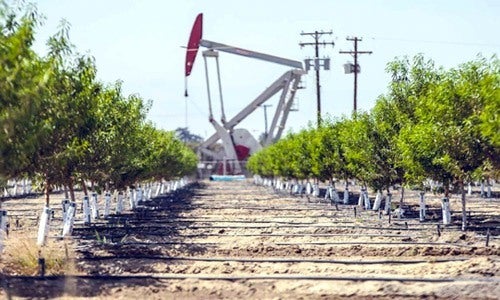 When most people think of California, the first images that probably come to mind are the state’s sun-soaked beaches, the Hollywood hills and the fog-drenched Golden Gate Bridge. But a new documentary web series, Spotlight California, wants to show viewers the California you don’t see on postcards.

The five-part series, hosted by actress and comedian Kiran Deol, is investigating the impact of drought, water and air pollution, and gas price gouging in California.

The goal is to “raise awareness of these issues, give voice to the Californians being directly impacted and create an opportunity for people to join together and to take positive actions in communities across the state,” explained NextGen Climate, which is funding the project.

“With this project, I want to shed some light on the powerful players who have tilted the economic tables in their favor, profiting at the expense of our families,” Tom Steyer, president of NextGen Climate, said. “But I also want to highlight stories from people working hard to balance the scales; folks who maintain a positive attitude during tough times, while making a big difference.”

The first episode, which aired Jan. 26, took viewers into the heart of the drought, where half the residents of the low-income community of East Porterville in the Central Valley struggle to find fresh water.

The second episode, which aired last week, highlighted another aspect of the drought. It shows how farmers are using treated oil wastewater to irrigate their crops, despite the fact that nobody has tested the wastewater to see if it’s safe.

“There are farmers so desperate for water in one particular irrigation district called Cawelo, they’re taking some wastewater to irrigate crops from Chevron. It’s being used to grow food for people—citrus crops, grapes, pistachios,” Tom Frantz told Deol in the episode.

“You grow an orange—it’s 90 percent water when it gets to the consumer,” Frantz continued. “Where did that water come from? It’s the irrigation water. The irrigation water is toxic, even at very tiny amounts. Is there a tiny amount of toxicity now in the fruit? Nobody is testing that yet. And they’re salting up their soil by using this water, which means ultimately they’ll have to stop growing everything.”

Seth Shonkoff of PSE Healthy Energy explained to Deol that “until we have a list of the chemicals that are going into oil and gas wells and in what volumes and what are their toxicities, we’re flying blind.”

In order to find out the health impacts of using recycled oil water on crops, Deol joined water scientist Scott Smith as he covertly tested the water for toxic chemicals at the Cawelo wastewater treatment plant.

“We found oil and these nasty solvents,” which can cause “kidney damage, liver damage and cancer,” Smith said.