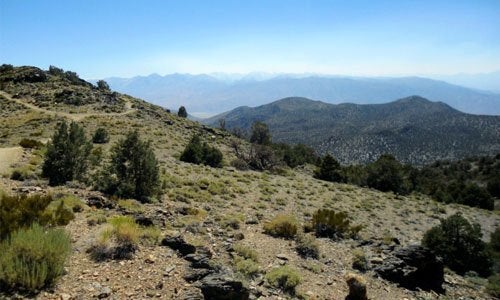 The snowpack for the state of California—a critical source of drinking water for the state—hit its lowest level in the last 500 years, according to a study published yesterday in Nature. When the snowpack was measured in April—historically the high point for the season’s snowpack—it was just 6 percent of average for the past century.

California’s 2015 Sierra Nevada mountains snowpack was “the worst in the past 500 years” http://t.co/v0NzH7AXdQ pic.twitter.com/v61PIWq4IG

Now, thanks to this latest study, we know that the snowpack hasn’t been this low in at least five centuries. The study used tree-ring data from centuries-old blue oaks to provide historical context for this year’s extremely low snowpack. The paper is the first of its kind in describing temperature and precipitation levels in the Sierra Nevada “that extends centuries before researchers started measuring snow levels each year,” says The New York Times. 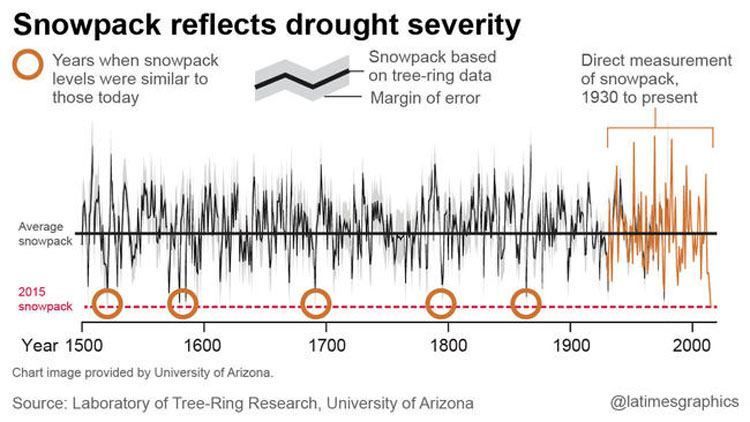 The latest findings reveal the 2015 snowpack was far below normal for the last 500 years. Photo credit: Laboratory of Tree-Ring Research, University of Arizona

“The 2015 snowpack in the Sierra Nevada is unprecedented,” Valerie Trouet, one of the authors of the study, told The Times. “We expected it to be bad, but we certainly didn’t expect it to be the worst in the past 500 years.”

Last winter was the hottest on record for California, so the little precipitation the state received often fell as rain and not snow. This has grave implications for the state’s water supply because snowmelt provides one-third of the state’s drinking water and is also critical for fighting the state’s increasing wildfires. California is in the midst of a four-year drought that has produced devastating wildfires like the Valley Fire in Northern California, which is happening right now. This past spring, NASA scientist Jay Famiglietti warned that Californians only have one year of water left in the state’s reservoirs. 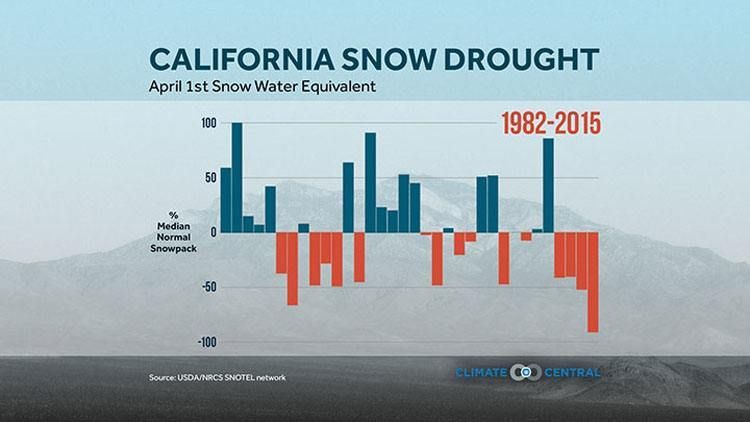 Over the last few years, winter precipitation has been far below normal, sending the state into a deep drought. Photo credit: Climate Central

“The scope of this is profound,” Thomas Painter, a snow hydrologist with NASA’s Airborne Snow Observatory, told The Times. “This has been a very bad drought, and being able to understand the context of it is extraordinarily important.”

To determine snowpack levels that far back, researchers combined two data sets of blue oak tree rings. “The first set provided historical precipitation levels from more than 1,500 blue oaks from 33 sites in California’s Central Valley,” explains The Times. “The team compared part of that data from the years 1930 to 1980 with actual snowpack measurements and found that both findings matched. Using this correlation, the team combined the precipitation data with a second data set of tree rings that looked at winter temperatures from 1500 to 1980.” Based on the 500-year record, researchers estimated the odds of such a low snowpack happening more than once over that time period were less than five percent. 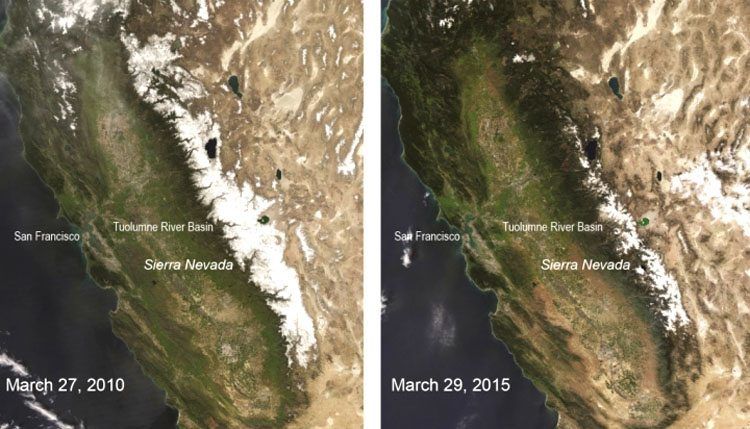 “It’s shocking in a historical context because we’ve never seen this bad of a snowpack. It was not shocking in the sense that we sort of knew this was coming, and we just didn’t know when,” Gleick told Climate Central. “This is the new unpleasant reality” for Western water, not just California.

And don’t expect the strong El Niño to “solve the drought” as warmer Pacific Ocean waters are expected to bring lots of precipitation to California this winter. Even if the state receives the much-needed rainfall, the storms might not produce a larger snowpack. If temperatures remain above-average as expected, much of that precipitation could fall as rain and not snow even at higher elevations—just as they did this past winter. Furthermore, Kirsten James at Ceres explains that because of climate change and poor water management, El Niño—not even a Monster El Niño—can’t save California from its epic drought.