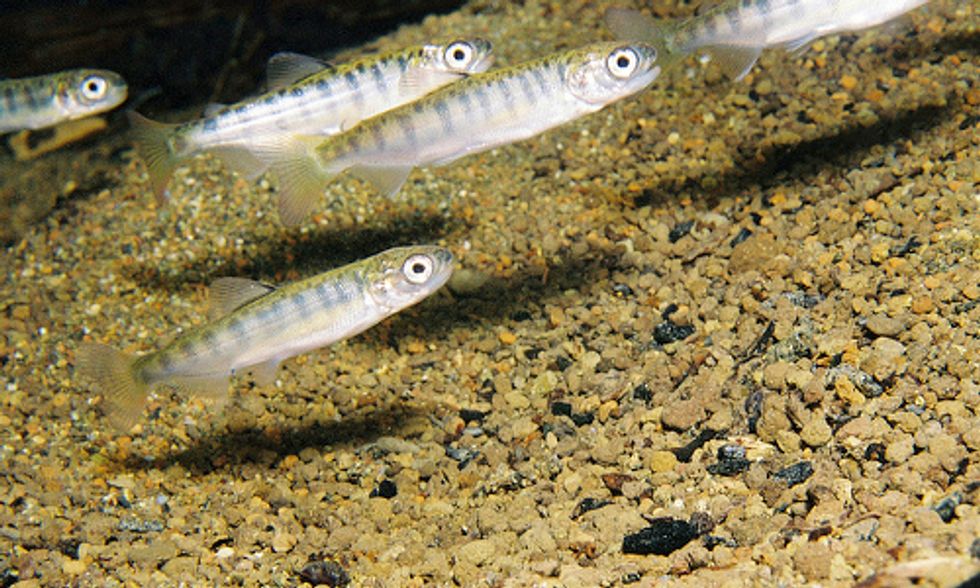 Every year between late March and early June, roughly 30 million Chinook salmon make their way from five Central Valley hatcheries to the Pacific Ocean. This year, however, these young salmon—called smolts—face a perilous journey due to California’s enduring drought.

Drought conditions in California mean that there isn’t much rainfall or snowmelt to convey young salmon to the ocean. Photo credit: Roger Tabor/ USFWS

In order to ensure that the Chinook make it all the way to the sea, the California Department of Fish and Wildlife (CDFW) and the U.S.Fish and Wildlife Service (USFWS) have adopted a drought contingency plan to transport salmon smolts closer to the Pacific Ocean in tanker trucks. Trucking operations began yesterday.

“If you are a baby salmon, the name of the game is to get from the river where you were born to the ocean,” explains John McManus, executive director of the Golden Gate Salmon Association, an organization that aims to protect and restore California’s Central Valley salmon habitat. “Well, these fish are not great swimmers when they are four inches long, so the way they have evolved in nature is they get flushed out to the ocean. How do they get flushed? They get flushed from the rainfall or the snow melt.”

Unfortunately, drought conditions in California mean that there isn’t much rainfall or snowmelt to convey young salmon to the ocean. The drought also means less sedimentation in the rivers. Salmon rely on the murky water caused by sedimentation for camouflage and protection, and are left vulnerable to predation by larger fish and birds in clear water. According to McManus, these factors combine to create extremely hostile conditions in the river.

CDFW and USFWS, which, combined, run five hatcheries for fall-run Chinook, will try to circumvent this hostile environment by loading young salmon into tankers and trucking them several hours downriver. This is not unprecedented for CDFW — the state agency trucks between 8 million and 14 million fish on an average year—but this year CDFW will truck an estimated 18.4 million fish. (The USFWS will truck another 12 million.)

“It has been done before,” says Harry Morse, an information officer with the CDFW. “The state Department of Fish and Wildlife has trucked up to 18 million or more [salmon] several times over the last two decades, but usually only during circumstances that are very severe like this drought.”

The USFWS, which runs the Coleman National Fish Hatchery in Anderson, California, rarely employs trucking to move salmon smolts, generally releasing them from the hatchery to swim downstream to the ocean. The severe drought, however, has forced their hand—the Coleman hatchery is much further upriver than the state-run hatcheries, and hatchery managers are concerned the majority of fish wouldn’t survive the in-river migration.

Trucking 30 million salmon is no small undertaking. According to McManus, a tanker truck can hold anywhere from 100,000 to 140,000 smolts. Assuming that each truck transports an average of 120,000 fish, the effort will require 250 trips. When they arrive at San Pablo Bay, the salmon will be released into nets where they will spend a few hours recovering from the ride and adjusting to their new surroundings before being released with the outgoing tide.

Though experts agree that trucking is the best option this year, the plan is not without its downsides. Salmon make a “smell map” as they exit the river system. This map imprints in their brain, and allows them to navigate back to their birthplace several years later to spawn. Without making the down-river migration as smolts, salmon never have a chance to develop this map and may have a harder time finding their way home.

State-run hatcheries are not particularly worried about the loss of smell maps. They have relatively high return rates of salmon that are released in the Bay. The federally operated Coleman hatchery, however, is located higher upriver, which means salmon have farther to swim back to their spawning grounds and more opportunities to “get lost” on the way.

“The big concern is that when you truck them, you interrupt the imprinting cycle … so when they return as adults, they can’t find their way back to Coleman National Fish Hatchery,” says Bob Clarke, fisheries program supervisor at the USFWS.

Other hatchery managers, however, are less concerned. “There has been a history of mixture of stocks for about as long as the hatcheries have been in existence,” says Morse, from the state run hatcheries. “None of these systems since we dammed all of them off are pristine.”

Given the severity of the drought, it seems that Californians will have to accept these risks and accept salmon trucking as the best option. “You are almost guaranteed that you won’t get your fish back if you release them at the hatchery because of the hostile conditions in the river,” says McManus, underscoring this point. “The best shot you have this year is to truck them.”