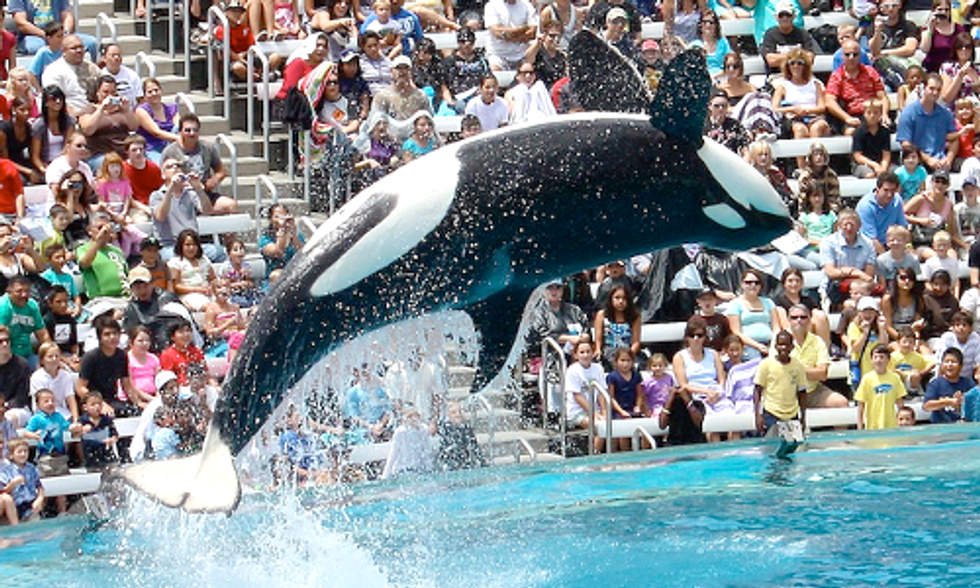 A new bill has just been introduced in California that would phase out orca captivity in the state. Assembly Bill 2140, introduced by assembly member Richard Bloom last week, seeks a ban on keeping killer whales in captivity for human entertainment and retire all captive orcas to sea pens.

An orca performs a flip during a "Shamu—Believe" show at Seaworld, San Diego. Despite growing evidence, Sea World rejects claims that forcing killer whales to perform is dangerous to both orcas and trainers. Photo credit:
Jesse Means/ Flickr

While the proposed legislation, dubbed the Orca Welfare and Safety Act, doesn’t specifically name SeaWorld, the marine park’s San Diego facility is the only one in the state that currently has 10 captive orcas that are used in performances. The company has, unsurprisingly, reacted harshly to the proposal.

The draft bill is quite comprehensive and would:

These provisions would not apply to any orca held for rehabilitation or stranding, or for research purposes. However, any orcas held for rehabilitation or research would have to be released eventually or kept in a sea pen. Similarly, orcas held for entertainment purposes would be retired to a sea pen and released if possible. Until an appropriate sea pen is available for retirement, orcas could be held for exhibition only in existing tanks.

“There is no justification for the continued captive display of orcas for entertainment purposes," said Bloom (D-Santa Monic) said in a statement. “These beautiful creatures are much too large and far too intelligent to be confined in small, concrete tanks for their entire lives.”

Bloom was accompanied by Blackfish director Gabriella Cowperthwaite and two former orca trainers at a press conference announcing the bill at the Santa Monica pier on Friday. The lawmaker said the harrowing documentary, that reveals the dangers to orcas and their trainers at SeaWorld, was what inspired him to take action.

SeaWorld objected strenuously to the proposed legislation, attacking the messenger: according to a CNN report, SeaWorld spokesperson Becca Bides claimed that the participants joining Bloom were well-known "extreme animal rights activists, many of whom regularly campaign against SeaWorld and other accredited marine mammal parks and institutions."

As this Wired article notes: “Bloom’s proposed law isn’t the first of its kind: South Carolina banned the public display of dolphins in 1992, as did Maui County, HI, in 2002. In February of this year, New York state senator Greg Ball introduced a bill that would ban orca confinement in sea parks and aquariums.” Clearly, public awareness about this issue is growing.

Earth Island’s International Marine Mammal Project has endorsed the legislation and will work to see it passed by the California legislature. It should prove to be an interesting fight over the ethics of keeping intelligent orcas in captivity.

If you live in California, you can contact your own assemblymember and state senator, urging them to support the Orca Welfare and Safety Act. They can sign on as co-sponsors, and of course can vote in favor of the bill when it comes to them. Find your legislator here.

You can also contact Assemblymember Richard Bloom and express your support: