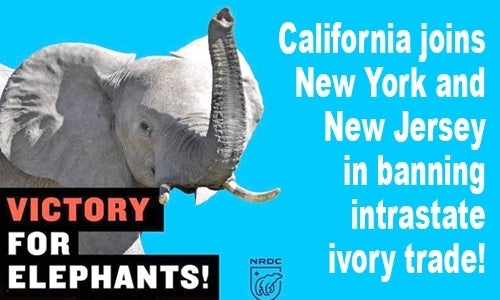 With a quick stroke of his pen, California’s Gov. Brown signed into law yesterday AB 96, thus eliminating the third largest ivory market in the country and joining New York and New Jersey in banning intrastate ivory trade. The bill passed the State Senate by a vote of 26-14 and the State Assembly by a vote of 62-14 earlier this month.

According to an NRDC-commissioned undercover investigation of California’s ivory markets, up to 90 percent of the ivory for sale in Los Angeles and approximately 80 percent of the ivory for sale in San Francisco is likely illegal under California law, meaning that it was harvested relatively recently and thus could be linked to the elephant poaching crisis now gripping Africa. The report also found that the proportion of likely illegal ivory in California has roughly doubled—from approximately 25 percent in 2006 to about 50 percent in 2014.

Fortunately, AB96—which is named for the number of elephants killed every day in Africa—will put an end to this. The bill, which was introduced by California State Assembly Speaker Toni Atkins and California State Sen. Ricardo Lara, will crack down on California’s ivory market and, in turn, the demand for ivory that is fueling poaching. It will also serve as a role model for China—the world’s top ivory-consuming country—which recently announced plans to phase out its domestic ivory market to combat elephant poaching.

The NRA is opposing a stronger ban on elephant ivory sales in California http://t.co/vQjNbSoyD9 pic.twitter.com/bk9Sy7A3HH

Current California law allows the purchase and sale of ivory imported prior to 1977, which has created a parallel illegal market and made the law nearly impossible to enforce. AB 96 fixes this by eliminating the pre-1977 loophole in California’s ivory law and banning the sale, offer for sale, possession with intent to sell and importation with intent to sell of elephant, mammoth, narwhal, whale, walrus and hippo ivory, along with rhinoceros horn. It also increases penalties for traffickers to up to roughly $50,000 and/or one year in prison. The bill contains limited exceptions for antique musical instruments that have proper documentation showing they’re old and antique objects comprised of less than 5 percent ivory, as the vast majority of the illegal ivory trade involves objects made entirely or almost entirely of ivory. Scientific and educational institutions will also continue to be able to buy and sell ivory with certain restrictions.

AB 96 will become effective July 1, 2016. After that, hopefully we’ll be able to walk around places like San Francisco’s Wharf and Chinatown without the gruesome sight of carved ivory tusks in the store windows. In the meantime, we’ll be assessing opportunities for similar legislation in other states. On the federal level, we’ll also be encouraging the U.S. Fish and Wildlife to strengthen its proposed rule on the interstate ivory trade and ensuring that it doesn’t bend to the wishes of the National Rifle Association and weaken these planned regulations.

Greenpeace: The Truth Behind the World’s Largest Tuna Company