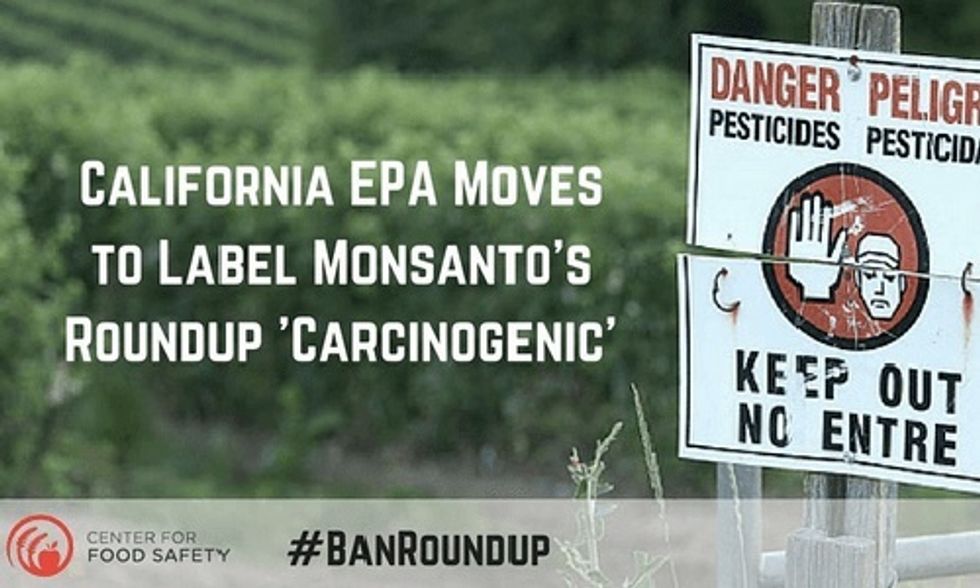 In a first for the country, California's Environmental Protection Agency (Cal/EPA) has issued plans to list glyphosate—the toxic active ingredient in Monsanto’s Roundup herbicide—as known to cause cancer.

According to a "notice of intent" issued last week by the Cal/EPA's California's Office of Environmental Health Hazard Assessment (OEHHA), the effort falls under California's Proposition 65, in which the state is required to publish a list of chemicals known to cause cancer or birth defects or other reproductive harm.

The same law, otherwise known as the Safe Drinking Water and Toxic Enforcement Act of 1986, also requires that certain substances identified by the International Agency for Research on Cancer (IARC)—the World Health Organization's cancer arm—be listed as known to cause cancer.

The state agency's Sept. 4 announcement follows a classification of glyphosate by the IARC as "probably carcinogenic to humans" in March.

“Case-control studies of occupational exposure in the USA, Canada, and Sweden reported increased risks for non-Hodgkin lymphoma that persisted after adjustment for other pesticides,” the IARC said about the herbicide. There is also “convincing evidence” that it can cause cancer in laboratory animals.

It appears that California is the first state in the country to make this assessment about the controversial chemical, according to Dr. Nathan Donley, a scientist at the Center for Biological Diversity.

"As far as I'm aware, this is the first regulatory agency in the U.S. to determine that glyphosate is a carcinogen," he explained in an email to EcoWatch. "So this is a very big deal."

Roundup, Monsanto's flagship herbicide, is sprayed on crops all over the world and is the most popular weed-killer in the U.S. The agribusiness giant maintains the safety of their product and has demanded the WHO retract their report.

A day before California's EPA made the announcement, Monsanto also tweeted this link:

Do you have questions about glyphosate? We’re answering the most common questions here: http://t.co/liwzBzdwCm pic.twitter.com/qLof0WxVfs — Monsanto Company (@MonsantoCo) September 3, 2015

Despite the company's claims, many years of scientific research have linked Roundup to a slew of health and environmental problems, as well as the record decline of monarch butterflies. In June, France banned the sale of Roundup in garden centers amid concerns of toxicity.

It's unclear if states will follow in California's footsteps, but the Golden State specifically has the legislative edge on labeling laws.

Besides glyphosate, three other chemicals—tetrachlorvinphos, parathion and malathion—were also listed as cancer-causing by the Cal/EPA. The agency's notice of intent aims to add these chemicals within 30 days to the approximately 800 chemicals that are known to cause cancer, RT reports.

Sam Delson, a spokesman for the OEHHA, told Agri-Pulse that businesses with 10 or more employees that use chemicals on this list must provide a “clear and reasonable warning” of the product's potential dangers.

The listing does not restrict use or sales of the specified substances, and the public is allowed to submit comments regarding the proposal through Oct. 5.

Monsanto spokesperson Charla Lord told Agri-Pulse that "glyphosate is an effective and valuable tool for farmers and other users, including many in the State of California. During the upcoming comment period, we will provide detailed scientific information to OEHHA about the safety of glyphosate and work to ensure that any potential listing will not affect glyphosate use or sales in California."

Consumer advocates have approved of the move from the Cal/EPA.

“Since The World Health Organization's research arm recently declared glyphosate is probably carcinogenic to humans, listing it under Prop 65 and requiring it to be labeled as such is a logical next step,” Rebecca Spector, west coast director at Center for Food Safety, told EcoWatch.

Environmental activist Erin Brokovich also wrote in a Facebook post last week, "Monsanto had a bad day yesterday ... It's finally the beginning of the end."