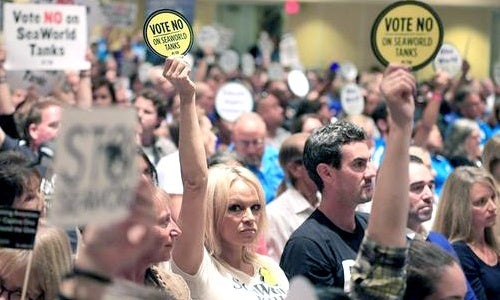 The California Coastal Commission has approved a $100 million plan to to double the size of SeaWorld San Diego’s orca tanks but there was one major condition: No more captive breeding.

According to the Associated Press, the “last-minute amendment would ban breeding of captive orcas, including through artificial insemination, at the California park but not at SeaWorld facilities in other states.”

Sale, trade or transfer of captive orcas has also been prohibited. “The amendment does provide a potential exemption for certain whales caught in the wild but it wasn’t immediately clear whether that applied to any of the orcas at the San Diego park,” the AP added in its report.

The new tank, which is part of SeaWorld’s planned Blue World Project meant for orca research and education and set to open in 2018, will have a surface area of 1.5 acres and a depth of 50 feet.

However, Ingrid Visser, head of the Orca Research Trust in New Zealand, pointed out to the Los Angeles Times that whales in the wild swim an average distance of 138 miles per day and dive to depths of about 600 feet.

“These new tanks do not meet these basic requirements,” she said. “No facility ever will.”

SeaWorld said it was disappointed by the conditions set by commission, which oversees construction projects along California’s coast.

“A ban on breeding would sentence these animals to a slow extinction in our care,” John Reilly, president of SeaWorld San Diego, told the Los Angeles Times.

The ocean park also said in a statement, “We are disappointed with the conditions that the California Coastal Commission placed on their approval of the Blue World Project and will carefully review and consider our options. Breeding is a natural, fundamental and important part of an animal’s life, and depriving a social animal of the right to reproduce is inhumane.”

According to the AP, the decision has raised questions of whether SeaWorld will continue with the project or legally challenge the decision.

The embattled theme park has been facing continued public criticism and slumping in ticket sales since the airing of the 2013 documentary Blackfish, which exposed the cruel treatment of SeaWorld’s captive orcas.

The vote from the California agency was declared a victory for animal rights activists as it ultimately bans any future breeding of the whales.

Former #SeaWorld trainer ft. in #Blackfish, Dean Gomersall, is one of the 100s here asking commissioners to #VoteNo. pic.twitter.com/NGVsVHkSH8

“SeaWorld has admitted that it intended to breed even more orcas to fill the new tanks, but the commission’s action today ensures that no more orcas will be condemned to a nonlife of loneliness, deprivation and misery,” People for the Ethical Treatment of Animals (PETA) said in a statement.

“These 11 orcas would be the last 11 orcas there,” PETA lawyer Jared Goodman told the AP.

The prominent animal rights group said it had sent 120,000 e-mails and letters urging the commission to vote against captive breeding.

Hundreds of protesters, including actress and noted PETA spokeswoman Pamela Anderson, showed up at the Long Beach Convention & Entertainment Center where an all-day, and at times emotional, meeting on the issue was held.

Several people in attendance provided testimony to the state panel.

“Captivity is still captivity no matter how gentle the jailer,” said former SeaWorld trainer John Hargrove, who also appeared in Blackfish, according to the Los Angeles Times.

SeaWorld staff countered that a larger enclosure would improve the livelihoods of the orcas and would also help visitors appreciate the orcas.

“We care for these animals as if they were our family,” said Hendrik Nollens, the head veterinarian at SeaWorld.