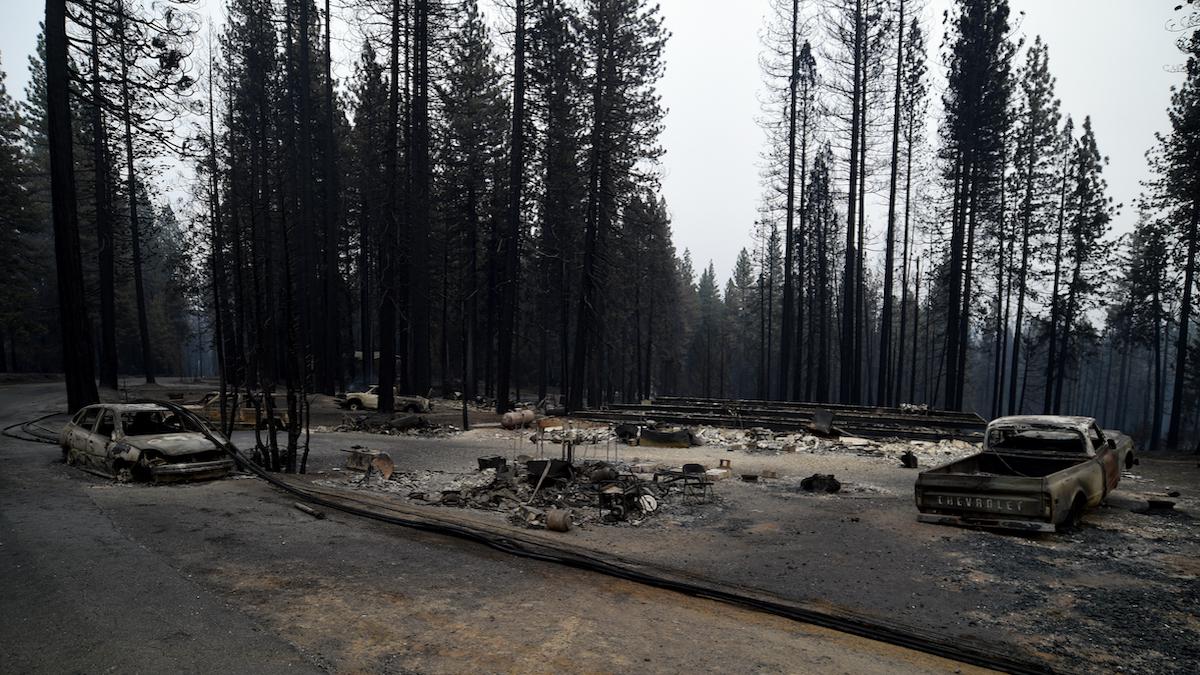 The Caldor Fire ripped through the community of Grizzly Flats in the El Dorado National Forest in California on Aug. 20, 2021. Neal Waters / Anadolu Agency via Getty Images

As Paradise, California works to buy up properties devastated by the 2018 Camp Fire to create a more fire-resilient barrier for the still-rebuilding town, Northern California is under a siege of wildfire and smoke.

Nearly 43,000 Californians are under evacuation orders as more than 13,500 firefighters battle a dozen large wildfires across the state. The most urgent, officials said Monday, was the Caldor Fire which blew through the 100,000-acre mark over the weekend, burning more than 30,000 acres in two days — a rate of just under eight football fields every minute — and was “knocking on the door of the Lake Tahoe basin,” Cal Fire Director Thom Porter told reporters Monday.

As reported by the Mercury News:

The fire, which has destroyed more than 550 buildings in El Dorado County, had ignited 114,166 acres by Monday night as officials continued to sound alarms. The blaze has such destructive potential that it has jumped to the front of the line when it comes to allocating personnel, fire trucks, aircraft and other tools from around the country, Cal Fire Chief Thom Porter said during a briefing Monday.

“It is that important,” he said. “It is knocking on the door to the Lake Tahoe basin. We have all efforts in place to keep it out of the basin, but we do also need to be aware that that is a possibility based on the way the fires have been burning.”

The fire has already incinerated more than 500 buildings of the nearly 2,000 buildings destroyed statewide this year. Just 9% contained, the Caldor Fire threatened more than 17,000 structures as of Monday evening and smoke from its flames made Lake Tahoe’s air quality the worst in the nation.

The megadrought across the American West, made worse by human-caused climate change, is not only supercharging wildfires in California, but hampering efforts to contain them as well.

“The entire western United States is having fire problems right now,” Diana Swart, a spokesperson for the Amador El Dorado unit of Cal Fire, told The Guardian. “When we can we will get resources from out of state, but they are also working their fires as well.”