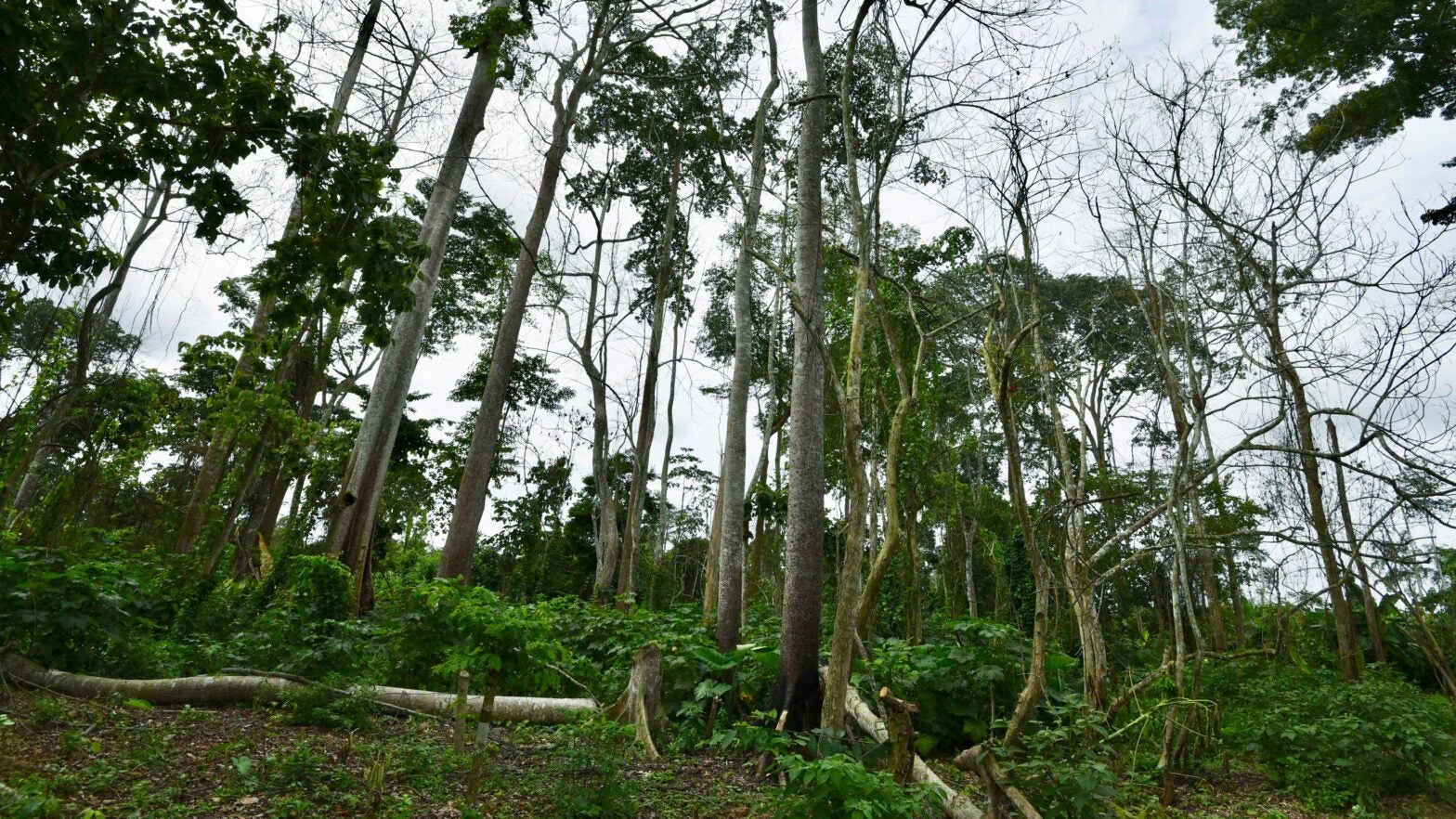 View of an Ivorian cleared forest at the edge of the 35.000 hectares Peko Mont National Park on Oct. 8, 2016. The Mont Péko National Park is located in the west of Ivory Coast where the forest officers fight with illegal immigrants to protect an exceptional flora and fauna, espacially dwarf elephants. SIA KAMBOU / AFP / Getty Images

Ivory Coast’s rainforests have been decimated by cocoa production and what is left is put in peril by a new law that will remove legal protections for thousands of square miles of forests, according to The Guardian.

The new law hands unprecedented power over to the chocolate industry in a country that is the world’s largest chocolate producer. A broad range of advocacy groups for workers and for the environment have warned that the new forestry codes, which the country’s National Assembly recently ratified, will usher in a new wave of unsustainable cocoa production and allow for massive deforestation in forests that are already degraded with deforestation levels over 75 percent, as The Guardian reported.

The law reclassifies 7,700 square miles of protected forest as “agro-forest” and hands control of the forests over to international companies.

“We are opposed to further deforestation of these areas,” said Youssouf Doumbia, president of the Ivorian Observatory for the Sustainable Management of Natural Resources, a civil society organization consulted on the proposals, as The Guardian reported. “Politicians have authorized the construction of infrastructure in these agro-forests – but if we do that, it’s an open door for the pure and simple disappearance of our forests. They will be wiped out.”

Cocoa farming in West Africa, which produces over 60 percent of the world’s chocolate supply is known for its unsustainable slash and burn practices. That is where forest is cut down and burned before planting, and then, when the plot was no longer fertile, the farmer moved to fresh forest and repeated the process, according to Michael E Odijie, a researcher at the University of Cambridge, who wrote a recent essay on the plight of West African cocoa farmers for Quartz.

So much forest has been cut down over the last 60 years that there is barely enough left for slash-and-burn. Since 1960, forests in Ivory Coast has decreased from 16 million hectares, roughly half the country, to less than 2 million by 2005, according to Odijie’s essay.

The new law, which allows for 24-year land leases, will lead to a loss in property rights for Indigenous communities and create a monopoly for foreign companies.

“There’s a risk of a massive land grab situation,” said Julia Christian, forest campaigner at Fern, a Brussels-based organization working with cocoa growers, as The Guardian reported. “They’re lands currently run by independent, small-scale farmers – but it’s going to become a monopoly with companies given exclusive rights to buy cacao.”

The rampant deforestation that has occurred since 1960 to meet the world’s demand for chocolate has pushed native animals like chimpanzees and forest elephants to the brink of extinction.

The Guardian reported that a Global Forest Watch report showed that Ivory Coast had the second highest increase in deforestation rates in the world. Unrestricted deforestation means the Cavally Forest will disappear entirely by 2061 and the Goin Debe Forest by 2071, according to a report by Mighty Earth. The Mighty Earth investigation found that Ivorian cocoa has depended on protected areas. Since 2000, cocoa planting claimed half of Mont Péko National Park.

In addition to trampling over the forests, the West African cocoa-industry has a horrible record of human rights’ abuses. There are more than 2 million children working on West African cocoa plantations and trafficking and slavery are rampant, according to The Guardian.

Farmers often earn less than one dollar per day while working in oppressive heat. They earn 6 percent of a chocolate bar’s sale price compared to 80 percent for the manufacturers and retailer, according to Fern, as The Guardian reported.

Cocoa: why the European Union must act now to eliminate deforestation and child labour from the chocolate we love https://t.co/6Sv9gUprvP

If you love chocolate, but don’t want to support deforestation or human rights abuses, there is sustainable chocolate in the marketplace. So, before stocking up on Halloween candy, you might want to look at the Green America Chocolate Scorecard, which ranks major chocolate companies on their sustainability practices and human rights efforts in cocoa supply chains.

Spoiler alert courtesy of the trade publication Material, Handling & Logistics: the three lowest graded companies were Godiva (F) and Ferrero and Mondelez (both Ds). They ranked worse than Lindt, Hershey (both C), Mars and Nestle (C+).