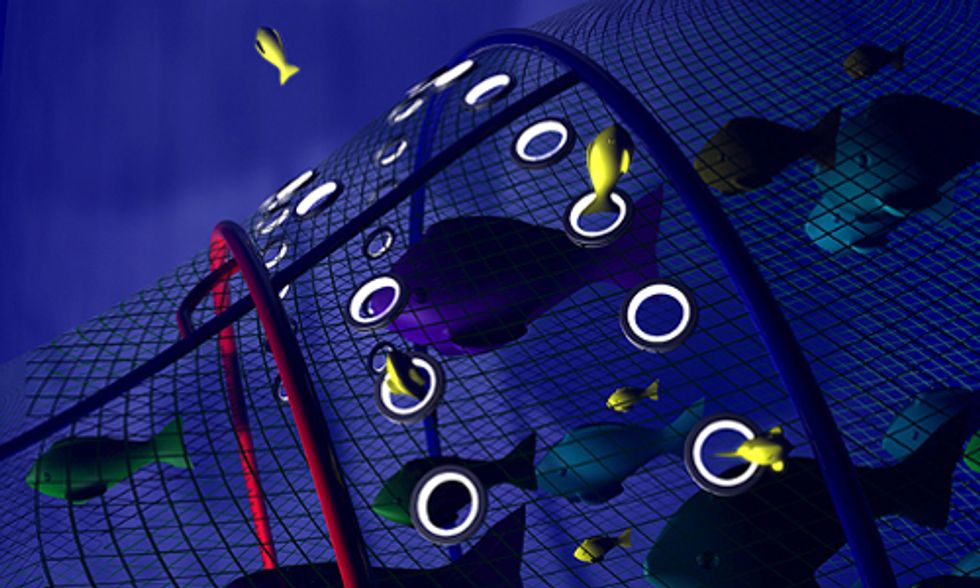 Six years ago, the Norwegian coast guard filmed a Scottish fishing vessel riding gray swells, dumping 5 metric tons of dead fish back into the North Sea. Over the European Union catch quota, and so unable to keep all the fish they’d caught, the fishermen had to ditch some. To the Norwegians, who aren’t part of the EU and hold a strict discards ban, the waste was shocking.

When this news reached Dan Watson, a young British designer, it became the inspiration for SafetyNet, an ocean fishing net that allows certain fish to escape via lighted rings, offering more catch selectivity. The Scottish fishermen’s predicament, he believed, was driven by their lack of control. “There can be no villains, there can be no victims, there are just problems,” Watson says. “I started this project because I wanted to go some way towards solving that problem.”

Watson joins a growing number of innovators designing more selective fishing gear to reduce bycatch—the unwanted fish, dolphins, whales and birds that get scooped up by longlines, gillnets and trawlers each year and then discarded. Globally, the amount of marine life that is wasted or unmanaged—which makes it potentially unsustainable—forms about 40 percent of the catch. “The way we catch now is to catch everything, decide what we want to keep, and discard the rest,” says Martin Hall, head of the bycatch program at the Inter-American Tropical Tuna Commission, which regulates tuna fishing in the eastern Pacific Ocean. Bycatch can result in overfishing, reduces the population of species that might already be endangered and, on the largest scale, interrupts food chains and damages whole ecosystems. It also amounts to an enormous waste of valuable fish protein.

To designers building better nets and lines, bycatch isn’t viewed as an inevitability, but as something we can phase out, piece by piece. It’s also seen as a battle that needs to be fought alongside fishermen, not against them.

Speaking from his trawler, the 45-foot Proud Mary, off the coast of Massachusetts, one such fisherman, Christopher Brown, says that over the years, fishermen have had to “rethink the game.” Brown operates a fishery that’s almost completely free of discards; is the board president of the Seafood Harvesters of America, an organization representing stewardship-minded fishermen; and has designed a squid net that reduces bycatch. The net contains an escape route at its base that exploits the bottom-dwelling behavior of unwanted flounder, encouraging them to flee the net through this gap. “We need to look at things entirely differently than we have in the last 30 years,” Brown says—and new gear is part of that equation. “It’s a matter of enlightened self-interest.”

Brown may seem unconventional, but more and more, fishermen are the ones both driving change and being consulted like clients about new gear. “The main focus has to be the fisherman,” says Watson. “You have to build something the fisherman is going to use.”

For designers, the next challenge is gaining capital. Although Watson has been working on his SafetyNet design for five years, and even though it won the prestigious James Dyson design award in 2012, it’s still staggeringly expensive, and Watson has had difficulty hiring a boat that will try out his net on open water.

Designed to free both young and endangered fish, the SafetyNet works by using fitted LED rings, which flash like exit signs to alert smaller fish. The fish can then escape by squeezing through the rings. There’s also a panel in the net that separates tighter mesh at the top from larger mesh below, allowing nontarget, bottom-dwelling species such as cod to escape through the bigger holes. With lights and panel working in tandem, “You can start almost herding the fish under the water,” Watson says.

There is no silver-bullet solution for a problem as broad as bycatch; instead, each new piece of gear responds uniquely to a species’ size, shape and behavior. “The more we know about the ways we can stop different things being caught, the more we can make bespoke nets,” Watson says. As Hall puts it, “Slowly, you attack the different angles of the problem, and you solve it.”

Of course, there’s the inevitable economic caveat. Just as Watson has fought for funding, money is an obstacle for the industry too, slowing the scale-up of new gear across fisheries. Fishermen support innovation, but they can’t be expected to lose money over it, says Barrie Deas, chief executive for the National Federation of Fishermen’s Organisations, which represents fishermen in the UK. “Technical innovation is one thing. It’s the economic consequences of doing that [that matters],” he says. “People will seek economic ways to fish.”

It’s easy to argue back that changes in gear should just be legislated—but that rarely works, says Deas, if fishermen aren’t already onboard. “It’s not so much the designed gear that’s the problem,” he says. “But if the attempt is made to introduce it in a top-down bureaucratic way with top-down prescriptive legislation, the last 20 years has told us that doesn’t work.”

Going some way to bridge this financial gap and to bring collaborative, bottom-up thinking to gear design, the World Wildlife Fund (WWF) runs a regular competition called the International Smart Gear Competition that gives academics, conservationists and fishermen the chance to share their ideas.

“What we have learned is that you need an incentive to get started,” says Hall, who doubles as a competition judge. And that incentive is cash. For each competition cycle, sponsors partner with WWF to generate the prize money. This year, $65,000 will be awarded—the grand prize will be $30,000, with runners-up receiving the rest. “The extent of the support depends on the amount of money we can raise, so in some years, it’s been better than others,” says Michael Osmond, Smart Gear’s senior project officer.

The prize money goes to notable designers to help them build, try out and, they hope, introduce their gear into fisheries. “I think that attitudes have changed a lot over the last decade,” Osmond says. “With our competition, a lot of the winning ideas have come from fishermen themselves.”

This collaborative environment has delivered some serious successes. In 2011, designers hacked LED fishing lights ordinarily used to attract fish and repurposed them to drive turtles away instead. Globally, dense pockets of gillnets unintentionally snare and drown thousands of turtles each year because they’re almost invisible underwater, says John Wang, project leader and a researcher with the Joint Institute for Marine and Atmospheric Research who works as a fisheries research ecologist at the National Oceanic and Atmospheric Administration. But if LED lights are fixed onto nets and tuned to a wavelength turtles can see, turtles recognize the nets as barriers and cruise by. As Wang puts it, “We have a selective communication channel to the turtles.” With this tool, they’ve reduced bycatch by up to 60 percent during trials in Mexico, Peru and Indonesia, and are now working with U.S. fisheries too.

It’s not just about turtles, though: “What we’re beginning to see is that the wavelength has some interesting properties. Different wavelengths affect fish in different ways,” Wang says. Now, he’s working on illuminating nets with ultraviolet light to steer hammerhead sharks away.

The brainchild of fishermen, designers and academics—“a real collaborative effort,” says Laura Skrobe, Eliminator team member and fisheries scientist at Rhode Island University—the net frees down-swimming cod through the large mesh at the base, reducing bycatch by 80 percent. A tighter mesh at the top herds in haddock, which tend to swim upward. The net also significantly cuts dogfish, plaice and lobster catch—all without hurting the haddock fishery.

During trials, the team had to sell the catch from the first three trawls just to afford the fourth. But despite hurdles, “the fishermen were really the ones who pushed it,” says Skrobe. “Our fishermen will be conservationists themselves whether or not their managers tell them to. We’re just providing tools for the toolbox.” The net’s straightforward design has made it useful in both the U.S. and the U.K., where it’s now formally part of fishing regulations.

Out of the Box

In the quest to scale up smart fishing gear across global fisheries, Hall echoes what designers such as Skrobe feel: large-scale, regulatory change can happen, but only if it’s negotiated with fishermen first, or they’ll resent it. Increased investment is the obvious next step, to spur innovation and to make gear changes easier to phase into fisheries so fishermen don’t carry the costs.

As a longtime WWF Smart Gear judge, Hall adds something else: He craves even greater innovation, ideas that challenge the age-old fishing tradition. “Even though wonderful things are happening, we aren’t innovating in a dramatic way,” Hall says. “I’d really like to see an initiative that goes out of the box, to just shake the concept that because we’ve been doing this for 2,000 years, it’s OK.”

In August, Dan Watson will try his SafetyNet on the open ocean for the first time. After weathering a few challenges, he’s found a trawler that will take him off the southwestern coast of the U.K. and into the Atlantic, pulling his lighted net, to ride the swells just as those Scottish fishermen did six years ago.

For those fighting bycatch, there’s a long road ahead—much of it determined by funding and policy. But for now, innovators need to keep innovating, Watson believes. “You can look at the political world of fish, but that’s going to take 20 years to sort out. We need to create interventions in the meantime.”