Buzzing Artist Swarms City Walls to Save the Bees 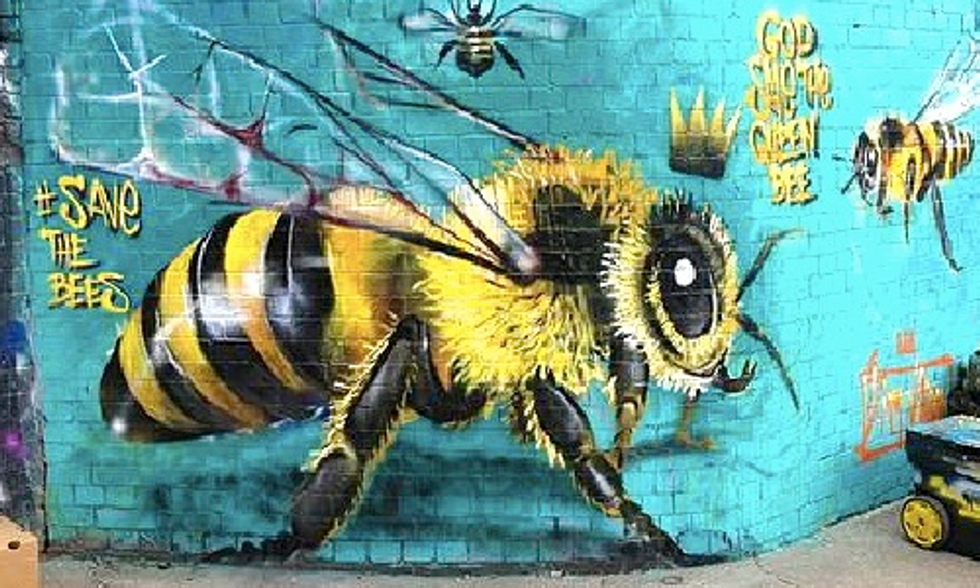 With a little help from a spray can, a London-based street artist is swarming urban walls with a simple but important message: Save the bees.

According to the artist's website, Louis Masai Michel and his collaborator Jim Vision have painted these beautiful bee murals to raise awareness about the planet's dwindling bee population and the "detrimental effects upon the human race if they disappear."

Protecting the planet's fragile bee population is not only important for saving honey and wax, honey bees—wild and domestic—perform about 80 percent of all pollination worldwide. In fact, seventy out of the top 100 human food crops, which supply about 90 percent of the world’s nutrition, are pollinated by bees. However, our favorite black-and-yellow pollinators are dying off due to pesticides, drought, habitat loss, pollution and other major environmental concerns, scientists have said.

Insights writer Dr. David Suzuki wrote that neonicotinoid pesticides, or "neonics," have been identified as one of the main culprits to the die-offs. While scientists say the evidence is clear, the global food market has been slow to wake up to this reality. As Suzuki pointed out, "Neonics make up about 40 percent of the world insecticide market, with global sales of $2.63 billion in 2011—and growing. That may explain why, despite increasing evidence that they’re harmful, there’s been such strong resistance to phasing them out or banning them."

A report from the U.S. National Agriculture Statistics found that the honey bee population in the country has declined from about six million hives in 1947 to 2.4 million hives in 2008, a 60 percent reduction.

Looks like being a bee isn't so easy. Some of Michel's artworks appears to show what life may be like for the buzzing insects. Check out the murals below with the haunting words, "When we go, we're taking you all with us" on a wall in Shoreditch.

This mural was done on a wall in London's East End. Photo credit: Louis Masai Michel

There's also this grim closeup of an overturned bee with a sign that says "Save me" on Brick Lane's Sclater Street in England.

A report from the U.S. National Agriculture Statistics found that the honey bee population in the country has declined from about six million hives in 1947 to 2.4 million hives in 2008, a 60 percent reduction. Photo credit: Louis Masai Michel

According to Colossal, after the murals became wildly popular in the English capital, they have since spread to Bristol, Glastonbury, Croatia, New York, Miami and New Orleans. You can track the artist's work with the Twitter hashtag #SaveTheBees. Below, you'll see a commissioned mural at a quince farm in Devon, England.

The inspiration behind the murals stemmed from a trip to South Africa where Michel learned about the devastating impacts of colony collapse disorder that's plaguing honeybee populations around the world. Colossal writes that Michel is currently taking a break from the bee murals to work on a different art project, but he plans to pick up phase two the bee project sometime next year.

Ever the artist-conservationist, Michel also creates art to raise awareness for other rare or endangered animals species around the world, such as the grey African crowned crane,  Rothschild's giraffes, rhinos and more.

Michel realizes there is only so much that art can do, but points out the importance of raising awareness. "I'm not saying that by me painting a painting it's going to save any animals," he says in the video below (where he's spray-painting a picture of a Scottish bobcat at an art party). "But it might mean that people are a little but more woken. They're like, 'Oh, okay, there's only 400 bobcats left in the world. That's pretty interesting.' And then maybe they might look into it a little bit."