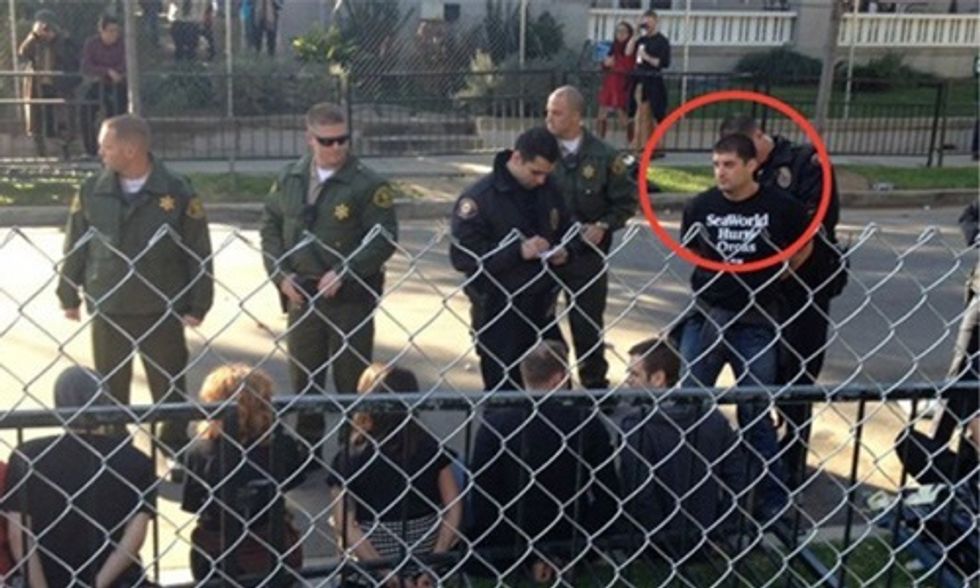 A SeaWorld employee posed for three years as an animal rights activist, in an apparent attempt to undermine protests against the company over its use of captive killer whales, according to an investigation by People for the Ethical Treatment of Animals (PETA).

This photo shows McComb being arrested at a 2014 SeaWorld protest. According to PETA, he was released without charges, and his name never even appeared on arrest sheets. Photo credit: PETA

McComb, who Bloomberg reports has worked in a number of positions at SeaWorld since at least 2008, including as a human resources representative, attended organizational meetings and "constantly 'fished' for information from PETA staffers about protests against SeaWorld," PETA claims.

SeaWorld, which owns 11 theme parks in the U.S., has experienced a public-relations backlash since the release of the Blackfish documentary in 2013, which delved into problems within the sea-park industry.

According to PETA, McComb joined a protest of SeaWorld’s float in the 2014 Rose Parade.

"But, while he was arrested and taken to jail with the other protesters who sat down in front of the float, he suddenly vanished when the other protesters were booked and later released on bail. 'Jones' was inexplicably released without charges, and his name never even appeared on arrest sheets," the investigation found.

"But most insidiously, he has repeatedly tried to incite people who object to SeaWorld to act illegally," the animal rights group reports. "He even organized his own 'direct action' protest—one advertised as 'more exciting than just holding signs'—only to be absent on the day of the demonstration. All of this leaves no doubt that SeaWorld is a dirty tricks corporation, devoid of ethics."

Or perhaps one that is running scared.

Citing research by Heidi Boghosian, executive director of the National Lawyers Guild and author of Spying on Democracy, Kevin Gosztola writes at FireDogLake: "Increasingly, corporations are relying on surveillance of individuals and infiltration of groups to undermine and suppress activism," spurred by fear of how "boycotts or educational campaigns...might expose their practices and impact their earnings."

Indeed, this March, SeaWorld Entertainment, Inc. launched a new advertising campaign "highlighting the company's leadership in the care of killer whales," according to a press statement that indicated the effort came in direct response to animal-rights activism. "In the past two years, PETA has issued more than 110 press releases about SeaWorld, filled with inaccuracies about the company's animal care," the statement said.

And in its response to this week's allegations, the company provided a link to a PETA job posting for an undercover investigator.

"PETA itself actively recruits animal rights activists to gain employment at companies like SeaWorld, as this job posting demonstrates," said spokesman Fred Jacobs, who added: "We are focused on the safety of our team members, guests and animals, and beyond that we do not comment on our security operations. This is a responsibility that we take very seriously, especially as animal rights groups have become increasingly extreme in their rhetoric and tactics."

Plus, Gosztola notes, this "is not the first time that PETA has been targeted by a corporation." Nor will it likely be the last.

"There are very few consequences for this kind of corporate-sponsored espionage activity targeted against activists, especially when it is under the guise of protecting the 'security' or 'safety' of employees," Gosztola warns. "Corporations are able to get away with all sorts of surveillance and information gathering on citizens until they happen to commit an error and are exposed."

Watch Democracy Now!'s coverage from this morning on this issue: