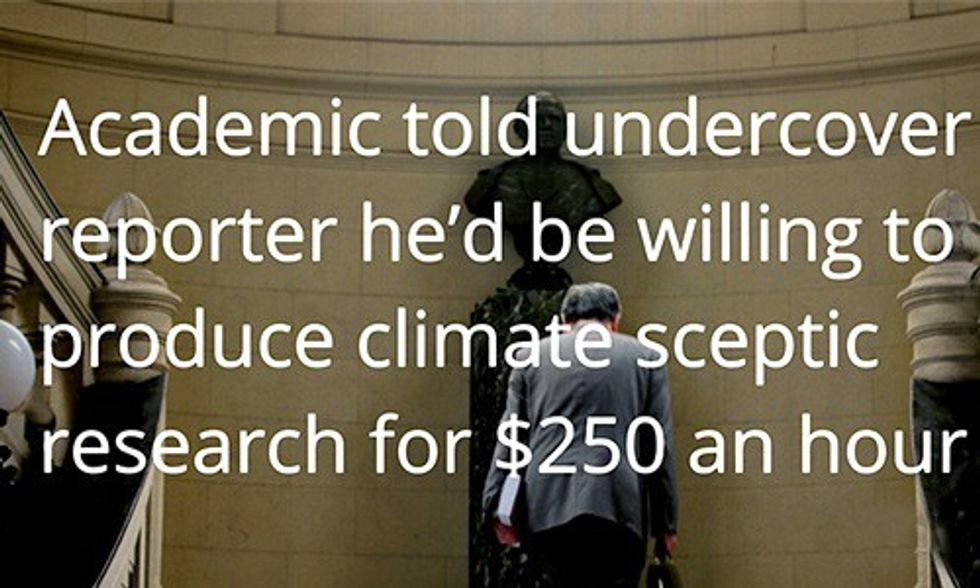 A Greenpeace undercover investigation has exposed how fossil fuel companies can secretly pay academics at leading American universities to write research that sows doubt about climate science and promotes the companies’ commercial interests.

Posing as representatives of oil and coal companies, investigators from Greenpeace UK asked academics from Princeton and Penn State to write papers promoting the benefits of CO2 and the use of coal in developing countries.

The professors agreed to write the reports and said they did not need to disclose the source of the funding.

Citing industry-funded documents—including testimony to state hearings and newspaper articles—Professor Frank Clemente of Penn State said: “In none of these cases is the sponsor identified. All my work is published as an independent scholar.”

The leading climate-skeptic academic, Professor William Happer, agreed to write a report for a Middle Eastern oil company and to allow the firm to keep the source of the funding secret.

Happer is due to appear this afternoon as a star witness in a U.S. Senate hearing called by Republican Presidential candidate Ted Cruz.

In emails to investigators he also revealed Peabody Energy paid thousands of dollars for him to testify at a separate state hearing, with the money going to a climate-skeptic think-tank.

The full story and all the documents have been published here.

The findings echo the case of Willie Soon, a prominent academic exposed in an investigation in the New York Times as having accepted donations from fossil fuel companies and anonymous donors in return for producing climate-skeptic scientific papers.

Professor Frank Clemente, a sociologist from Penn State university, was asked if he could produce a report “to counter damaging research linking coal to premature deaths (in particular the WHO’s figure that 3.7 million people die per year from fossil fuel pollution).” He said that this was within his skill set; that he could be quoted using his university job title and that it would cost around $15,000 for an 8-10 page paper.

Asked whether he would need to declare the source of the money, Professor Clemente said: “There is no requirement to declare source funding in the U.S.” He then shared examples of a testimony and an op-ed, explaining: “Note that in none of these cases is the sponsor identified. All my work is published as an independent scholar.”

Clemente also disclosed that for another report on “the Global Value of Coal” he was paid $50,000 by Peabody Energy—the sponsorship was mentioned in the small print of the paper, but the amount has not been disclosed until now.

The academics’ willingness to conceal the source of funding contrasts strongly with the ethics of journals such as Science, which states in its submission requirements that research “should be accompanied by clear disclosures from all authors of their affiliations, funding sources or financial holdings that might raise questions about possible sources of bias.”

The investigation has also revealed a system by which foreign oil and gas companies can anonymously fund U.S. climate-skeptic scientists and organizations.

When asked to ensure that the commissioning of the report could not be traced back to the Middle East oil and gas company, Professor Happer contacted his fellow CO2 Coalition board member, Bill O’Keefe, a former Exxon lobbyist. He suggested channelling it through the Donors Trust, a controversial organization that has previously been called the “Dark Money ATM” of the US conservative movement.

When investigators asked Peter Lipsett of the Donors Trust, if the trust would accept money from an oil and gas company based in the Middle East, he replied that, although the trust would like the cash to come from a U.S. bank account, “we can take it from a foreign body, just we have to be extra cautious with that.”

Professor Happer, who sits on the GWPF’s Academic Advisory Council, was also asked by undercover investigators if he could put the industry-funded report through the same peer review process as previous GWPF reports claimed to have been “thoroughly peer reviewed.” Happer explained that this process had consisted of members of the Advisory Council and other selected scientists reviewing the work, rather than presenting it to an academic journal.

He added: “I would be glad to ask for a similar review for the first drafts of anything I write for your client. Unless we decide to submit the piece to a regular journal, with all the complications of delay, possibly quixotic editors and reviewers that is the best we can do and I think it would be fine to call it a peer review.”

GWPF’s “peer review” process was used for a recent GWPF report on the benefits of carbon dioxide. According to Dr. Indur Goklany, the author of the report, he was initially encouraged to write it by the journalist Matt Ridley, who is also a GWPF academic advisor. That report was then promoted by Ridley, who claimed in his London Times column that the paper had been "thoroughly peer reviewed."

“This investigation exposes a network of academics-for-hire and a back channel that lets fossil fuel companies secretly influence the climate debate while keeping their fingerprints off. Our research reveals that professors at prestigious universities can be sponsored by foreign fossil fuel companies to write reports that sow doubt about climate change and that those professors will keep that funding secret from the public. The question now is very simple. Down the years, how many scientific reports that sowed public doubt on climate change were actually funded by oil, coal and gas companies? This investigation shows how they do it, now we need to know when and where they did it. It’s time for the skeptics to come clean.”