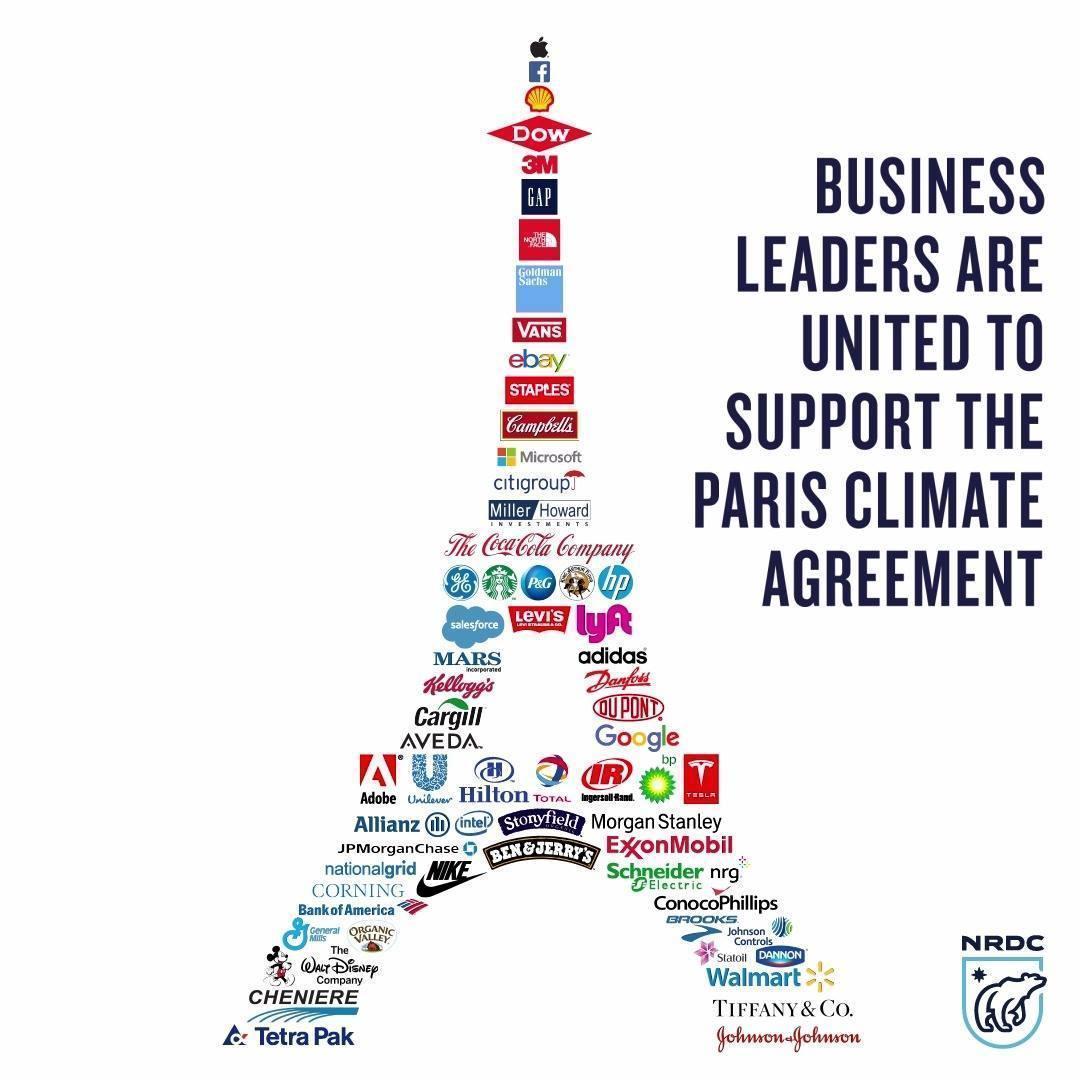 With President Donald Trump reportedly poised to pull out of the Paris climate agreement, right-wing media are encouraging the move by misleading about the accord. They’re claiming that it is a job killer and “anti-Western,” that it would lead to “economic devastation” and that it amounts to an “international regulatory scheme.”

But leaving the Paris agreement would go against the overwhelming will of the U.S. business sector, not to mention the American public and the global community. Many of the most powerful corporations and institutional investors in the U.S. are calling on Trump to stay in the pact, as are some of his fellow Republicans. Dropping out of the global climate accord will satisfy only a handful of coal and mining interests and Trump’s most ideological aides and backers.

Oil and Coal Companies That Support the Paris Agreement

ExxonMobil, the nation’s biggest oil company, is in favor of the Paris agreement. The firm’s CEO, Darren Woods, sent Trump a personal letter urging him to keep the U.S. in the agreement. Woods’ predecessor, Rex Tillerson, now secretary of state, has also argued for remaining in the climate deal.

Other major oil companies that want the U.S. to stay in the agreement include BP, Chevron, ConocoPhillips and Shell. Many oil companies believe a concerted push for climate action will give them the opportunity to sell more natural gas, which emits less carbon dioxide (CO2) than coal when burned to produce electricity (though leaks in natural gas drilling and transport infrastructure can neutralize that climate advantage).

Even one major coal company, Cloud Peak Energy, is asking Trump to stay in the accord. “By remaining in the Paris agreement, albeit with a much different pledge on emissions, you can help shape a more rational international approach to climate policy,” Cloud Peak CEO Colin Marshall wrote Trump in a letter. Marshall argued that remaining in the Paris agreement could encourage support for technologies that reduce and capture CO2 emissions from coal plants. Two other coal companies, Peabody Energy and Arch Coal, have not publicly called for staying in Paris, but they have reportedly told administration officials that they would not object to remaining.

At least 69 Fortune 500 companies have voiced support for the Paris accord.

Twenty-five large U.S. companies, including digital powerhouses Apple, Facebook and Google, recently ran full-page ads in major newspapers urging Trump to remain in the climate accord. “Continued U.S. participation in the agreement benefits U.S. businesses and the U.S. economy in many ways,” they wrote in the ad, including by “strengthening competitiveness,” “creating jobs, markets and growth” and “reducing business risks.”

Separately, more than 1,000 companies, big and small, signed a letter calling for the U.S. to “realize the Paris agreement’s commitment of a global economy that limits global temperature rise to well below 2 degrees Celsius.” Altogether, businesses backing the Paris climate agreement represent more than $3.7 trillion in annual revenues and employ nearly 8.6 million workers, according to Ceres.

Here are some of the Fortune 500 companies that signed onto the ads or letter or have otherwise expressed support for Paris:

More than 280 institutional investors that together manage more than $17 trillion in assets, including Allianz Global Investors, CalPERS and HSBC Global Asset Management, recently signed a letter emphasizing their strong support for the Paris agreement. “The implementation of effective climate policy mechanisms and the regular monitoring of outcomes is vital for investors to make well-informed investment decisions that can also better support governments in delivering their national commitments and priorities,” they wrote.

Republicans Who Support the Paris Agreement

More than a dozen Republicans in Congress support staying in the climate deal.

Rep. Kevin Cramer of North Dakota, who advised Trump on energy issues during the campaign, has been outspoken in calling for the U.S. to remain in the pact. He and eight other Republican representatives sent Trump a letter in April asking him to stay in the agreement but withdraw the country’s emissions-cutting pledge and replace it with a weaker one. “The U.S. should use its seat at the Paris table to defend and promote our commercial interests, including our manufacturing and fossil fuel sectors,” they wrote. “Our engagement must prevent the development of harmful policies which undermine economic growth and energy security here and abroad.”

Other Republicans have voiced support for the Paris deal without calling for rolling back U.S. emissions-cutting goals. “Given the trillions of dollars in cleaner energy investments and countless good-paying American jobs that would result from remaining in the Paris agreement, I again urge President Trump to make sure our country keeps its commitment to lead,” Rep. Carlos Curbelo of Florida, said.

Sen. Lindsey Graham of South Carolina recently argued that Trump should not take the country out of Paris: “If he does withdraw, that would be a definitive statement from the president that he believes climate change is a hoax,” Graham said on CNN’s State of the Union. “It would be taken as a statement that climate change is not a problem; is not real. So that would be bad for the party, bad for the country.”

George P. Shultz, who served as secretary of state under Ronald Reagan and secretary of the treasury under Richard Nixon, recently co-authored a New York Times op-ed titled The Business Case for the Paris Climate Accord. And three Republicans who headed up the U.S. Environmental Protection Agency during GOP administrations recently argued in a Washington Post op-ed that joining the international effort to fight climate change, via the Paris agreement, is the prudent path forward, adding, “With no seeming clue as to what’s going on, the president seems to have cast our lot with a small coterie of climate skeptics and their industry allies rather than trying to better understand the impact of increased greenhouse-gas emissions into the atmosphere. His policy of willful ignorance is a bet-the-house approach that is destructive of responsible government.”

The Trump administration, too, has members who have been arguing for remaining in the climate deal, including Tillerson, Defense Secretary James Mattis, economic adviser Gary Cohn, and the president’s daughter and adviser Ivanka Trump. Energy Secretary Rick Perry and Trump’s son-in-law and adviser Jared Kushner have also called for staying in but renegotiating or changing the standards of the agreement.

Widespread Support for the Paris Agreement Across the Board

As Media Matters noted last week, a number of newspapers, from The New York Times to USA Today to The Virginian-Pilot, have run editorials calling on Trump to keep the U.S. in the Paris deal. More than two-thirds of American voters support staying in the accord, according to a recent survey. And nearly every nation on Earth—195 in total—signed on to the agreement. The only exceptions are Syria and Nicaragua.

Pulling the U.S. out of the Paris deal would not only isolate the country from the international community, but also isolate the Trump administration from the business community. For a president who claims to be all about jobs and the economy, it’s an unwise move.