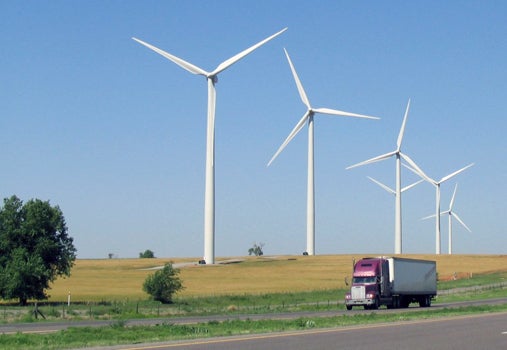 The PTC provides a tax credit of 2.2 cents per kilowatt-hour of renewable power generated and, if lawmakers fail to act, is set to expire in 2012. Originally signed into law by George H.W. Bush, the tax credit has helped to strengthen energy diversity, reduce reliance on fossil fuels and keep electricity costs low for homes and businesses across the country.

“For consumers of wind electricity, the economic benefits of the PTC are tremendous. The PTC has enabled the industry to slash wind energy costs—90 percent since 1980—a big reason why companies like ours are buying increasing amounts of renewable energy,” the companies wrote in their letter. “Extending the PTC lowers prices for all consumers, keeps America competitive in a global marketplace and creates homegrown American jobs.”

“Sprint has committed to reduce its reliance on fossil fuels and increase its use of renewable energy sources for electricity,” said Amy Hargroves, manager, corporate social responsibility at Sprint. “That’s why we have been actively working to meet our goal to secure 10 percent of our total electricity through renewable energy sources by 2017.  We support the extension of the Production Tax Credit for wind because it has enabled companies like Sprint to make the shift to abundant, clean, and homegrown wind energy.”

“New Belgium Brewing has made investing in renewable power a strategic priority because it’s the right thing to do for the environment, for our business, and for clean energy employment,” said Jenn Vervier, director, strategic development and sustainability at New Belgium Brewing. “Over the past several years, we’ve seen clean energy job growth in our home state of Colorado and a vision for building a more resilient power grid by integrating renewables. Extending the Production Tax Credit will help to ensure that those positive trends continue across the nation.”

“The Production Tax Credit helps every business that purchases renewable power: It’s just that simple,” said Mindy Lubber, president of Ceres, which coordinates BICEP. “Letting the PTC expire now would increase energy costs for homes and businesses at exactly the wrong time. For Congress, the message from business leaders is clear: Extend the PTC and help us build the economy.”

BICEP is an advocacy coalition of businesses committed to working with policy makers to pass meaningful energy and climate legislation enabling a rapid transition to a low-carbon, 21st century economy—an economy that will create new jobs and stimulate economic growth while stabilizing our planet’s fragile climate. BICEP is a project of Ceres.

Ceres is an advocate for sustainability leadership. Ceres mobilizes a powerful coalition of investors, companies and public interest groups to accelerate and expand the adoption of sustainable business practices and solutions to build a healthy global economy. Ceres also directs the Investor Network on Climate Risk (INCR), a network of 100 institutional investors with collective assets totaling more than $10 trillion.