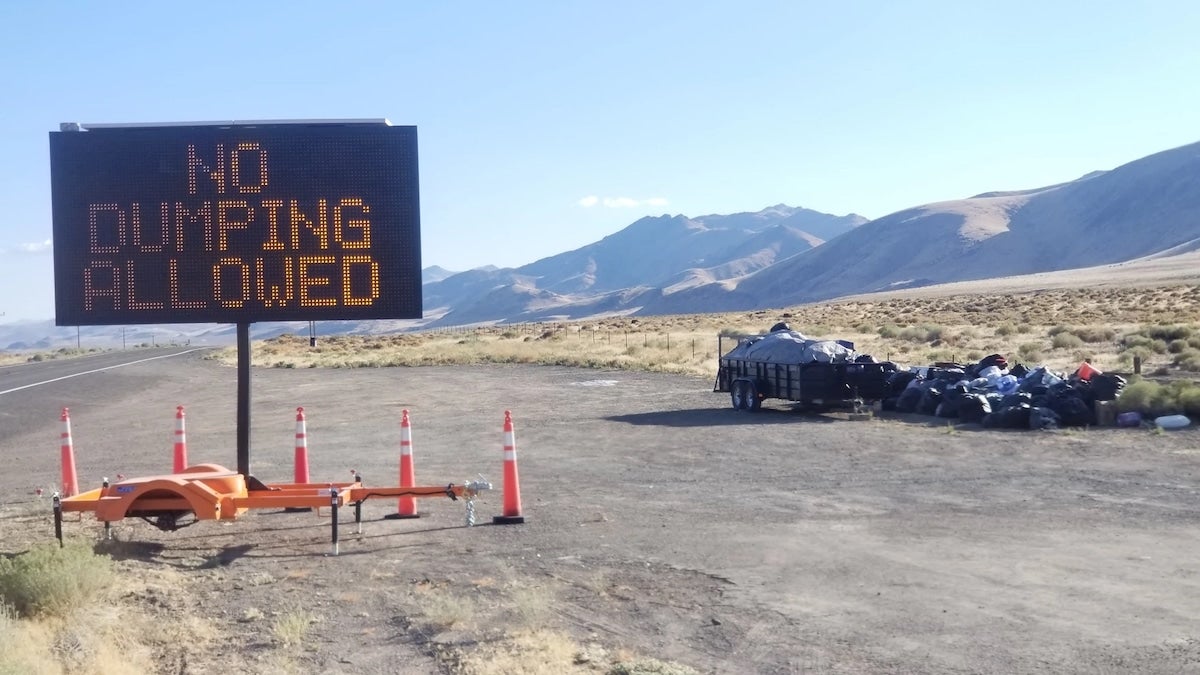 A large pile of rubbish near a sign that says "No Dumping Allowed." Paul Boger / KUNR Public Radio

Every year, the counterculture festival Burning Man takes over Black Rock Desert in Nevada, where tens of thousands of people come to “lift the human spirit, address social problems, and inspire a sense of culture, community, and civic engagement,” according to the organization’s website. But each year, some festival-goers skip the leave-no-trace principles, and instead illegally dump their garbage and camping equipment in nearby cities, like Reno, for the locals to deal with. Now, even places two hours from the festival site, like Lake Tahoe, are being inundated with Burning Man waste.

In Truckee, a town near Lake Tahoe, local business owners and officials shared their frustrations with those passing through the area after Burning Man who were stopping to dump off their trash.

“What I’ve seen are large construction bags of trash, alcohol bottles, tons of food, tents and large aluminum poles from shade structures,” Mark Lowenstern, owner of Cross Roads Car Wash in Truckee, told SFGate. “People just unload their motor homes. I’ve seen people sometimes spend four to six hours pulling everything out of their vehicles, then wash their cars and their belongings. One camper can fill up half of my capacity.”

This is despite one of Burning Man’s 10 Principles — Leaving No Trace. According to Burning Man, attendees should respect the environment and clean up after themselves, even leave places better than they found them. While festival-goers may follow that principle at the festival site itself, some are then offloading that trash in massive amounts, and illegally, in nearby towns and cities for others to clean up. It’s been an issue for years.

In August this year, Burning Man tweeted, “Not only is litter irresponsible and costly in terms of energy, time, and money for others, it is also illegal and reflects very badly on Burning Man. Dump your trash and recycling in authorized locations!”

Although local towns and businesses have expressed gratitude for the increase in business from Burning Man attendees, they also hope to see less pollution left behind.

This is not the first time Burning Man has been criticized for its impact on the environment. In 2019, Dezeen reported that Burning Man’s emissions are an estimated 100,000 tons of CO2 per year. Since calculating this carbon footprint, the festival crafted a sustainability plan to “Be Carbon Negative” by leveraging emissions offsetting through organizations like Climeworks and Project Vesta.

Also in 2019, the U.S. Bureau of Land Management maintained its restrictions on festival size, requiring a cap of 80,000 attendees, noting the amount of trash left behind.

‘Green Gentrification’ Can Force Out Long-Term, Lower-Income Residents
Making neighborhoods more “green” through environmental infrastructure and other green
By Cristen Hemingway Jaynes
Major Tech and Car Companies May Be Using ‘Blood Gold’ Mined Illegally From the Amazon Rainforest
Your iPhone may contain gold linked to the destruction of
By Olivia Rosane
EU Wastes Much More Food Than It Imports Every Year, Study Finds
The European Union (EU) wastes much more food than it
By Cristen Hemingway Jaynes