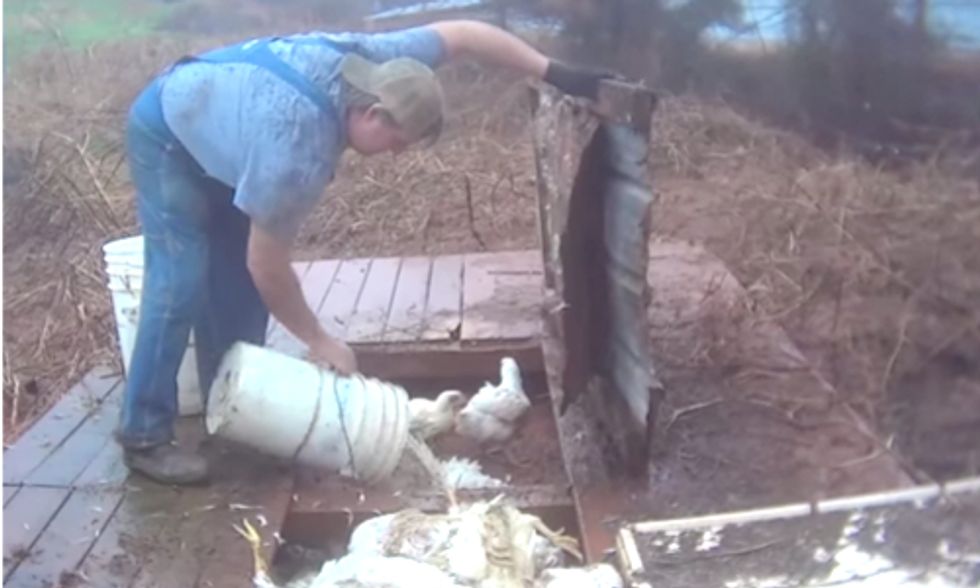 After watching Pilgrim's Shame: Chickens Buried Alive, it's tough to decide which is more disturbing—the combination of physical abuse and inhumane killing of chickens or the murderous mentality of the animal farmers who were secretly taped earlier this year.

The brief video and accompanying report on CNN's Erin Burnett Out Front actually makes a case for the latter. Hearing an animal farmer laugh about creating a "gravy that is simmering and squirming" from the buried-alive chickens he had just finished abusing is about as chilling as anything uncovered by an animal rights activist in recent years.

The video was produced by Washington DC-based Compassion Over Killing (COK), which had an investigator pose as a wide-eyed intern to get access to the atrocities at Prince Poultry, a North Carolina chicken factory. That factory supplies Pilgrim’s Corp., the second-largest chicken producer in the country. Aside from its own line, Pilgrim's supplies chicken to huge companies like Walmart, Kroger, Costco, Chick-fil-A, Wendy's, Burger King, Publix and others.

Though COK says that more than 8 billion chickens are raised and killed for meat in the U.S. each year, the organization says more die in the shocking fashion exposed in its video. So naturally, agricultural lobbyists are pushing legislation that would outlaw similar undercover investigations and videos. According to CNN, three states—Idaho, Missouri and Utah—have passed "ag-gag" laws, while another 14 have considered them.

When later confronted by CNN and shown the undercover video, Prince Poultry owner Tim Prince said the faux intern "took just the very minute, little things that we've done wrong." Pilgrim's, in a statement, told CNN that it has "retrained the grower in question and his employees."

COK Executive Director Erica Meier is hoping for a bit more than additional training, though.