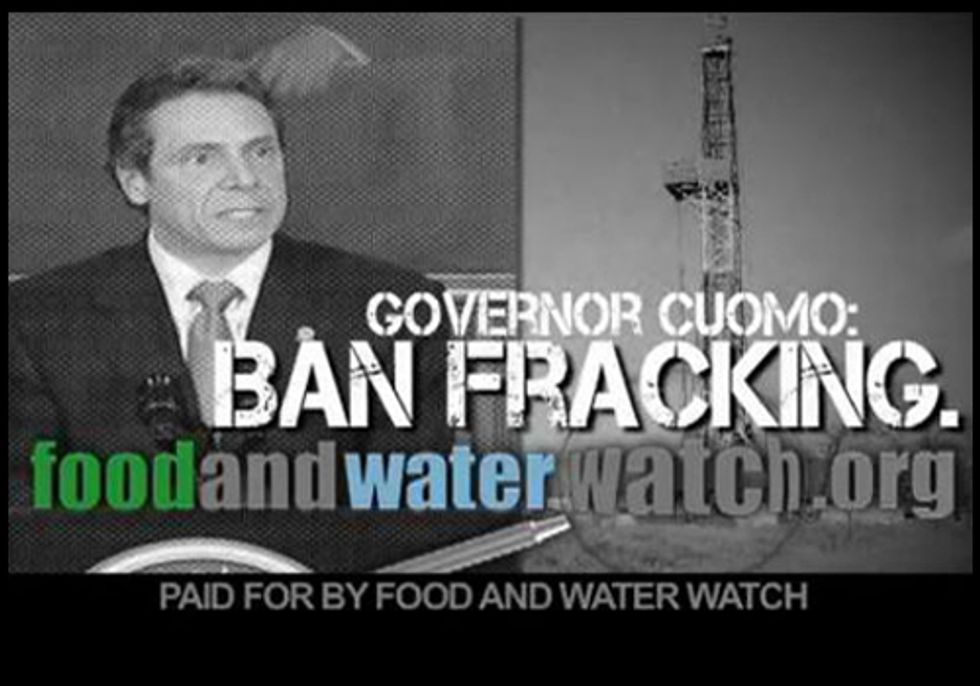 Amidst reports that New York State might green light hydraulic fracturing this year, the Buffalo Common Council passed a resolution on March 6 to support S4220 and A7218, bills that would prohibit fracking and wastewater treatment in New York. The resolution states that fracking’s negative impacts could affect Buffalo and other Great Lakes communities. The Common Council also urged
Governor Cuomo not to move forward with plans to open New York to fracking, explaining that regulation cannot protect against mistakes, some of which have recently come to light through the U.S. Environmental Protection Agency (EPA) investigations in Pennsylvania and Wyoming.

“The Buffalo Common Council voted to ban fracking in the City of Buffalo due to its negative effects on groundwater and neighboring properties,” added Council President Richard Fontana. “This must be any government’s top priority to protect the water supply and the health of the residents in the area.” In February 2011 Buffalo became the first city in New York state to protect residents from drilling and waste disposal by passing municipal legislation opposing fracking and fracking waste in order. Buffalo has led the statewide fight against fracking with their municipal legislation, with more than 60 municipalities having passed some sort of local ordinance restricting fracking since. Now, the second largest city in New York is standing up again, this time to protect its neighbors.

"The council recognizes that New York's urban centers would be sacrificing its rural towns in order to tap into shale gas,” said Rita Yelda of Food & Water Watch. “This is a monumental and historic day not only for Buffalo, but for all of New York State, and for communities everywhere affected by gas drilling."

The city is the home district of the Senate Environmental Conservation Committee, where the ban bill, SB4220, is currently stalled. "There has been overwhelming support for this resolution and letter in the community. We were there cheering on the local ban and now we're here packing council chambers to again show our support. However, it's also disappointing to see that at the state level, legislators have not taken our side," said Yelda.

Fracking has been cited as a threat to surface and ground water throughout the region, and has been blamed for fatal explosions and the contamination of drinking water, local streams, the air and soil. Collateral damage includes lost property value and drying up of mortgage loans for prospective homebuyers. On Jan. 11, the Department of Environmental Conservation (DEC) closed the public
comment period on their fracking study, the Supplemental Generic Environmental Impact Statement (SGEIS).

Overwhelming opposition to fracking in New York has been expressed throughout the DEC’s public comment period on their study, with more than 60,000 people submitting written comments. “Tens of thousands of people and dozens of major advocacy organizations across New York have told the DEC and Governor Cuomo that regulations won’t make fracking safe," said Yelda. "Many public comments across the state have instead asked for a permanent ban on fracking. Buffalo has joined in on asking Governor Cuomo to reject the flawed environmental impact study and instead pass a bill banning fracking in New York.”

“This resolution really shows how far we have come to protect the citizens of this community. For the longest time, there had been a stigma attached to the Buffalo area due to the high contamination from the former heavy industries that have since left the area,” said Councilmember Joseph Golombek Jr. “This resolution shows that our local elected officials are willing to stand up to protect our citizens, and our environment, from being a dumping ground for hydro-fracking waste. Many see this as just the newest form of heavy industrial contamination.”

"As supplies of fresh water in the U.S. are dwindling, New York State should conserve its most envied and abundant supplies of fresh water for future human consumption and not use it as a vehicle to extract toxic-laden natural gas buried thousands of feet below the Earth's surface. We support the Buffalo Common Council and urge Governor Andrew Cuomo to support the ban on hydraulic fracturing in New York State," said Charley Bowman, executive director of the WNY Peace Center.

"All of New York is grateful for the Buffalo Common Council's leadership in calling for a statewide ban on fracking," said Jessica Roff, a volunteer with Food & Water Watch in New York City. "We urge the New York City Council and other local officials to follow Buffalo's example in standing up for the safety of our state's water, air and food."

“There is a growing recognition that the state’s proposed regulations will fail to protect New York residents and the state’s drinking water supply from the toxic chemicals used in fracking. The question is now whether Governor Cuomo will listen to the oil and gas industry or the people of New York. There is a strong mandate for the Governor to put a stop to the process of opening up New York to fracking,” said Yelda.

On March 5, following Buffalo's lead, the Niagara Falls Common Council passed a similar resolution supporting a statewide ban on fracking as a message to Cuomo. They also passed legislation to prohibit fracking and fracking waste from entering the city. This legislation makes Niagara Falls the latest municipality to pass local legislation protecting their residents.