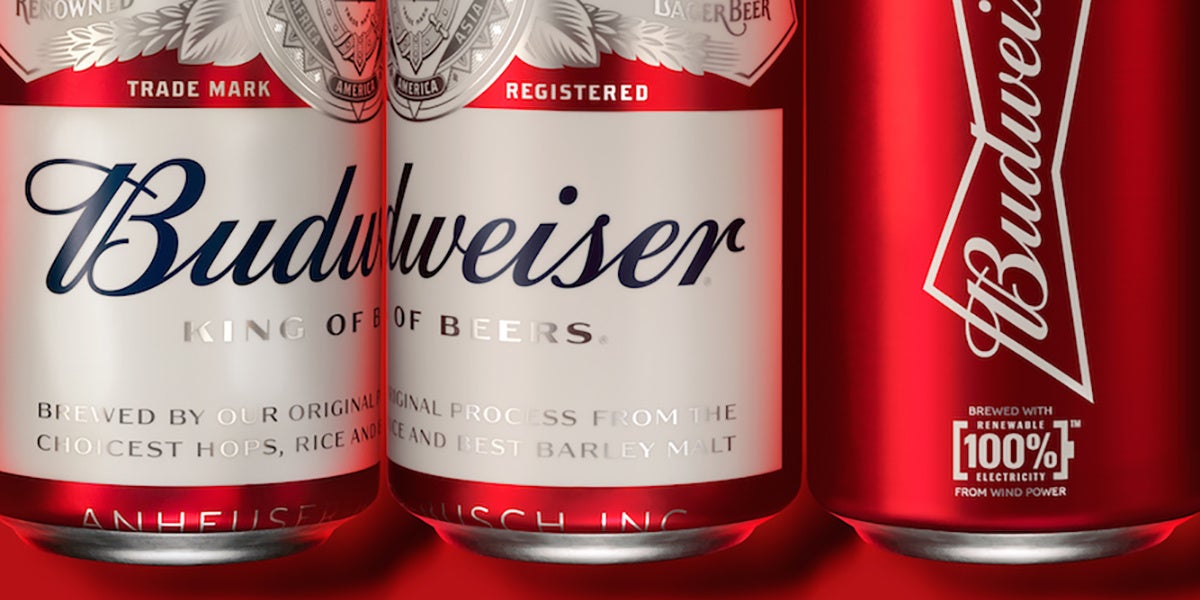 You’ve heard of clean tech, but how about a clean buzz? While plenty of microbrewers, craft distillers and boutique wine-makers have in recent years made admirable strides toward greater environmental stewardship, Anheuser-Busch may well succeed in bringing the green-booze movement mainstream.

Last month, the 165-year-old owner of brands including Budweiser, Corona and Stella Artois announced that the roughly $400 million worth of electricity it purchases each year would be 100-percent renewable by 2025. The beer Goliath’s stated sustainability goals also include ambitious vows to package beverages in majority-recycled content, improve water efficiency, work directly with farmers, and reduce carbon emissions by 25 percent. Perhaps most notably, all cans and bottles of Bud, as of this past Earth Day, sport a “100% Renewable Electricity” symbol. The idea is to make consumers aware that the suds they’re swilling can be credited to sources such as solar and wind.

“Budweiser is going to be carrying the flag for renewable energy around the world,” said Anheuser-Busch CEO Carlos Brito in a statement announcing the new pledges.

That remains to be seen. But at the very least, the new initiative is expected to boost declining revenues in the company’s largest market, the U.S.—where Bud Light and Budweiser for years have been losing market share to smaller craft brews, wine and spirits. While the company has already tried changing labels to connect with certain demographics (remember 2016’s aggressively patriotic “America” branding?), this marks Anheuser-Busch’s first real attempt at reaching consumers motivated by environmental concerns.

An impressive list of large companies—including Bank of America, BMW, Burberry, Citibank, Coca-Cola, Estée Lauder, GM, Goldman Sachs, Johnson & Johnson, Kellogg’s, Lego, Mars and Nike—have quietly committed to purchasing 100-percent renewable energy. But Anheuser-Busch seems to be the only one going out of its way to tell its customers, Look, even your beer thinks climate change is real and wants to do something about it!

What’s doubly remarkable is the fact that Budweiser’s target demographic looks nothing like Patagonia’s or Ben & Jerry’s—rather, it’s mostly white, working-class men in the interior of America. “Beer snobs don’t drink Bud, but the guy in a bar after a shift at a factory does,” said business consultant Shel Horowitz, who coauthored 2016’s Guerilla Marketing to Heal the World. “Probably a significant percentage of their market voted for Trump.”

Horowitz said the new label decorating cans and bottles of Bud could be a real game-changer. “It creates what marketers call ‘social proof,’ and tells consumers, ‘It’s OK to be environmentally focused because all my friends are doing it,'” he explained. “Most people across all demographics want a healthy planet that sustains human, animal, and planetary health, but many of them are afraid to say so if they travel in hostile circles. This creates legitimacy for the position that clean energy isn’t just some libtard nonsense.”

Social-impact consultant Christen Graham adds that such broadcasting helps to normalize the notion of clean energy. “This labeling strategy builds awareness, sparks conversation about what exactly it means to be sourcing clean energy, and offers a gateway to the bigger discussion that consumers—particularly millennials—increasingly expect,” she said. “The challenge is for the company to maintain transparency everywhere, even with more challenging questions.”

After all, as business strategist James Reeves noted, the moment a company is inconsistent about its corporate social responsibility actions, it undermines any gains. “Think of BP, which led the way on green energy only to have its reputation erased due to Deepwater Horizon,” he said. “However,” Reeves adds, “Budweiser seems to be playing a long game. From a marketing perspective, its messaging will likely build greater affinity for the brand over time, and take away some of the mysterious, political sting of climate change deniers.”

Ideally, Anheuser-Busch’s new initiative and labels will set an example for other corporate giants. Because while the onus has long been on businesses to set a good, green example, Horowitz noted that nowadays, the federal government isn’t providing them with any help. “Incentives in the tax code are going away, regulators are not clamping down on dirty competitors, and there’s no real support from the government,” he said. However, he posits that even in the age of Trump, forward-thinking companies will continue to step up to advance sustainability goals. “The economic incentives are so compelling that businesses will have to—otherwise, they’ll get their clocks cleaned by businesses that have slashed their energy, materials, and waste costs. The current administration may not be enthusiastic, but American businesses are aware that if they leave a vacuum, China, Germany, and other countries are ready to jump in.”

Graham points out that Trump-administration policies yield less influence on a Belgian-owned business like Anheuser-Busch. “They likely embrace corporate social responsibility from a European perspective, which is more environmentally progressive than America’s,” she said. “However, now that businesses recognize the double bottom line benefits of clean-energy sourcing—it’s good for the planet and good for their costs—there will be more. It’s basic dollars and cents—wind energy is far more cost-effective than coal now.”

Whether or not every single beermaker likes cutting costs and pleasing environmentalists, they’ll all have to do some ecological soul-searching before too long, as issues of water scarcity and water quality pose particularly serious threats to the food and beverage industry. “This is the silent crisis that’s sneaking up on all industries but will hit this one particularly hard,” Reeves said. “We don’t see many headlines about it now, but in a few decades, it’s all that companies, civil society, and government will be focused on.”

May we all be swimming in a river of clearly labeled eco-beer when that time comes.