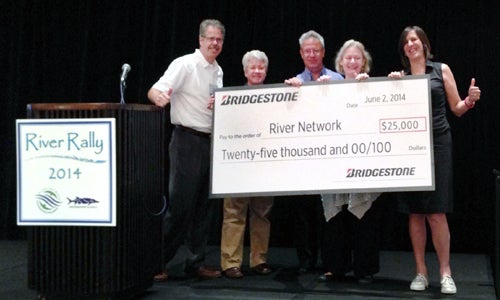 Yesterday at River Rally, during the largest international gathering of water protection advocates in Pittsburgh, PA, Bridgestone presented River Network with a $25,000 gift in support of its ongoing work to protect and restore waterways throughout the U.S. 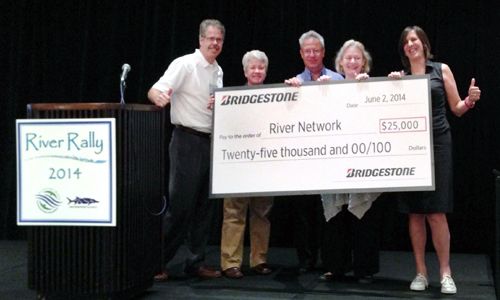 River Network has received support from Bridgestone since 2012, as part of the company’s Tires4ward program.

“The work that River Network is doing nationwide really encompasses Bridgestone’s One Team, One Planet approach toward ensuring a healthy environment for current and future generations,” said John Sheerin, retail environmental director at Bridgestone Retail Operations. “We are pleased to offer additional support for the important work they do to preserve our nation’s rivers and waterways.”

Bridgestone’s support comes from its annual Rethink Green campaign. During the month of April, Bridgestone, the world’s largest tire and rubber manufacturer, encouraged consumers to use its Fuel Savings Calculator to calculate the average estimated savings they could receive by switching to the company’s energy and fuel-efficient Ecopia tire line. For every dollar saved on the online Fuel Savings Calculator in April, Bridgestone committed to donate ten cents, or up to $25,000, to River Network to continue its work helping locally-led watershed groups survive and grow, according to a company statement.

“We are so grateful for the ongoing support that Bridgestone provides our organization to empower local efforts,” said Nicole Silk, president of River Network. “Bridgestone is an engaged leader in conservation.”

River Network has received support from Bridgestone since 2012, as part of the company’s Tires4ward program. This program was founded on the company’s vision to create a waste-free tire industry and works to assure that for every new tire Bridgestone sells in the U.S. is recovered and sent to a valuable new use.

Tires4ward collects tires recovered in organized clean-up events of public spaces, watersheds, rivers and waterways at no charge. More than 300 community clean-ups have recycled more than 85,000 used tires that were recovered from streams, waterways and communities nationwide since the launch of the program in 2012.

“The Tires4ward cleanup program helps rivers across our country and supports our community to care of our most precious resource, water. Companies like Bridgestone demonstrate that we can have a profound impact when we work together,” said Silk.

84 Businesses Honored as ‘Best for the Environment’

New York Yankees Ready to Lead the League in Sustainability