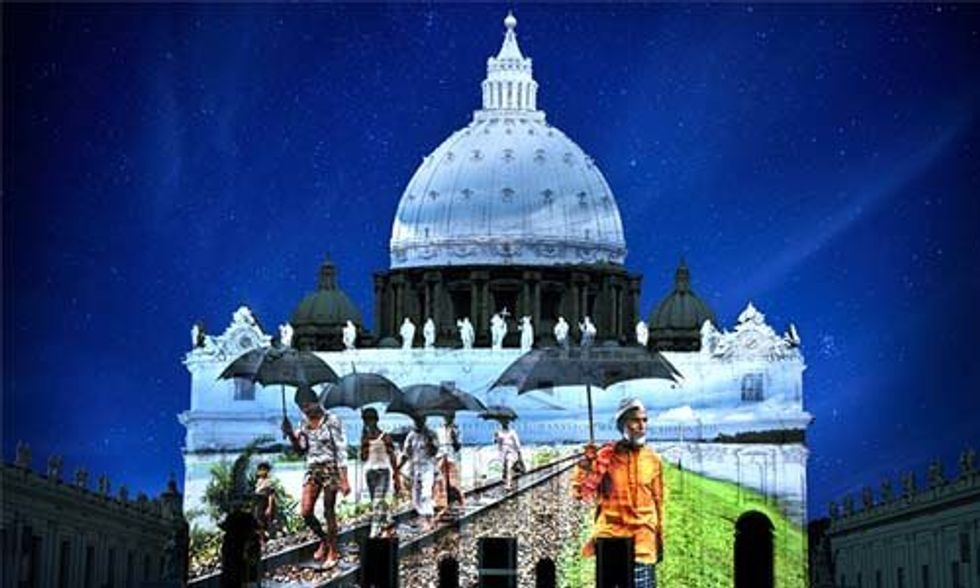 A coalition convened by the World Bank Group's Connect4Climate initiative presented a gift of contemporary public art, Fiat Lux: Illuminating our Common Home, to Pope Francis on the opening day of the Extraordinary Jubilee of Mercy in December 2015, to galvanize action and drive global attention to the importance of preserving our natural environment and tackling climate change.

Watch the full show of the breathtaking art projection at the Vatican, on St. Peter's Basilica:

The coalition comprised of Paul G. Allen's Vulcan Inc., the Li Ka Shing Foundation and Okeanos, in partnership with The Oceanic Preservation Society and Obscura Digital, worked under the auspices of Connect4Climate, the World Bank's global partnership program dedicated to driving global action on climate change.

At this unprecedented and historic event, beautiful images of our shared natural world were projected onto the facade of St. Peter's Basilica in a contemporary work of public art that tells the visual story of the interdependency of humans and life on Earth with the planet, in order to educate and inspire change around the climate crisis across generations, cultures, languages, religions and class.

“We are honored to be working with the Vatican to raise awareness of an issue so critical to our shared goal of ending extreme poverty," World Bank Group President Jim Yong Kim said. "The poorest people in the world are disproportionately affected by the effects of a warming climate and are most vulnerable to natural disasters and extreme weather. This impressive initiative will draw global attention to the urgency of tackling climate change for the sake of people and our planet."

The large-scale architectural public art installation was inspired by the themes of climate change, human dignity and the Earth's living creatures in the Encyclical “Laudato Si'" of Pope Francis. Programed to coincide not only with the Jubilee, but also with COP21 in Paris, the historic occasion called on citizens of the world to join a global movement to protect our common home.

An artistic rendering of a picture that was illuminated at St. Peter's Basilica. Photo credit: Steve McCurry / Obscura Digital

"The fight against climate change invokes each of us in a battle for civilization and democracy," Italy's Minister for the Environment, Land and Sea Gianluca Galletti said. "This was explained by the Holy Father in his extraordinary encyclical Laudato Si: respect to the environment is the condition to reaffirm universal rights and defend human dignity, to guarantee global security, to build a fairer world ... Intercultural dialogue is our most important objective and the most efficient tool for peace."

“We are proud to support the realization of this gift of art to Pope Francis and to work with our creative partners to highlight the biggest issues facing mankind: poverty and climate change," Lucia Grenna, program manager of the World Bank Group's Connect4Climate global partnership program, added. "This artistic display will tell a powerful visual story of the interdependency of all life on earth with our environment and we hope inspire the teams in Paris to push for the most ambitious deal possible."