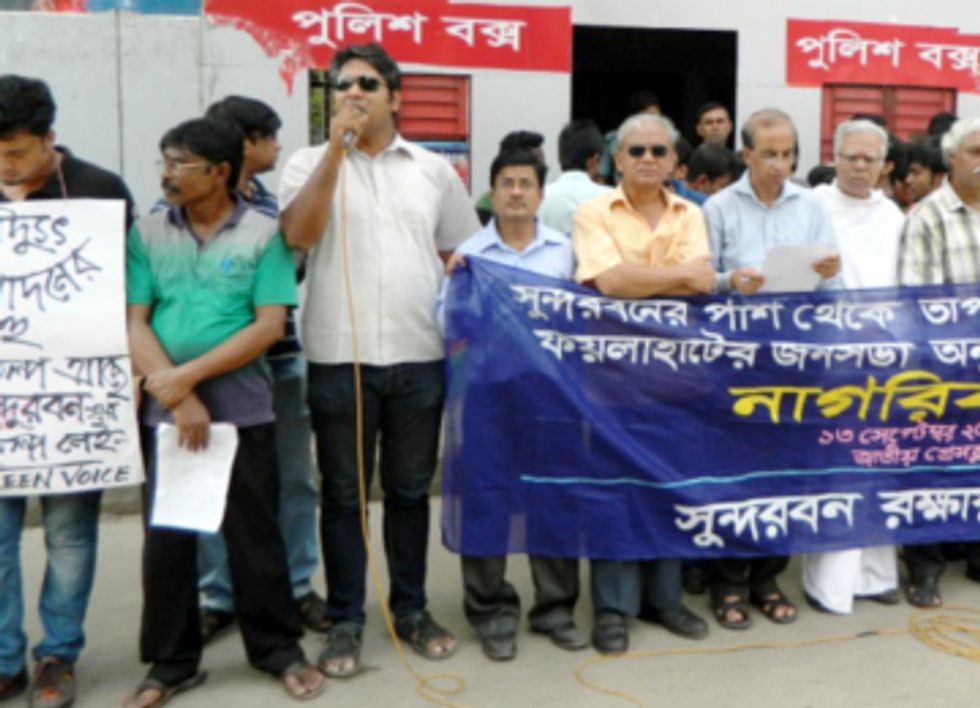 Buriganga Riverkeeper Sharif Jamil and hundreds of his fellow Bangladeshis, including BAPA, the largest civil society platform in Bangladesh for the environment, and the National Committee for Saving Sundarbans (NCSS), are fighting to save the Sundarbans, an irreplaceable world heritage site, from the destruction of a massive new coal-fired power plant. To show the government the size and scale of the opposition, they joined National Committee to Protect Oil, Gas and Mineral Resources, Power and Ports who organized a five-day, 400-kilometer march from Dhaka to Rampal on Tuesday. Their goal is to stop the Rampal coal-fired power plant and all activities that would destroy the Sundarbans, the world’s largest mangrove forest. It was designated as a world heritage site because it supports an exceptional number of rare plants and animals including the world famous and endangered Bengal Tiger.

The Sundarbans are not only critical to the survival of wildlife, they are vitally important to the survival of thousands of Bangladesh’s people because they provide a buffer to storm surges, cyclones and food sources. Bangladesh is widely recognized as one of the world’s most vulnerable nations to climate change because it is less than 20 feet above sea level. One of the worst floods in modern history struck the country in September of 1998, killing 1,050 people and making 25 million more homeless. It has been estimated that sea-level rise caused by climate change could result in as many as 30 million climate refugees in Bangladesh. Coal-fired power plants are the largest source of human-made carbon emissions that contribute to climate change.

“If constructed, the Rampal coal-fired power plant will not only harm a UNESCO world heritage site and much of the irreplaceable wildlife it contains, but will also fuel ever-faster-rising sea levels that will drown the people of Bangladesh," said Jamil. "Millions of peoples’ lives and livelihoods are at stake.”

The proposed massive 1320 MW Rampal coal-fired power plant is a joint venture involving the Indian state-owned National Thermal Power Corporation (NTPC) and Bangladesh state-owned Power Development Board (PDB). But the burden of the polluted air, water and waste is not jointly shared. Most of it will be borne by the people of Bangladesh while India gets the power. In an excellent analysis, Rampal Coal-Fired Power Plant: Who Gains, Who Loses, Economics Professor Moshahida Sultana Ritu shows just how bad the project is for the people of Bangladesh. Joining Professor Ritu in providing additional argument against construction of the plant is Professor Anu Muhammad. He wrote a scholarly point-by-point decimation of the shoddy, incomplete and inaccurate environmental impact analysis and summarized his review of the process used to site the coal plant in the Sundarbans as a project of deception and mass destruction.

During the 400-kilometer, five-day march, Jamil and Muhammad, along with thousands of citizens and activists, will voice their concerns over the risks the power plant poses to not just the Sunderban’s health, air, water, land and wildlife but to the very survival of Bangladesh as it faces the worst potential impacts of climate change. Waterkeeper Alliance stands in solidarity with all the people of Bangladesh who are marching this week to protect the Sundarbans and their country’s future.

If you are inspired by their courage we urge you to support the Buriganga Riverkeeper organization and the NCSS. The NCSS was created to oppose the government’s move to set up the power plant in Rampal. Jamil, along with a team of young volunteers, have also decided to go on hunger strikes in several places in the country.

“We are in the process of making a larger platform to initiate a peaceful movement with the local people to save the Sundarbans from the Rampal Project,” said Jamil.

“The Sundarbans may be one of the most inappropriate places in the world to build a polluting coal-fired power plant,” said Waterkeeper Alliance’s International Director Sharon Khan. “It would be like building one on top of Old Faithful in Yellowstone National Park in the U.S. or at the foot of Uluru in Australia.”

Waterkeeper Alliance calls on conservation organizations all over the world to join the fight to oppose the Rampal coal-fired power plant. The need for international support is urgent because the government of Bangladesh recently announced it would lay the foundation of the power plant on Oct. 22, despite vehement and widespread opposition by environmental activists and other social groups.

Sign the petition to stop the coal-based Rampal power plant and save Sundarban.