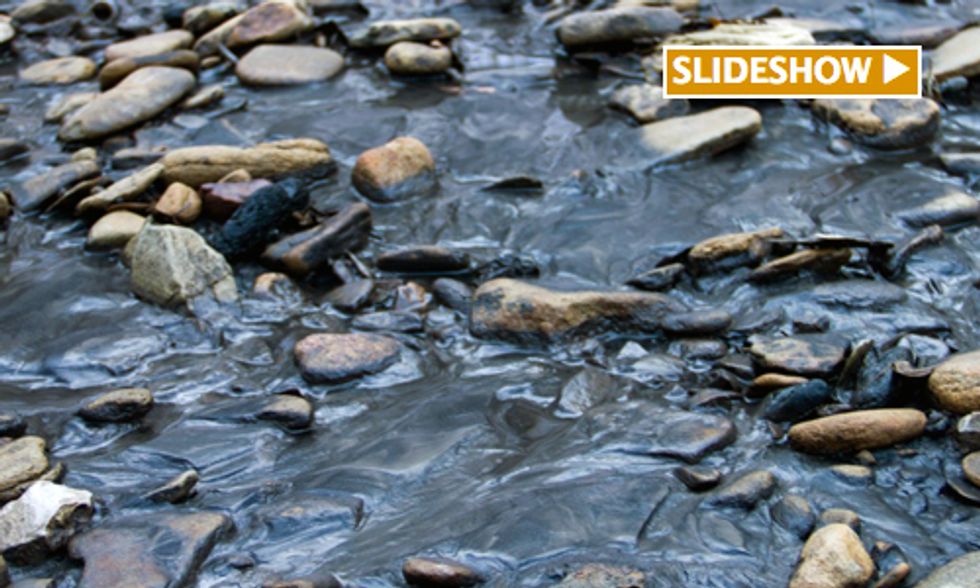 The West Virginia Department of Environmental Protection (DEP) is investigating a coal slurry spill, reported to be of "significant" size, from a pipe that ruptured early this morning at the Kanawha Eagle Prep Plant in Kanawha County, WV. The slurry spilled into Fields Creek and has apparently begun to reach the Kanawha River, about 3.5 miles away.

The slurry contains a frothing chemical, Flomin 110-C, which contains MCHM, a chemical used to prepare coal for combustion. Officials report there are no public drinking water intakes that would be immediately affected downstream of this spill. According to the DEP, workers at the plant shut down slurry pumps when the leak was discovered and DEP inspectors are on the scene of the spill. The spill was reported to the DEP by the company at 7:30 a.m.

This is the third significant coal-related water pollution event in the Southeast in the last month. On Jan. 9, a tank holding Crude MCHM, dumped about 10,000 gallons of the toxic chemical into the Elk River just a few miles upstream of a major drinking water intake near Charleston, WV. A federal emergency was issued and 300,000 people were told not to use their tap water for drinking, bathing or cooking. On Feb. 3, a large pipe under a coal ash pond owned by Duke Energy ruptured in Eden, N.C., sending up to 82,000 tons of ash and 27 million gallons of tainted water into the Dan River about 23 miles upstream of the water intake for the city of Danville, VA.

“A spill of a chemical used by the coal industry, a coal ash spill and now a coal slurry spill—the common denominator here is the glaring lack of enforcement of the coal industry which has enjoyed political cover for far too long,” says Erin Savage, water quality specialist, M.E.Sc. from Yale School of Forestry and Environmental Studies.

“The coal industry prefers to talk about a supposed ‘war on coal,’ but these spills remind Americans why we have environmental rules and why we need much stronger enforcement to keep our water safe,” says Matt Wasson, director of programs, Ph.D. in ecology from Cornell University.

Two water quality specialists with Appalachian Voices are on their way to the site of the coal slurry spill. Stay tuned to EcoWatch for the latest on this spill.