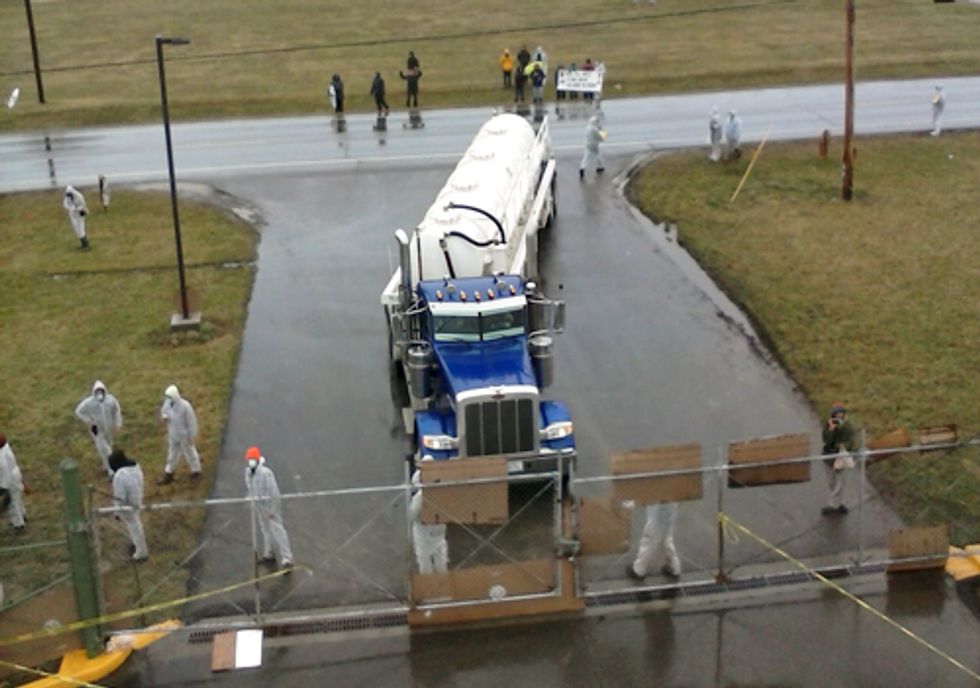 Ohioans and environmental groups including Earth First! have disrupted operations at Greenhunter Water's hydraulic fracturing or fracking wastewater storage site along the Ohio River in Washington County, Ohio. Nate Ebert, a 33-year-old Athens County resident and member of Appalachia Resist!, ascended a 30 foot pole anchored to a brine truck in the process of unloading frack wastewater, preventing all trucks carrying frack wastewater from entering the site.

More than one hundred supporters gathered at the facility, protesting Greenhunter’s plans to increase capacity for toxic frack wastewater dumping in Ohio. Greenhunter is seeking approval from the Coast Guard to ship frack wastewater across the Ohio River via barge at a rate of up to half a million gallons per load. The Ohio River is a drinking source for more than five million people, including residents of Cincinnati, Ohio and Pittsburgh, Pennsylvania. Test results from multiple frack waste samples reveal high levels of benzene, toluene, arsenic, barium and radium, among other carcinogenic and radioactive chemicals.

“Our governor, legislature and regulatory agencies have all failed in their obligation to protect Ohioans from the predatory gas industry,” said Ebert. “Greenhunter wants to use our water sources as dumping grounds for their toxic, radioactive waste. We are here to send a message that the people of Ohio and Appalachia will not sit idly by and watch our homes be turned into a sacrifice zone.”

Frack wastewater dumping has generated resistance across Ohio, including direct actions disrupting wastewater disposal operations from Youngstown to Athens County. The waste is injected underground into more than 170 wells statewide, contaminating water and causing numerous earthquakes across Ohio from Marietta to Ashtabula, most notably a 4.0 earthquake in Youngstown. Surface spills are commonplace across Ohio, including the recent dumping of at least 20,000 gallons of toxic and potentially radioactive fracking wastewater into a storm drain that empties into a tributary of the Mahoning River in Youngstown, Ohio.

“Fracking chemicals and cancer go hand in hand,” said Teresa Mills of the Buckeye Forest Council, a grassroots Ohio organization seeking a ban on frack wastewater injection. “Greenhunter plans to recklessly endanger the drinking water of millions of residents of Ohio, Pennsylvania and beyond. How many kids have to get cancer before we decide that saturating Ohio's rivers and aquifers with toxic waste is not worth it? We need a ban on injection wells to protect our air, our water and our children.”

Other groups participating in Tuesday's action include Tar Sands Blockade, Radical Action for Mountain Peoples' Survival (RAMPS), a coalition of indigenous leaders including representatives from No Line 9 and the Unis'tot'en Camp, Great Plains Tar Sands Resistance and Earth First! chapters from across the country.

Tuesday’s action is the latest in a series of escalated acts of resistance to destructive extractive industries. On Monday, Pennsylvanians disrupted construction of the Tennessee Gas Pipeline in the Delaware State Forest. In January, Navajo residents from Black Mesa, Arizona joined with Appalachians to protest strip mining at the headquarters of Peabody Energy. International resistance to tar sands mining has continued to escalate from the Tar Sands Blockade in Texas and Great Plains Tar Sands Resistance in Oklahoma, to the Unist’ot’en Camp in Wet’suwet’en Territories.

“I am here because the struggle against frack waste dumping in Ohio is the same as our resistance to the blasting of the mountains in my backyard in West Virginia,” said Kim Ellis of RAMPS. “Until we put a stop to poisonous and exploitative extractive practices everywhere, we will continue to fight.”