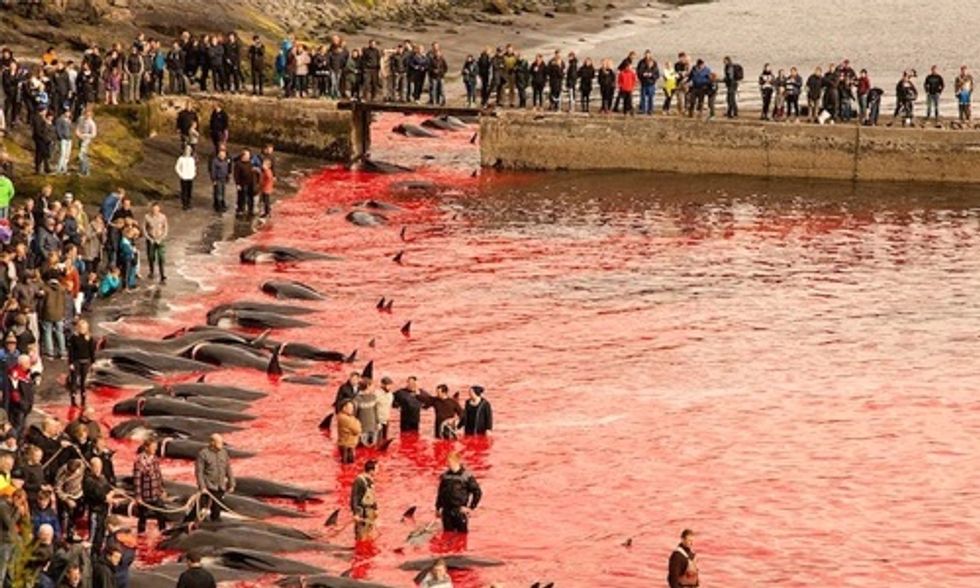 The people of the Faroe Islands have a tradition of herding whales into a cove and slaughtering them for food and other uses, which, needless to say, draws condemnation from people worldwide who see the custom as archaic, cruel and unnecessary.

Just last month, more than 20 pilot whales were slaughtered. For decades, the nonprofit Sea Shepherd has been trying to stop the slaughter of these cetaceans, even enlisting the help of probably the biggest celebrity animal welfare advocate—Pamela Anderson.

Well today, the Faroese are at it again and Sea Shepherd is there documenting it.

Sea Shepherd has led the opposition to the annual slaughter since the 1980s, hoping to bring what they've dubbed "the grind" to a grinding halt.

Unfortunately, there was nothing Sea Shepherd could do to stop the slaughter of what appears to be dozens of pilot whales.

On Monday, two members of Sea Shepherd were arrested by the Danish navy (The Faroe Islands are an autonomous country within the Danish kingdom) after "following a flotilla of small Faroese boats thought to be heading for" a slaughter, reports The Guardian. Per a new law—the Faroese Pilot Whaling Act—anyone caught trying to stop the hunt could face up to two years in prison. The two activists' court appearance is scheduled for today.

This footage released by Sea Shepherd conservation campaigners shows a mass slaughter of pilot whales in the Faroe islands.