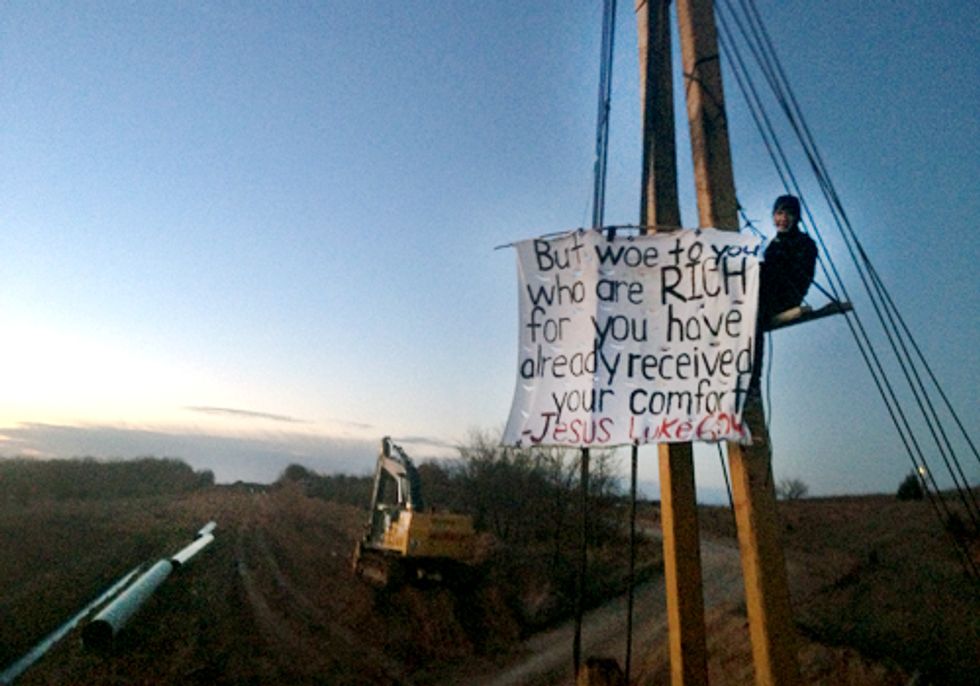 Earlier this morning, Stefan Warner, a youth pastor who was born and raised in Harrah, OK, locked himself to machinery being used to build the toxic Keystone XL tar sands pipeline through Creek land near Schoolton, OK.

Warner is taking action to protect the health of the North Canadian River, communities and land that this pipeline would run through from being irreversibly damaged by diluted bitumen (tar sands) leaks and spills. He is sending a clear message that the current day colonialism and disregard for the health and sovereignty of indigenous peoples in Alberta, Canada, and along the pipeline is unacceptable—from a Christian perspective, as well as a human perspective.

Tar sands pipelines have a horrendous track record: the existing Keystone 1 pipeline leaked 12 times in its first year, and at least thirty times to date. In 2010, the added dangers of tar sands pipelines were demonstrated by Enbridge's Line 6B pipeline spill of more than a million gallons of diluted bitumen into the Kalamazoo River in Michigan. The Kalamazoo tar sands spill is the costliest inland spill in U.S. history, draining the oil spill coffers and placing the $800 million and rising price tag onto the backs of local and federal taxpayers. But it is not the monetary burden that weighs heaviest. It is the toll on human life and the health of local ecosystems that is immeasurable, especially the toxicity of the diluted bitumen and undisclosed proprietary chemicals has proven devastating.

In addition to the immense dangers posed by the Keystone XL, TransCanada has been misrepresenting the economic effects of the pipeline. The majority of construction jobs are temporary and have been filled by Wisconsin-based contractor Michel's, not Oklahomans and Texans. Despite TransCanada and the State Department's rhetoric of energy independence, the diluted bitumen transported by the Keystone XL is destined for export to foreign markets after being refined in Gulf Coast refineries, and the Natural Resources Defense Council asserts that the KXL will increase domestic gas prices.

“I grew up in a town where the North Canadian River runs right through, and we can't let the North Canadian become another Kalamazoo," said Oklahoman youth pastor Stefan Warner. “I figure folks have to take action to stop our beautiful Oklahoma from being marred by a foreign corporation, and stand up to fight big corporations who think that poisoning people and stealing land is acceptable so long as they make a profit."

Warner is acting with Great Plains Tar Sands Resistance, a coalition of Oklahomans and allies fighting to prevent construction of the Keystone XL which will bring dangerous and toxic diluted bitumen from the biome-consuming tar sands gigaproject to refinery communities in the Gulf. This action comes in the wake of dozens of similar actions which have actively fought construction of the Keystone XL in Oklahoma and Texas. In light of reports of shoddy welding by TransCanada whistleblower Evan Vokes and the recent release of photographs depicting holes in the weld of a pipe buried in Texas, the struggle to keep the Keystone XL from being completed is even more urgent.

At 8 a.m., direct support for Stefan was arrested without warning and placed in police car. Six other people on site are being detained.

At 9 a.m., six people detained now arrested. Seven police vehicles are on scene. Workers have lowered side-boom in disregard of Stefan's safety and OSHA regulations. Stefan is still locked to machinery but lying painfully face-down on the lowered arm. Police are obscuring Stefan from view and not allowing anyone within photographing distance.

At 9:15 a.m., another individual arrested. This person was not initially detained but was prevented from accessing her vehicle since 8 a.m. Stefan
is still holding strong. It also appears that this action is also blockading an active frack site.