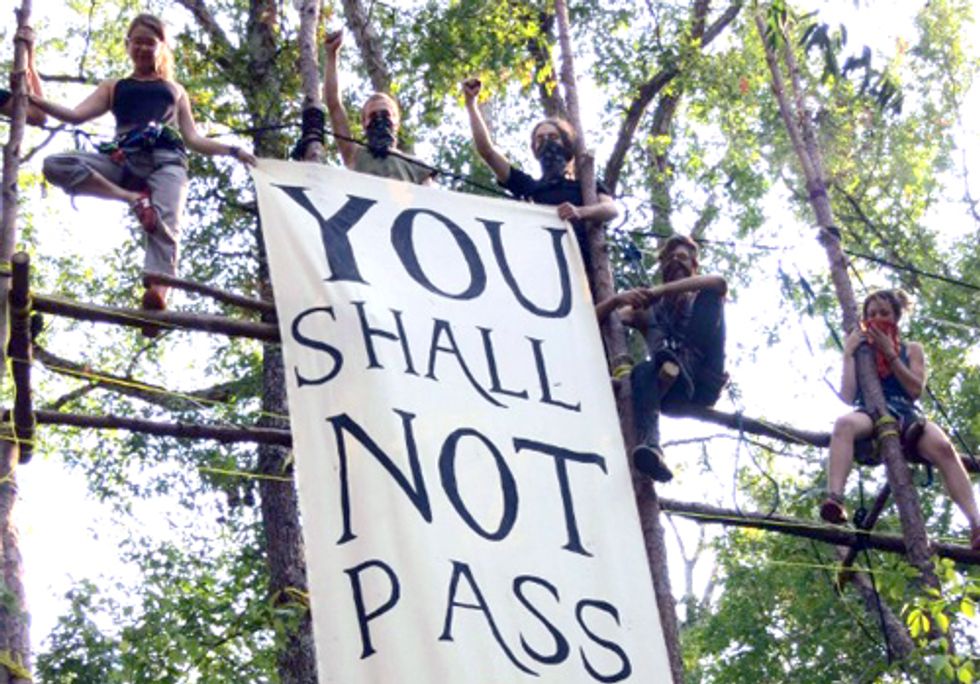 This morning eight people climbed 80 feet into trees in the path of Keystone XL construction, and pledged not to come down until the pipeline is stopped for good. Construction cannot proceed until tree-sitters descend as TransCanada clear-cuts through hundreds of trees to make way for the toxic tar sands pipeline.

The blockade is carefully organized to ensure that everyone sitting in the trees can remain safe as long as TransCanada does not attempt to continue clear-cutting the trees. These ardent advocates of landowner’s rights and climate justice have the safety equipment and food supplies to last indefinitely.

“Today I climbed a tree in the path of Keystone XL to demand TransCanada stop construction of this dirty and dangerous pipeline. This pipeline is a disaster for everyone it touches, from the cancer tar sands extraction is causing indigenous communities to the water poisoned by inevitable tar sands spills to the landowners whose land has been seized and to everyone that will be affected by climate change,” said Mary Washington, one of the Tar Sands Blockade members sitting in a tree.

It’s not easy to see our friends disappear up a tree, exposed to the elements and not know when we will see them again. But knowing what this pipeline is doing to our neighbors and the planet, we are more resolved than ever to keep fighting this pipeline by whatever means we can.

This blockade is a continuation of an unprecedented summer of actions against fossil fuel infrastructure across America, from Montana to Ohio to New York. As a record heat wave baked the country, Americans stood up in unheard of numbers to oppose fossil fuels that are contributing to climate change.

Climate change killed half a billion trees in Texas last year, and if TransCanada cuts these down, than the dirty oil they send down the pipeline will trigger yet more out-of-control warming,” said climate activist Bill McKibben, who helped lead huge protests in Washington, DC against the pipeline last fall.

Tar Sands Blockade has already successfully shut down Keystone XL construction for about two-and-a-half days in Livingston, Saltillo and Winnsboro.

“Today’s bold action by these eight brave people demonstrates their resolve to stop this dirty and dangerous pipeline. They understand the severity of the threat and that taking action is less risky than doing nothing,” said Ron Seifert, a spokesperson with Tar Sands Blockade. “We are defending our homes, our communities clean drinking water, our land rights and a stable, livable climate.”