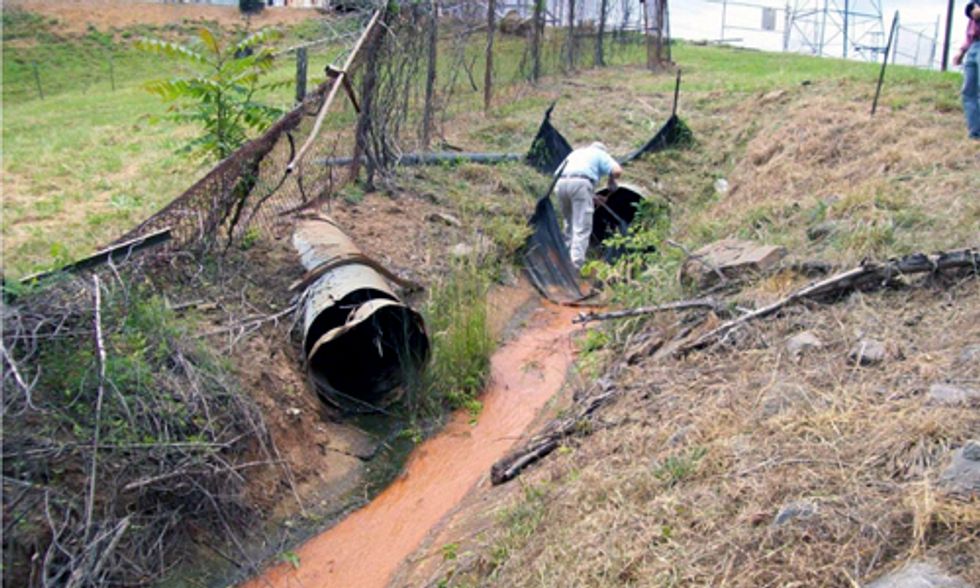 Yesterday afternoon, Duke Energy reported that it spilled between 50,000 to 82,000 tons of coal ash into the Dan River near Eden, NC. To put the volume in perspective, the spill is the equivalent of 413 to 677 rail cars of wet coal ash poured into a public drinking water source. The spill is located on a stretch of the Dan River between Eden, NC and Danville, VA. An estimated 22 million gallons of coal ash could already be in the Dan River moving downstream.

Equally disturbing is that neither Duke Energy nor any of the government regulators issued a press release and informed the public about this massive spill until 24 hours after it was discovered. If a freight train full of this toxic waste had derailed, there would have been immediate notification and quick news coverage in order to inform and protect the public. The delay in reporting this spill is inexcusable.

A security guard who noticed unusually low water in the ash pond at the shuttered coal plant led to the discovery of the spill. This means most of the water had escaped and contaminated the river before anyone at Duke noticed.

Upon investigation, Duke discovered that a 48-inch stormwater pipe underneath the unlined 27-acre, 155-million-gallon ash pond broke Sunday afternoon and drained tens of thousands of tons of coal ash and water into the Dan River.

How could they have missed such a large volume of waste spewing out of their ash pond? Especially since the town of Danville, VA withdraws drinking water just 6 miles downstream.

This coal ash spill appears to be the third-largest in U.S. history. In 2008, a billion gallons of ash slurry spilled at a Tennessee Valley Authority power plant in Tennessee.

In 2009, Duke Energy was warned by the Environmental Protection Agency (EPA) that its 53-year old Dan River ash pond dams were a high hazard. EPA inspections in September of 2009 found them leaking and sloughing sizable sections off the dam.

But that's not all the EPA inspectors found at the Dan River plant. They also found these mangled, dilapidated and poorly maintained storm water pipes with chain link fence falling down on top of them.

And some stumps in the ash pond dams where they are prone to rot and allow coal ash to leak:

Given this history at the site, should we be surprised that a trainload of waste suddenly cascaded through an old storm drain before anyone at Duke Energy even noticed?

Waterkeeper Alliance and our local Waterkeepers in North Carolina have filed legal action against Duke Energy over leaking coal ash ponds, which have been poisoning groundwater and surface water across the Tar Heel state for decades. The state of North Carolina then sued Duke over ash handling at all of its North Carolina coal plants.

While utilities in South Carolina have settled Waterkeeper lawsuits and started cleaning up their leaking ash ponds, Duke has refused to responsibly address their ongoing contamination of public water supplies. Now their epic failure to do the right thing for the integrity and safety of public water has reached an all-time low. If Duke would step up and close all their ash ponds, many downstream communities would be safer. Waterkeeper Alliance urges Duke to put the safety of the public and our waterways first.

The Dan River coal ash spill is the latest in a series of wake-up calls about this mounting public health and environmental crisis.

Visit EcoWatch's COAL and WATER pages for more related news on this topic.