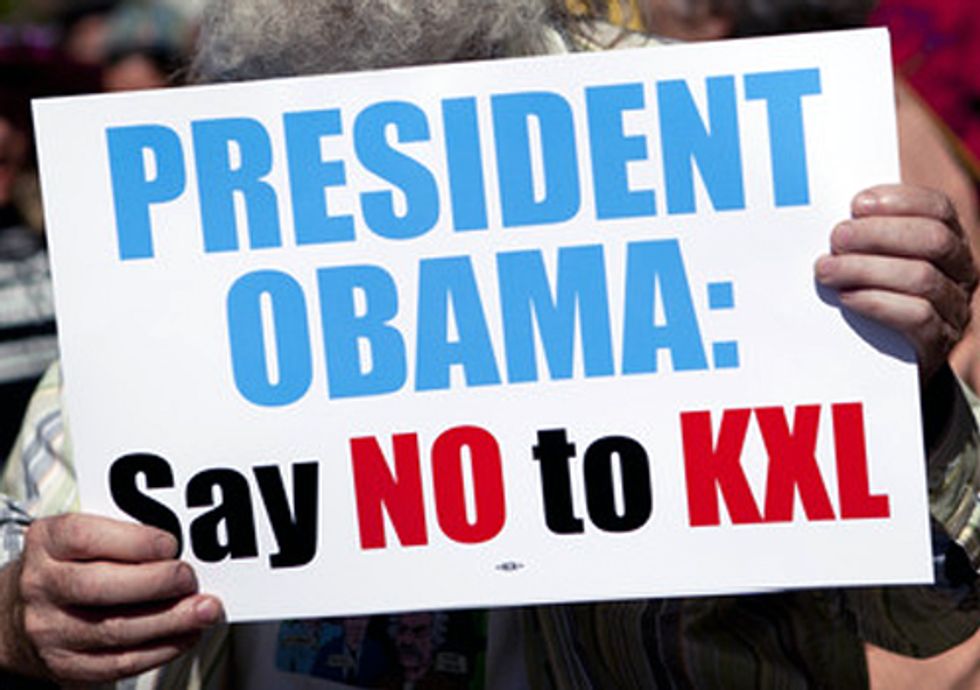 It all comes down to Barack Obama.

As I type this, Big Oil's representatives in the House and Senate are pushing legislation that would rush approval of the Keystone XL tar sands pipeline. Up until now, President Barack Obama has stood strong, threatening to reject any bill that includes the pipeline.

But in the last hour, some terrible news has begun to leak from Washington, D.C.—President Obama seems to be on the verge of caving on Keystone. There’s no way to sugarcoat it—if the president allows Keystone to move forward, he will be failing the single biggest environmental test of his presidency.

The next few hours will be absolutely crucial—the president needs to hear from you that cutting a back-room deal with Big Oil on Keystone XL is unacceptable. If he steps up and threatens to veto this bill, he can stop this pipeline in its tracks.

Or, during the weekend leave a short message for Obama on the White House website.

Feel free to say what you want on the call, but remember to drive this one message home—to keep his promises, President Obama needs to veto legislation that would rush approval of Keystone XL. This pipeline is a threat to our climate and jobs and needs to be stopped.

After you've called the White House, take 30 seconds to let us know how it went by clicking here.

(Don’t worry if you get a busy signal—it’s actually a good sign—it means we’ve flooded the White House switchboard and that the movement is sending an overwhelming message to the president. Just keep on trying until you get through.)

President Obama came into office promising to “end the tyranny of oil.” This is his chance to prove he was serious. If he’s not, he needs to know right now that there will be real consequences.

Big Oil cut a back-room deal with the dirtiest Members of Congress to attach this legislation to a must-pass tax cut bill. These kinds of deals exemplify the tyranny Big Oil exercises over our government, and underscores why the president needs to threaten a veto.

We have just a few hours to convince him to stand strong and veto any legislation to rush the Keystone pipeline. Can you make a call right now and tell him that we expect nothing less? Here’s the number again—202-456-1111

Your calls right now are absolutely crucial, and you should also be getting ready to get back into the streets in the days and weeks to come. We’re dusting off our plans to go to Obama 2012 offices and raise some ruckus. Call the White House, but also get in touch with your friends to start plotting your next steps locally.

Thanks to you, this fight isn’t over yet—not by a long shot.