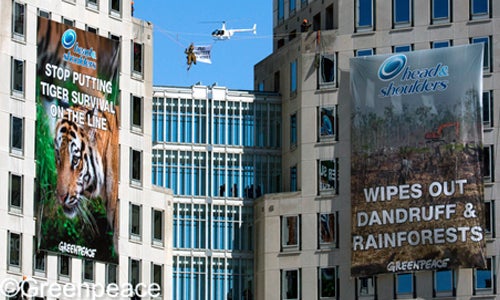 The naturally-occurring oil is typically extracted through widespread deforestation and has pushed exotic animals, like the orangutan and Sumatran tiger, to the brink of extinction.

The protesters, one dressed in a tiger costume while hanging from a zip line, hung the pair of 60-foot banners to call attention to these environmental concerns, and were consequently charged with burglary and vandalism by Cincinnati police, reports WCPO-TV.

P&G employees called 911 to report the protest with police responding just after 1 p.m.

Both banners were removed about an hour after the daredevil protestors had mounted them.

P&G officials later said in a statement the protest “ended peacefully” and the product giant’s key concern was “the safety of our employees, the security of our facilities and the safety of the protesters.”

“P&G is buying palm oil linked to rainforest destruction, to make everyday products like Head & Shoulders and Oil of Olay,” Greenpeace Palm Oil Campaigner Joao Talocchi said in a blog post. “Rainforest destruction is endangering species like the Sumatran tiger and orangutan. We should be able to wash away dandruff without wiping out tigers.”

P&G officials also stated they agree with Greenpeace and that “deforestation is a significant issue.” 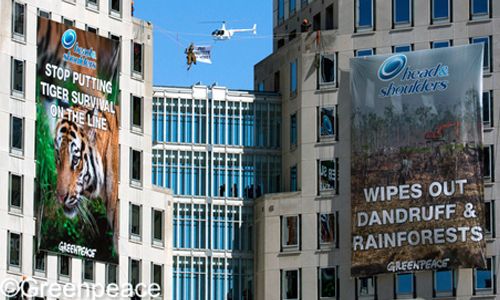 But, according to Talocchi, “The bottom line of all this is simple. Instead of ignoring the demands from thousands of people and trying to hide the facts, Procter & Gamble needs to address the issue as a serious company. It will only do that when it adopts and implements to a No Deforestation policy that goes beyond their commitment to buying palm oil that, while certified by the RSPO as sustainable, is still linked to the destruction of forests, including orangutan and tiger habitats.”