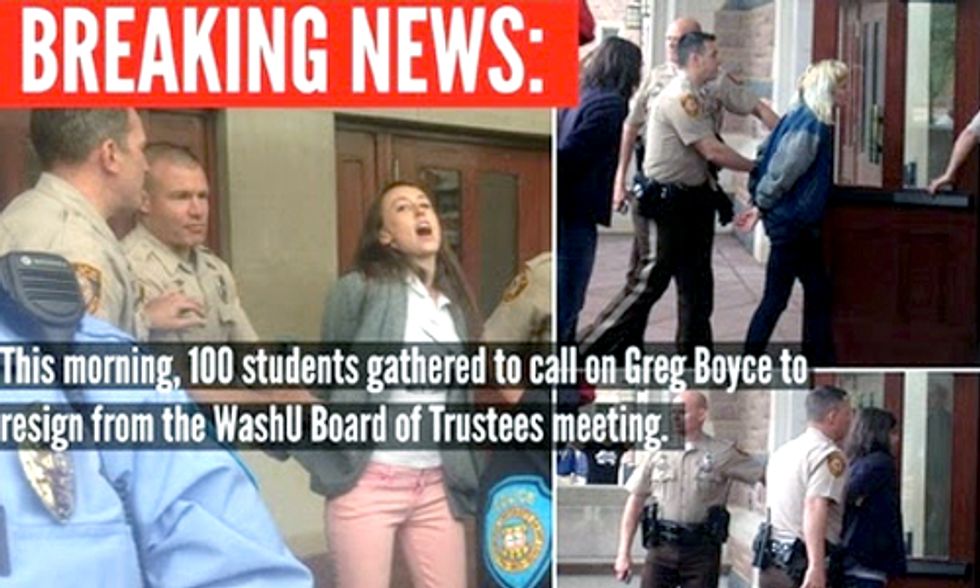 On the heels of an earlier arrest of a student at a growing divestment blockade at Harvard University, seven Washington University students were arrested today in St. Louis, as they sought to enter the quarterly meeting of the Board of Trustees.

Today's action followed a historic 17-day sit-in at the St. Louis campus, where hundreds of Washington University students have joined in a campaign to remove Peabody Energy CEO Greg Boyce from the Board of Trustees, as part of other demands to cut university ties with the coal industry giant.

World renowned author Margaret Atwood, appearing yesterday to accept the Arts First award at Harvard, summed it up best at an open forum when asked about the protest: "Any society where arrest is preferable to open dialog is a scary place."

According to Washington University student Caroline Burney, nearly 100 students rallied in front of the Knight Center, where the Board of Trustees meeting was being held, and then marched to the main doors of the building. Students were faced by a line of police, locked arms, and stated that they were not leaving until they were let into the building to speak with Greg Boyce about his role at the University and on the Board of Trustees. After about forty minutes of singing and chanting, seven students were arrested by St. Louis County Police

"I am proud to be standing up to Peabody Coal today," said Julia Ho, one of the students who was arrested. "For too long, fossil fuel corporations have used their partnerships with universities to legitimize their destructive and unjust business practices. That must stop. Students across the country are fighting back against the fossil fuel industry and will keep fighting back until until fossil fuels are off of our campuses."

"It's really obvious that Washington University is on the wrong side of history," said Dr. Bret Gustafson, an associate professor of sociocultural anthropology at Washington University. "On top of the concerns of coal, global warming, and the unethical practices of Peabody Coal, the student protests are also raising the issue of the corporate takeover of university spaces, and the threat to academic freedom. That was made visible today."

"Today's arrests are part of a larger fight against Peabody Coal in St. Louis, across the country, and around the world," said Caroline Burney, with Students Against Peabody Energy. "We're here for ourselves and for all of the other communities that Greg Boyce and Peabody Coal have destroyed, including including Rocky Branch, Illinois and Black Mesa, Arizona. Our fight will continue here in St. Louis at next week's Peabody shareholder's meeting and in Black Mesa at the end of May."

Added Gustafson, an alumni of Harvard University, where a similar divestment protest and blockade is underway, "It's amazing the administration is not willing to give an inch. But they're wrong if they think they can just arrest a few students and this will go away. This is the first wave of a rising tide, and just the beginning of a longer struggle."

In a press release, the Students Against Peabody Energy reiterated their charges against Boyce's role as Peabody representative on the Washington University Board of Trustees:

The students point to several of Peabody's recent actions as the impetus for their campaign. Peabody Coal is currently trying to take over a second community road for its mining operations in Rocky Branch, Illinois. Peabody lobbyists are also attempting to gut The Take Back St. Louis ballot initiative and local democratic processes by inserting amendments into two Missouri House bills that would ban cities or other municipalities from "by ballot measure impos[ing] any restriction on any public financial incentive authorized by statute." Peabody is also a key leader in the American Legislative Exchange Council (ALEC), which is currently meeting in Kansas City and facing large scale protests from unions and other progressive organizations.