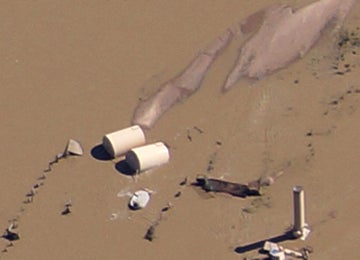 A damaged oil tank has dumped 5,250 gallons of oil into the South Platte River south of Milliken, CO, yesterday.

Gary Wockner of Clean Water Action said in a statement Wednesday night that the spill “exemplifies the danger” of drilling and fracking in floodplains.

“This state of Colorado and the U.S. Environmental Protection Agency must force Anadarko [the owner of the oil tank], to clean it up—no matter the cost—and make reparations to the public, including paying fines and enforcing the Clean Water Act which may include civil and criminal penalties,” said Wockner.

“In addition, the state must initiate new rules for drilling and fracking near rivers, streams and in floodplains that better protect the public and the environment.” 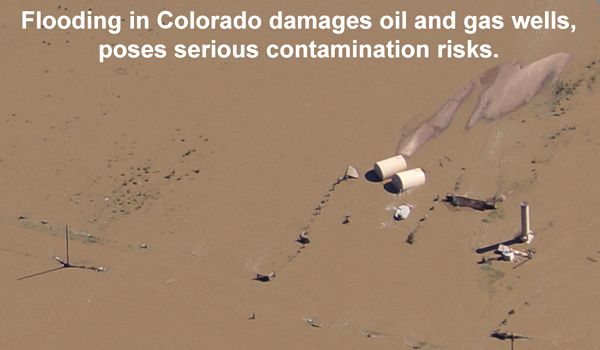 As reported on EcoWatch Tuesday, displaced condensate tanks near Greely and Kersey, CO, used to store waste liquid from drilling operations, have tipped over and are damaged from the severe flooding that has hit the region. Phillip Doe explained in his article that Colorado regulations do not require these tanks be secured to the ground. These tanks vary in size, but when full they contain between 12,000 and 20,000 gallons of liquid.

“I think when you look at a lot of the west, the west has become essentially an energy colony. The energy industry dictates orders to the governments in the west and people forget that Colorado is one of the biggest natural gas reserves in the entire world not just the U.S.,” said Sirota in the interview.

“You have got, as you showed, the breaking news of oil spills and major riverways. And, here’s the thing. This shows that what we are talking about here is not just a situation that affects one city or a couple of counties. The South Platte River, which you just mentioned, goes all the way out to Nebraska and goes all the way out and filters into the Ogallala Aquifer which serves much of the middle of the country.”

The Colorado Oil and Gas Conservation Commission said Anadarko Petroleum Corp. has oil-absorbing booms in the water north of the confluence of the St. Vrain and South Platte Rivers. According to The Denver Post, Anadarko, the second-largest operator in the Denver-Julesburg Basin, has shut about 10 percent of its operations—250 tank batteries and 670 wells. 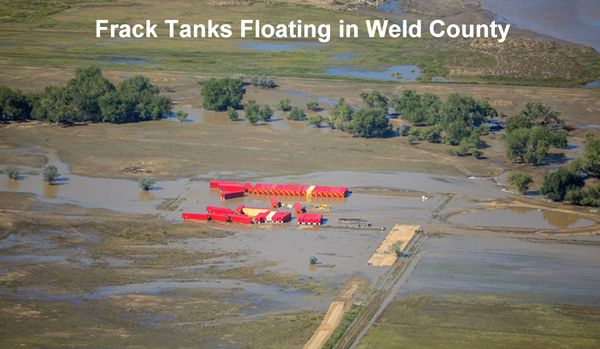