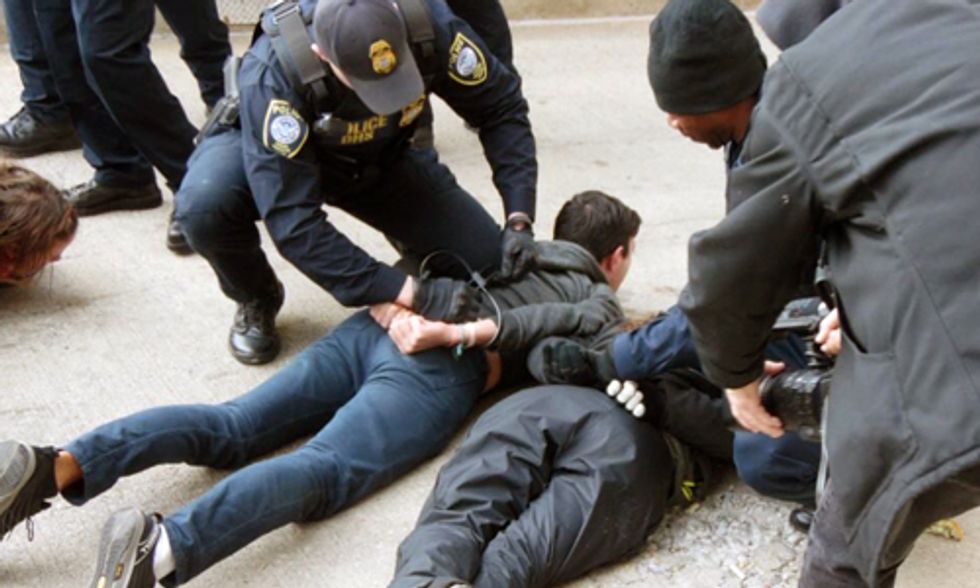 Nearly 100 people from across the country participated in a nonviolent direct action protest this morning shutting down the office of the Federal Energy Regulatory Commission (FERC) in Washington, DC. Today’s action was led by some of the Great March for Climate Action marchers who arrived at the nation's capital on Nov. 1 after a 3,000-mile cross country walk from Los Angeles, California to Washington, DC.

Twenty five people were arrested this morning protesting outside the FERC building in Washington, DC, including Michael Zambrano (shown above) who was part of the Great March for Climate Action. Photo credit: Popular Resistance ‏@PopResistance Twitter feed

"We walked 3,000 miles across the country and heard firsthand from families and communities the hardships they are facing due to extreme energy extraction," said Faith Meckley, one of the climate marchers who lives in New York state.

Meckley said she's participating in these actions because FERC rubber stamped a methane gas storage facility on the shore of New York’s Seneca Lake that allows methane storage in unstable salt caverns that threatens her community.

Other people who took part in today's action said they have had enough of FERC rubber stamping fracking infrastructure projects in their communities, including pipelines, gas storage under lakes, compressor stations and fracked gas export facilities.

Today's action used a massive portrait of families from Maryland and New York whose homes and communities are threatened by fracking infrastructure that has been approved by FERC. A model town was erected as part of the action which blocked the entrance to FERC preventing employees from entering the building.

"The object of the blockade art is to give FERC no other option but to destroy the town and families in order to get to work," said Kim Fraczek of Sane Energy Project of New York. "The destruction of the art serves a metaphor of reality."

More than 50 organizations have endorsed this week of action and support the following demands in the face of "ongoing threats to their health, communities, democracy, property values, environment and climate:"

2.  We demand that all future FERC permits:

• Consider as the top priority the rights of human beings and all life on Earth;

• Fully assess the cumulative harm from infrastructure projects on public health, local economies and the climate. FERC must consider the damage from fracking--the extreme extraction process that generates the gas for these projects--and from climate change. FERC must reject industry's practice of disguising major projects by dividing them into separate, ostensibly unrelated ones.

• Adhere to the precautionary principle: in the face of uncertainty and the absence of scientific consensus, the benefit of the doubt will go to public health and the environment. The burden of proof that a project is safe falls with those proposing the project; communities will not need to prove that a project is harmful.

3. We demand that FERC commissioners meet with communities affected by approved and proposed fossil fuel infrastructure, including the Cove Point export facility, Myersville and Minisink compressor stations, and Seneca Lake gas storage project. This is a key step in changing FERC from an agency that protects only the interests of the fossil fuel industry to one that protects the public interest.

4. We demand a Congressional investigation into FERC's rubber stamping of industry proposals.

Organizers say actions against FERC are planned to continue throughout the week in order to demonstrate that FERC's actions are "incompatible with all that sustains life on Earth, including our climate system and clean water, air and land."