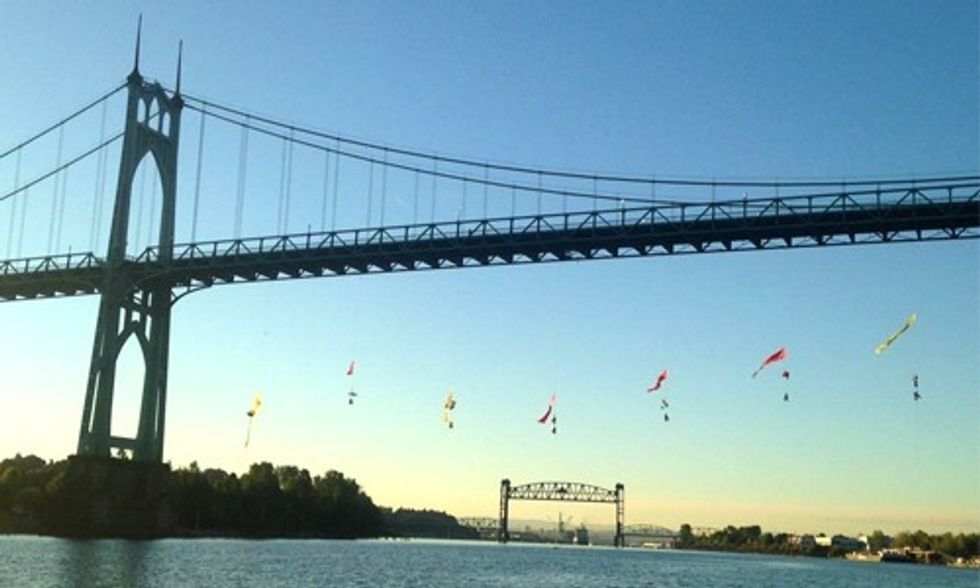 Shell Oil's vessel, the Fennica, turned around today after being blocked by activists hanging from the St. John's Bridge in Portland, Oregon. Thirteen Greenpeace activists remain suspended below the bridge to block Shell's ice breaker from leaving the Portland port headed for the Arctic Ocean where the company plans to drill for oil. Greenpeace has been stationed on the bridge for more than 30 hours, and plans to stay put for the time being. The organization is urging President Obama to use his last chance to stop Shell’s Arctic oil drilling plans. The images streaming in from the event are stunning.

Greenpeace wants to prevent the vessel from leaving the port because it's "one of two primary icebreakers in Shell’s drilling fleet, and is equipped with a capping stack, which Shell is federally required to have on site in the Chukchi Sea," says Greenpeace. "Until the MSV Fennica and the capping stack are on site in Alaska and Shell is granted federal drilling permits, the company can only drill top wells, thousands of feet above any projected oil." Kristina Flores, a Greenpeace activist live-streamed the event via Periscope from the bridge. She is acting as one of the 13 "anchor supports" for the 13 activists suspended from the bridge below.

Feeling victorious! The Fennica turned around and headed back to the port. Another successful day of blockading! #shellno arctic drilling!! — Kristina N. Flores (@KristinaNFlores) July 30, 2015

Supporters on land are cheering as the #Fennica turns around. This fight is not over, and our activists are not going anywhere! #ShellNo

“The activists went to sleep last night prepared for this moment, and they were in incredible spirits hearing the support from local Portlanders below and from people around the world," said Cassady Sharp, Greenpeace USA media officer. "The one person they really hope is listening is President Obama. There has never been a better time for our president to do the right thing and cancel Shell’s lease to drill in the Arctic." Read page 1

The police and coast guard have been repeatedly broadcasting this message to the activists on the bridge: "You are unwelcome and are trespassing. You are violating the safety zone set by the coast guard as well as a federal court injunction against Greenpeace and those acting with it prohibiting your current action. You must immediately depart from this area."

One activist shouted "Shell No" every time the message was broadcast. The police informed Flores and other Greenpeace activists that if they did not leave the area, they faced arrest, but the activists remained put. “These brave activists have done what hundreds of thousands of Americans have called on President Obama to do: stop Shell from drilling in the Arctic," said Dan, Ritzman, director of Sierra Club's Arctic campaign.

"The actions taken by those suspended from the bridge and paddling in the water are just the beginning of the ‘Shell No’ movement. We expect more reckless attempts by Shell to persist with their risky drilling plans, even as the effects of climate change are already felt throughout the Arctic. The region must remain untouched from the dangers of drilling. That’s why there are 13 protesters suspended from the St John's Bridge and dozens of ‘kayaktivists’ in the water, and it’s why over 1,500 people gathered last night to declare that they stand with them. President Obama must listen to science, common sense and the American people and say ‘Shell No’ to drilling in the Arctic," Ritzman said.