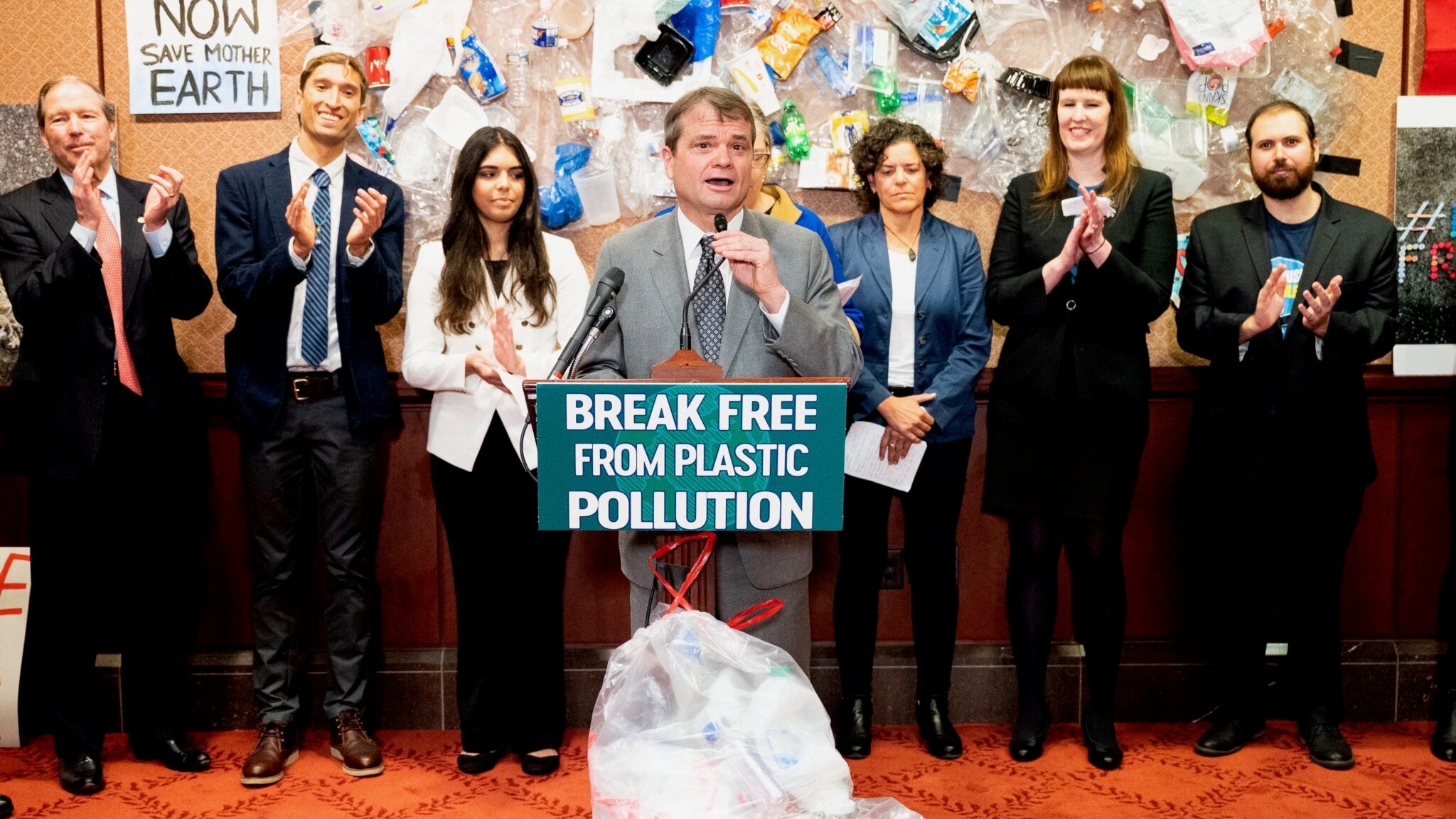 The world is in the midst of a plastic pollution crisis, and the current U.S. waste management system is not dealing with it effectively. Only eight percent of plastic waste in the U.S. is actually recycled. The rest is incinerated, landfilled or shipped overseas to countries even less equipped to process it, where it risks joining the eight million metric tons of plastic that end up in the world’s oceans every year.

That’s why Sen. Tom Udall (D-N.M.) and Rep. Alan Lowenthal (D-Calif.) introduced the Break Free From Plastic Pollution Act of 2020 Tuesday, a comprehensive piece of legislation that is being hailed as a first-of-its-kind attempt to address the root causes of the crisis on the national level.

“Our bill is a game-changer—the first bill to comprehensively tackle the plastic crisis,” Udall said in a press call Monday.

The bill has several ground-breaking components.

Lowenthal said he and Udall had been working on crafting the legislation for about a year.

“First and foremost, the Break Free from Plastic Pollution Act removes the burden of waste collection and recycling from the cities, from states, and, most importantly, from taxpayers, and puts it where it belongs: on the producers and the companies putting out these unsustainable products into the marketplace,” Lowenthal said in Monday’s press call.

After decades of treating our land, waterways, and oceans as plastic waste dumping grounds, we now face a global crisis. Our legislation applies one of the core principles of environmental law: ‘the polluter pays.’ https://t.co/KgBRhsw3Vk

This distinguishes it from previous legislative attempts to deal with plastic waste, such as the Save Our Seas 2.0 Act, which passed the Senate in January. That act focuses more on plastic already in the environment and puts the onus for recycling and cleanup on the government, rather than on producers.

The new bill has won widespread approval from environmental groups, many of whom worked with Udall and Lowenthal’s offices to develop it.

“It’s high time for companies to do more than just say they will recycle. Plastic pollution has become one of the greatest threats to our oceans. This bill would finally tackle the plastic crisis at its source by reducing the amount produced in the first place, and encouraging a shift to refillable and reusable alternatives,” Oceana chief policy officer Jacqueline Savitz said in a statement emailed to EcoWatch. “We need to turn off the faucet, not just run for the mop.”

Yvette Arellano, policy and research grassroots advocate at Texas Environmental Justice Advocacy Services, praised the bill for its attention to the health impacts of plants that convert fossil fuels to plastics, which especially impact low-income communities of color in Texas and along the Gulf Coast.

“I really want to thank the Senator and the Representative for this, not ambitious, but common sense piece inside of this act. It’s very meaningful for us to maintain that human health is being impacted in our most vulnerable communities,” she said during the press call.

“It’s a link we rarely see being made,” she added.

With its pause on new plastics plants and its shift of responsibility to producers, one might expect the new bill to meet resistance from the plastics industry. But the bill’s sponsors and supporters do not expect this to stymie their efforts.

Udall said he and Lowenthal had spoken with industry actors while writing the bill, and incorporated some of their ideas.

Scott Cassel, founder and chief executive officer of the Product Stewardship Institute, said in a press call that he had worked with the plastics industry for 20 years.

“Producers have a pattern of how they will oppose things in the beginning and then will come to the table,” he said.

He added that attempts to deal with the plastic pollution issue on the state and local level had led to a regulatory patchwork that created a “headache” for producers, meaning there might be an appetite for the comprehensive national approach proposed by the new bill.