An increase in the number of licenses for Brazilian beef exporters is a worrying sign that illegal deforestation could rise in some of the most vulnerable parts of the Amazon, according to a new report by the non-profit environmental investigations outfit Earthsight.

The organization said some slaughterhouses were granted new sanitary permits in states containing Brazil’s worst illegal deforestation. The permits allow the slaughterhouses to export beef to the United States if they meet certain sanitary regulations yet disregards whether cattle are sourced from illegally cleared land.

“As beef exports from Amazon states grow,” the report said, “and more slaughterhouses in the region receive sanitary permits to sell to the American market, it is urgent that U.S. importers are mandated to monitor their supply chains for environmental abuses.”

The U.S. banned beef imports from Brazil in 2018 but reversed the measure in February 2020. Since then, exports to the U.S. have been climbing to pre-ban levels as the Department of Agriculture approves more permits for slaughterhouses.

The report highlighted one facility in the municipality of Chupinguaia, in Rondônia state, where deforestation rates have risen from 435 km2 (168 mi2) to over 1,000 km2 (368 mi2) over the last decade, much of it due to cattle ranching, the report said. The facility is owned by Marfrig, one of the largest beef producers in the world.

Last year, Mongabay reported that Marfrig was associated with illegal deforestation in the Amazon yet received financial backing from Blackrock, one of the world’s largest asset managers.

There are 34 facilities licensed for export to the U.S., Earthsight noted, and almost 20% of them are located in the Amazon.

“Our argument is that it’s very hard for U.S. importers to monitor this beef to make sure it’s not linked to illegal deforestation or other illegal practices,” said Rubens Carvalho, one of the authors of the Earthsight report. He added that because places like Rondônia are so complex, it is extremely risky to purchase from there at all.

Adding to the concern is the recent decision by Rondônia lawmakers to rush a bill through the state legislature that reduces the Jaci Paraná Extractive Reserve by 171,000 hectares (422,550 acres). The report points out that almost half of the lawmakers in Rondônia’s congress are connected to the cattle ranching industry. 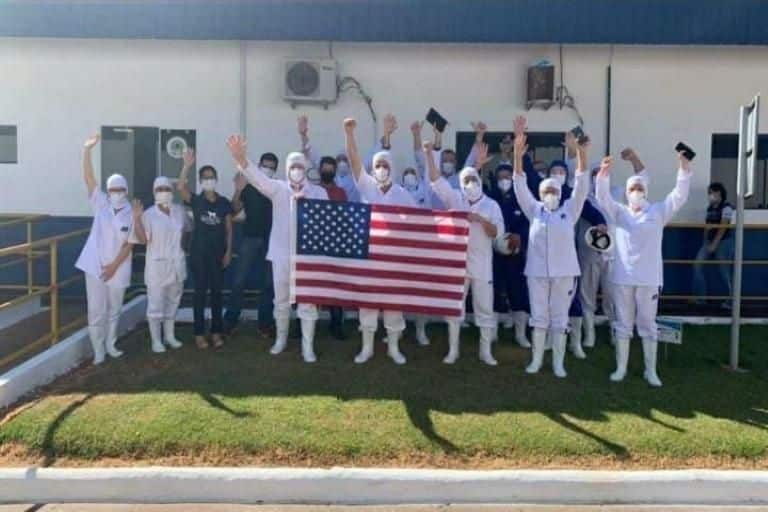 Employees at Marfrig pose for a photo after hearing news of their slaughterhouse’s new sanitary license. Via Marfrig Facebook page

There is hope that a bill in the U.S. Congress will implement more robust import regulations for the international cattle industry. However, the inherent difficulties involved in monitoring indirect suppliers could call into question the effectiveness of the regulations.

“Laws that impose conditions or prohibit the sale of beef from areas that are illegally deforested are generally a good thing,” said Adriana Abdenur of Plataforma CIPÓ, a climate, governance and peacebuilding think tank in Latin America. “Obviously, they’re not sufficient because we know, for instance, that there is a lot of ‘cattle washing’ going on in the Amazon.”

Abdenur added that regulations would only be effective in conjunction with greater transparency by Brazilian companies and Brazilian and US law enforcement collaboration.

Earthsight, for its part, called on lawmakers to ensure that the legislation is ambitious in its scope, with truly dissuasive penalties:
“(Importers) must be required to demonstrate that their goods are clean, rather than U.S. authorities being expected to prove beyond doubt that a specific shipment is dirty.”