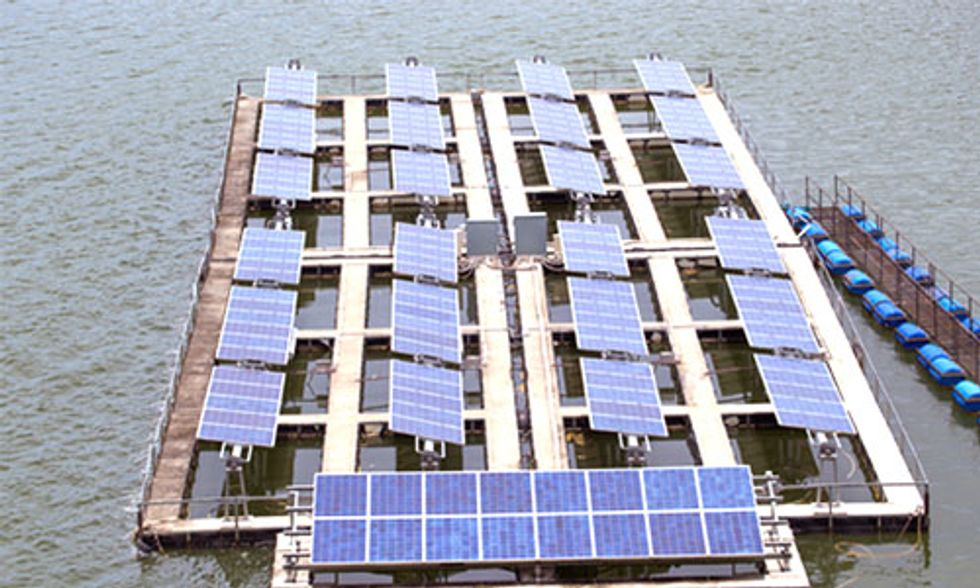 With Brazil's historic drought drying up its hydroelectric plants, the South American country is turning to solar power to help relieve its foreboding energy crisis.

The nation announced that within four months, it will commence pilot tests of a gigantic floating solar farm located atop the Balbina hydroelectric plant in the Amazon. It's currently unclear how physically large the floating farm will be, but the enormous reservoir it will sit on covers 2,360 square kilometers.

At 350 megawatts, Brazil's ambitious project would easily trump Japan's currently largest 13.4 megawatt floating solar power plant in terms of power output. To put that in another perspective, the largest solar farm in the world is the 550 megawatt Desert Sunlight Solar Farm in California.

Diversifying energy sources is clearly a necessity for the notoriously parched country. Brazil is experiencing its worst drought in four decades, causing electricity blackouts in many regions. Below-average rainfall in the last few years have depleted its reservoirs, thus gutting its formerly plentiful supply of hydropower, which supplies more than three-quarters of the country's electricity, according to the U.S. Energy Information Administration.

As Climate News Network reported, "the reservoirs in the drought-affected region could fall to as little as 10 percent of their capacity, which ... Mines and Energy Minister Eduardo Braga admits would be 'catastrophic' for energy security."

While the sunny country has tremendous potential for solar power, Brazil has been slow to embrace this form of renewable energy. It was only in October 2014, when Brazil made its first foray into this sector with the construction of 31 solar parks, its first large-scale solar project with a combined capacity of 1,048 megawatts.

A shift to solar energy might be fitting, as the Balbina Dam (where the proposed solar farm will eventually sit) has been criticized for emitting more greenhouse gases than a coal-fired power plant.

"We are preparing ourselves to win the challenge in 2015 and be able to deliver a model and an electric system starting in 2016 which will be cheaper, more secure and with greater technological innovation," Braga said. Electricity produced at the farm is expected to cost between $69 and $77 per megawatt hour, reports say.

Gloom Does Not Have to Mean Doom for California's Epic Drought