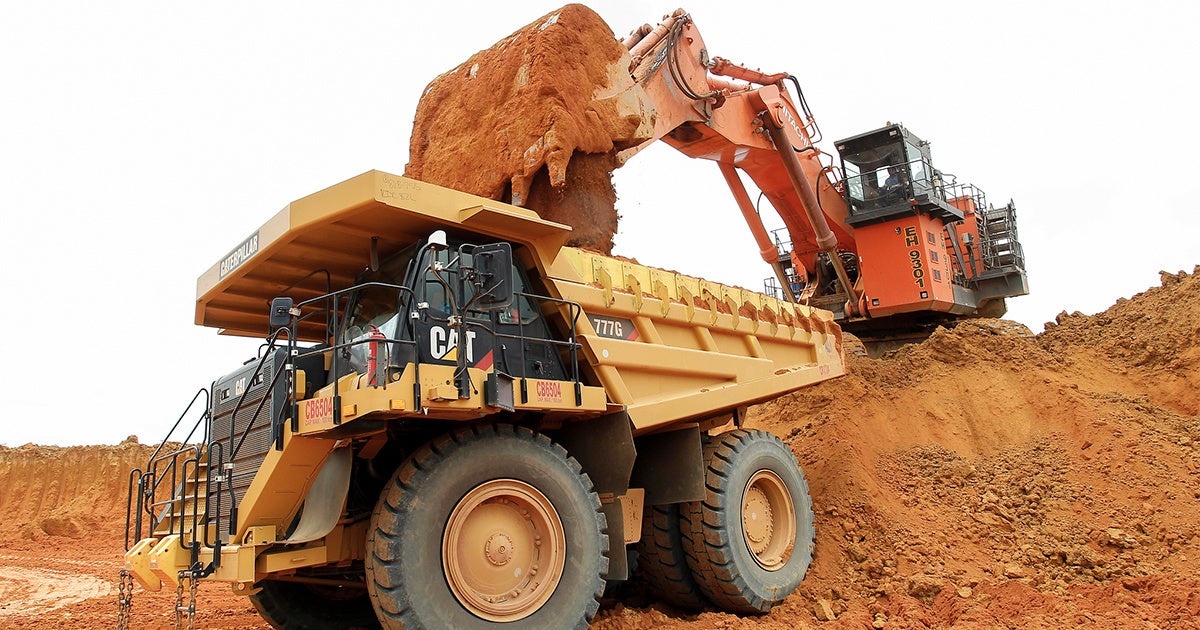 By Sue Branford and Maurício Torres

For many years, international and Brazilian mining companies have dreamed of getting access to the mineral wealth lying beneath indigenous lands. And finally, the government of Jair Bolsonaro seems determined to give them that opportunity. On March 4, while Brazilians were distracted by Carnival celebrations, the new Minister of Mines and Energy Admiral Bento Albuquerque announced plans to permit mining on indigenous land.

Speaking at the annual convention of the Prospectors & Developers Association of Canada (PDAC), a major event in the mining world that attracts tens-of-thousands of attendees, the Minister said that Brazil’s indigenous people would be given a voice but not a veto in the matter. The opening of indigenous ancestral territories to mining, he predicted, would “bring benefits to these communities and to the country.”

He also said that he intends to allow mining right up to Brazil’s borders, abolishing the current 150-kilometer (93-mile) wide mining buffer zone at the frontier.

The minister said that current mining restrictions are outdated. The long-restricted indigenous and border areas “have become centers of conflict and illegal activities, that in no way contribute to sustainable development or to sovereignty and national security.” The administration will shortly be holding a nationwide consultation to discuss how the changes should be made, he concluded.

He also said that he intends to allow mining right up to Brazil’s borders, abolishing the current 150-kilometer (93-mile) wide mining buffer zone at the frontier.

The minister said that current mining restrictions are outdated. The long-restricted indigenous and border areas “have become centers of conflict and illegal activities, that in no way contribute to sustainable development or to sovereignty and national security.” The administration will shortly be holding a nationwide consultation to discuss how the changes should be made, he concluded. 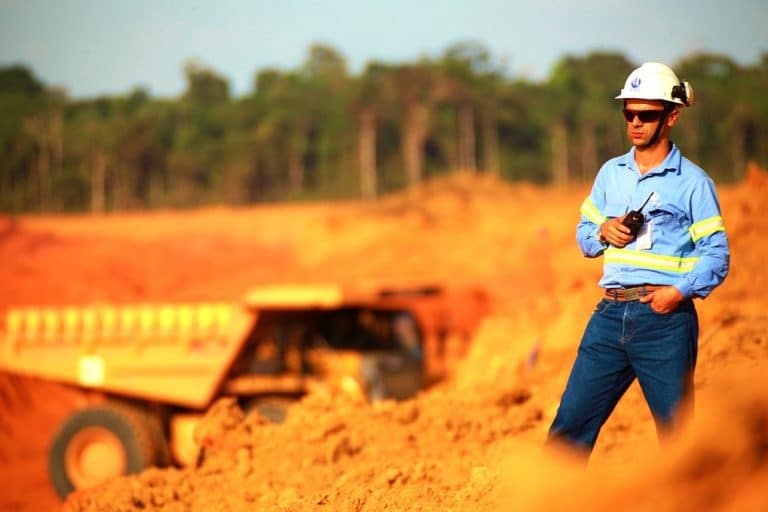 An industrial mining operation in Brazil. Note the forest at the edge of the open pit mine.

The minister’s announcement was not unexpected. President Jair Bolsonaro, an ex-army captain, has said that he admires the 1964-85 military dictatorship, and some are drawing parallels between Bolsonaro’s policies and theirs regarding indigenous and quilombola communities.

Bolsonaro recently wrote on Twitter: “Over 15 percent of national territory is demarcated as indigenous and quilombola land. Less than a million people live in these isolated areas, exploited and manipulated by NGOs. We are going to integrate these citizens.”

Back in 1976, Maurício Rangel Reis, interior minister in the military government of General Ernesto Geisel, expressed harsh views toward indigenous peoples: “We plan to reduce the number of Indians from 220,000 to 20,000 in ten years,” he declared. But the military didn’t achieve this goal. Far from being eliminated, Brazil’s indigenous numbers increased to their current 900,000 population.

Indigenous groups achieved real gains after the military government passed into history, and its dictatorial rule was supplanted by the progressive 1988 Brazilian constitution, which brought two important innovations. It abandoned the goal of assimilating indigenous people into the dominant culture (a goal Bolsonaro wants to reinstate), and it affirmed the concept of “original rights,” recognizing indigenous peoples as Brazil’s first inhabitants, with the right to remain on ancestral lands.

Article 231 of the Constitution states: “Indians have the right to the permanent occupation of their traditional land and to enjoy the exclusive use of the wealth in the soil, rivers and lakes.” Moreover, their land rights are “inalienable.” The Constitution allows for mining on indigenous land, but only after the Indians have been consulted and specific procedures for doing so, approved by them, have been ratified by Congress. 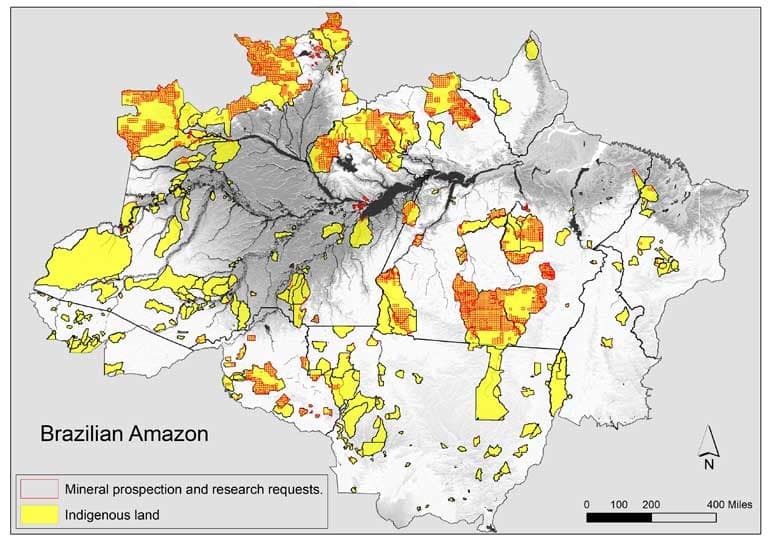 Mining industry and individual prospecting requests on indigenous land as filed with the federal government.

Admiral Albuquerque’s recent announcement provided no clue as to how the Bolsonaro government could legally give indigenous groups a voice but no veto regarding use of their lands, while somehow staying within the letter of constitutional law.

The Ministry of Mines and Energy has, however, confirmed to Mongabay that it plans to authorize mining on indigenous areas. Though, as to the legal mechanisms for doing so, it would only say that “the specific regulatory model will be discussed with Congress and other involved parties.” Though its reports are unconfirmed, analysts suggest Bolsonaro will probably issue a presidential decree to allow mining, which is the approach he plans to use to permit agribusiness to lease land within indigenous reserves ­— a move that faces a similar constitutional roadblock.

If it goes forward with these presidential decrees, the administration will very likely face opposition from powerful figures in the judiciary, including the country’s top prosecutor. Speaking at a conference attended by representatives of some of Brazil’s 305 indigenous tribes, advocacy groups and a dozen European nations, Prosecutor General Raquel Dodge noted that indigenous land rights are guaranteed in Brazil’s Constitution and warned: “There can be no backsliding on public policies toward the indigenous people.”

The Amazonas branch of the Federal Public Ministry (MPF), an independent group of federal and state litigators, is so concerned at Bolsonaro’s mining plan that in February it went to court to ask the National Mining Agency (Agência Nacional de Mineração, ANM), the federal body that administers the mining sector, to turn down all requests by international and Brazilian mining companies to prospect or mine on indigenous land. 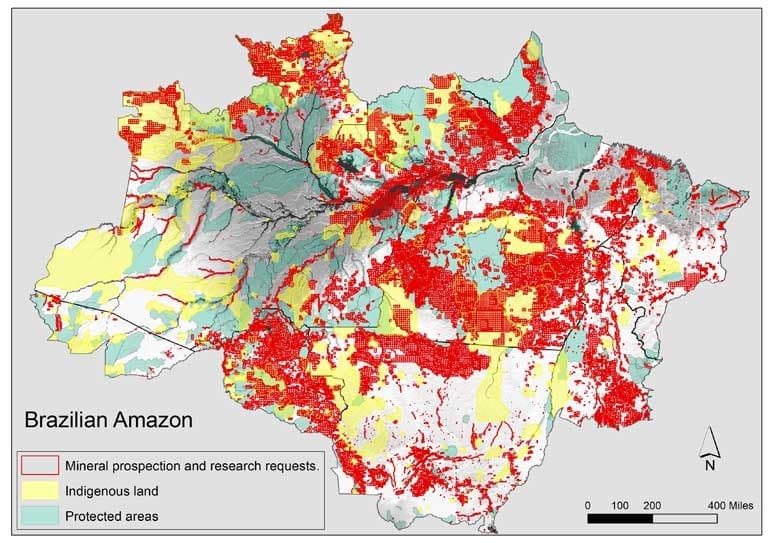 The mining industry has not only made prospecting requests (red) within indigenous reserves (yellow), but also on other conserved lands (green).

According to the MPF, mining companies and individuals have altogether lodged 4,073 requests with the ANM for mining-related activities on indigenous land since 1969, seemingly in preparation for an eventual land rush. The companies say that they are only registering their interest, but MPF argues that, until the required constitutional amendments have been written and approved by Congress, such requests should not even be permitted.

Brazil’s indigenous peoples have clearly indicated that if the mining plan goes forward they will fight back. Most don’t want mining on their land. Munduruku female warrior Maria Leuza Munduruku told Mongabay: “We’ve had a lot of outsiders coming onto our land to mine. Many fish disappear and the ones that remain we can’t eat, as they’re dirty.”

Joenia Wapichana, Brazil’s only indigenous female federal deputy, said that Indians don’t want the money mining might bring in: “For us indigenous people wealth is having health, land to live on without receiving threats, a stable climate, demarcated land, a preserved culture and respect for our community.” Brazil’s mining environmental and safety record is marred by frequent waterway contamination and land pollution, and includes two deadly tailings dam collapses in the past three years,

Davi Kopenawa Yanomami, one of Brazil’s best-known indigenous leaders, says that large-scale mining by big companies is particularly harmful: “This kind of mining requires roads to transport the mineral, large areas to store production, big dormitories where workers can sleep,” he said. “It will transform our forest.” A 2017 study found that mining and its auxiliary activities caused 10 percent of deforestation in the Brazilian Amazon between 2005 and 2015. How much Amazon deforestation might skyrocket if indigenous reserves are opened to mining now is anyone’s guess; indigenous groups are currently the Amazon’s best land stewards. 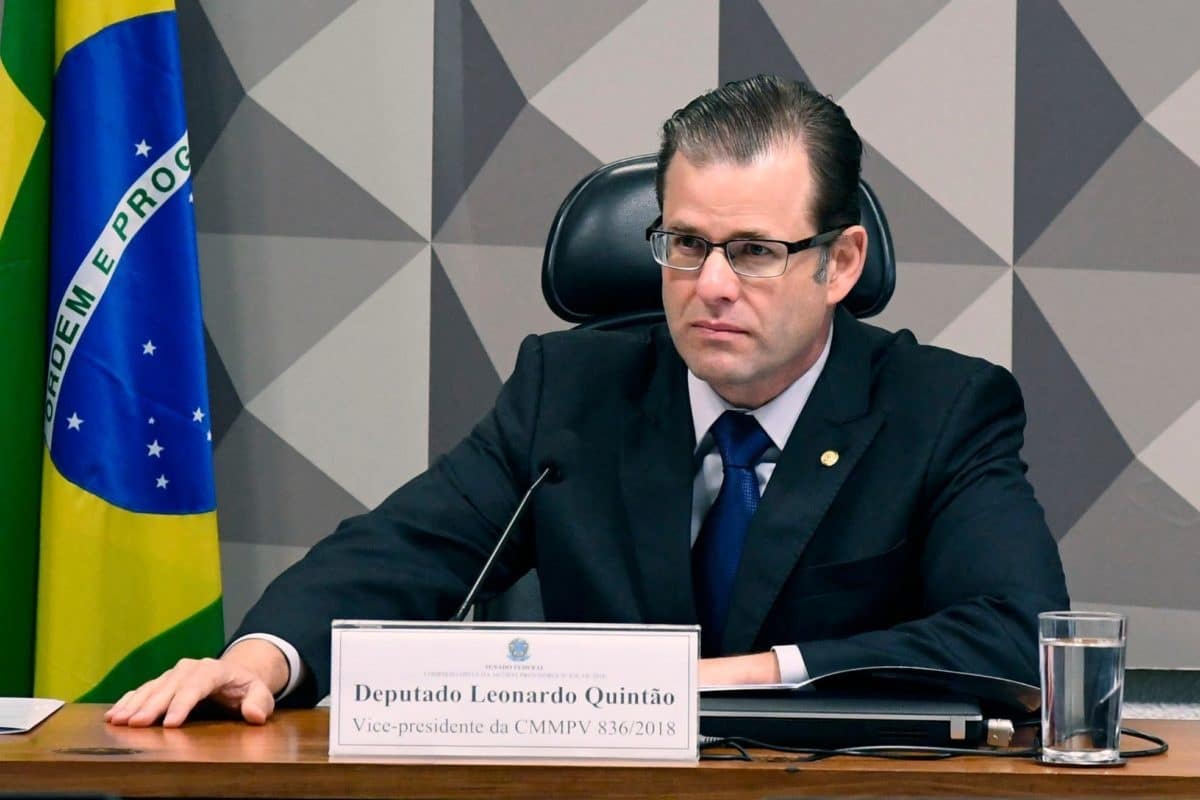 Mining Companies in the Driver’s Seat

After last year’s election, the pro-mining lobby in Congress, known by some as the “mud lobby,” is stronger than ever.

Their main spokesperson, federal deputy Leonardo Quintão, is a member of Bolsonaro’s Civil Office. He openly admits to receiving money from mining companies: “I am a parliamentarian legally financed by mining companies,” he said. Quintão was the first rapporteur for Brazil’s new Mining Code, presented to the National Congress in 2013, which mining companies helped him formulate. He is proud of his work: “Our Code is modern … outlawing all kind of speculation in the mining sector.”

But others complain of Congress’s failure to talk to potentially impacted communities when planning the new code. According to anthropologist Maria Júlia Zanon, who coordinates the Movement for Popular Sovereignty in Mining (Movimento pela Soberania Popular na Mineração), “The companies’ economic interests, evident in the elections, help explain the lack of democracy in the [congressional approval] process.”

As of now, the new Mining Code has yet to be signed into law, and the horrific Vale mining disaster in Brumadinho this January, with 193 people dead and another 115 missing, might further delay approval. Andréa Zhouri, at the University of Minas Gerais, said the disaster stemmed from “politico-institutional failures,” particularly a lack in regular monitoring of hazardous mining operations. “The [value of] ore is above everything and everyone,” Zhouri said.

There has been little indication so far that the government intends to significantly toughen environmental controls in the new Code. Some fear that, once the Brumadinho hue and cry dies down, it will be business as usual and the Mining Code will be approved. Prosecutor Guilherme de Sá Meneghin, who led the investigation into the earlier Mariana mining disaster, said: “What we clearly see is that Brazil doesn’t learn the lessons of history.”

Today, mining companies chomp at the bit, having registered many prospecting requests within indigenous reserves. Minister Albuquerque — an admiral with a long, illustrious military career, and known for getting what he wants — has signaled readiness to help those firms translate their plans into action. However, Brazil’s indigenous people, with a history of batting away threats, often against bad odds, are ready to fiercely resist. The lines are drawn for battle, likely in the courts, and potentially all across Brazil. 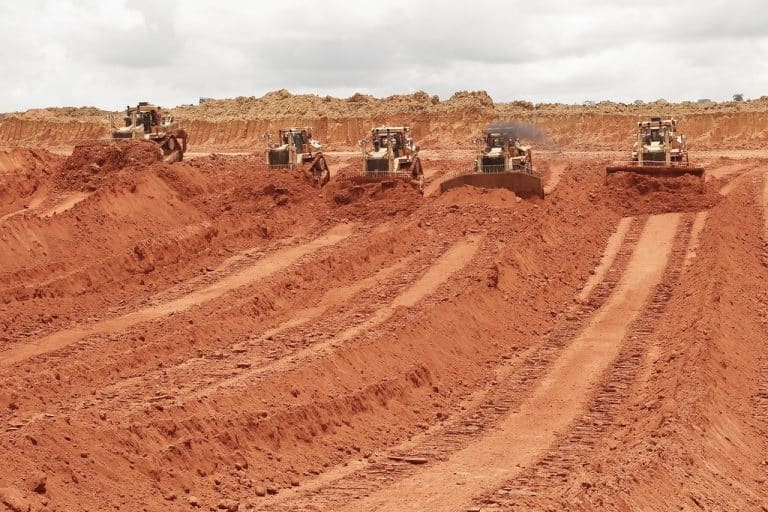 Forest and topsoil must first be removed before ore can be accessed at Brazil’s Norsk Hydro ASA Paragominas open pit mine. Such industrial processes would be highly destructive of Brazil’s forests, indigenous reserves and cultures.