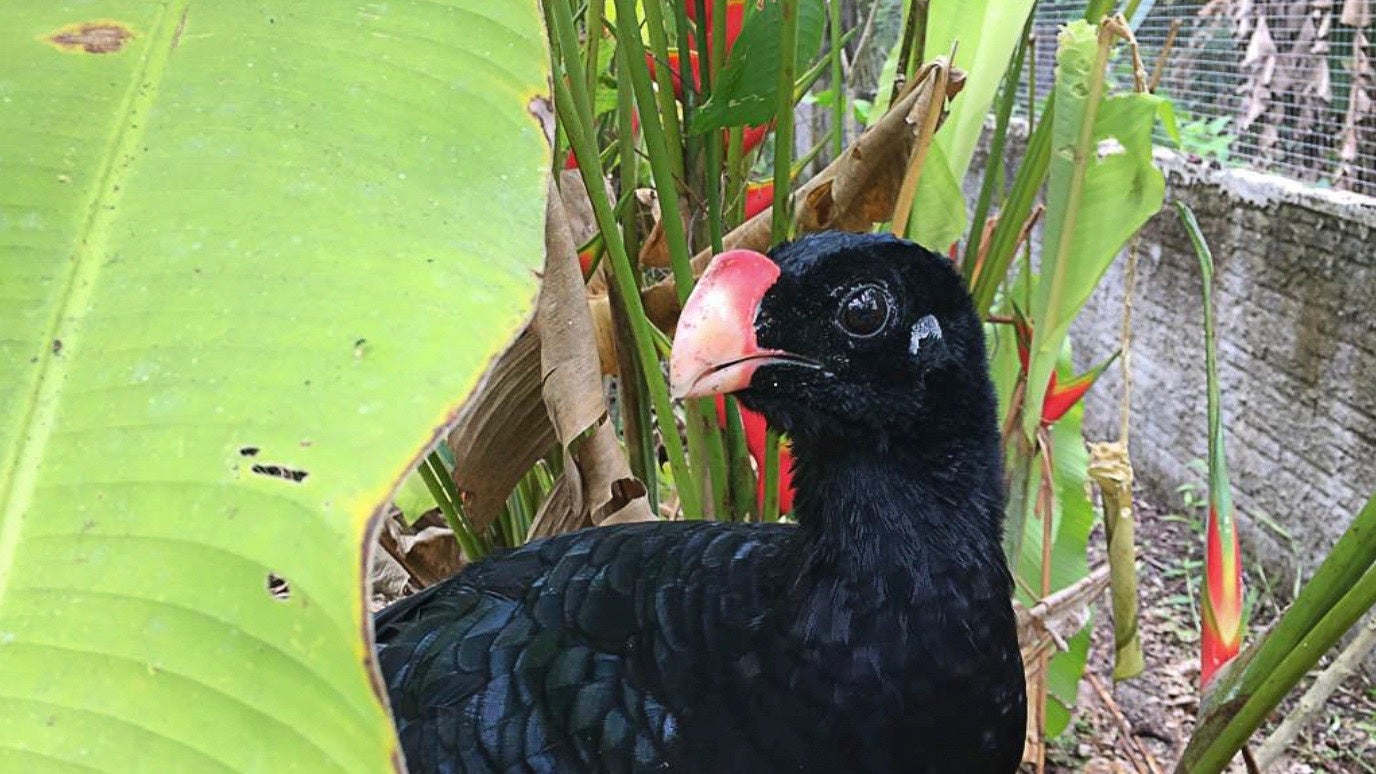 Extinct in its habitat for at least three decades, the Alagoas curassow (Pauxi mitu) is now back in the jungle and facing a test of survival, thanks to the joint efforts of more than a dozen institutions to pull this pheasant-like bird back from the brink.

Three pairs of curassows were reintroduced a month and a half ago in a 980-hectare (2,400-acre) area of the Atlantic Forest in the Brazilian state of Alagoas. Researchers are keeping tabs on them remotely, via GPS tags, to see whether they can find food and shelter, reproduce, and stay safe from predators on their own.

The bird is the first case of the reintroduction of an animal declared extinct in the wild in Latin America, and one of just a handful in the world. According to Luís Fábio Silveira, curator of the ornithological collection at the Museum of Zoology of the University of São Paulo, there are “very few similar cases” in the world. Success stories include the California condor (Gymnogyps californianus), the Hawaiian crow (Corvus hawaiiensis), the black-footed ferret or American polecat (Mustela nigripes), and the Mauritius kestrel (Falco punctatus).

The journey that led to the Alagoas curassow’s resurrection started four decades ago, thanks to the obstinacy of Pedro Nardelli, a businessman who kept a scientific bird-breeding facility in Nilópolis, in the state of Rio de Janeiro. In 1979, he traveled to the metropolitan region of Maceió, in Alagoas state, looking for specimens of the curassow, a red-billed, black-bodied, fowl-like bird. Described for the first time in the 17th century by the German naturalist George Marcgraf — who included a mention of its culinary use, one of the factors behind its eventual extinction in the wild — the species was very rarely seen in its original territory, a small area of Atlantic Forest between the states of Alagoas and Pernambuco. Besides the hunting, the bird was also threatened by the advance of sugarcane plantations in the region.

The five curassows that Nardelli was able to rescue were captured in a forest area that, ironically enough, would give way to a new sugar and ethanol plant, thanks to the accelerated pace of deforestation imposed by Proálcool, a national program aimed at stimulating sugarcane ethanol production. “If Nardelli had arrived two years later, there would be no more [curassows],” said civil engineer Fernando Pinto, who worked at the ethanol plant at the time and later became the breeder’s main partner in the rescue mission. “Destiny called.”

A pair of Alagoas curassow at the moment of release, after leaving the acclimatization aviary. Clarice Maia / Agência Alagoas / Mongabay

Back in Rio de Janeiro, Nardelli managed to get one of the male curassows and two of the females to reproduce. The trio would spawn the sole lineage responsible for passing on the species’ DNA. Pinto began traveling to Rio de Janeiro more frequently. “We spent whole weekends literally inside the aviary, talking only about birds,” he said. “That breeding facility, perhaps the biggest in Latin America, was my Disneyland.”

While testing the constitution of a safe breeding stock, Nardelli promoted the idea of crossbreeding with the closely related razor-billed curassow (Pauxi tuberosa) to try to secure a sort of “DNA backup” of the nearly extinct bird. In the process, however, the breeders lost the spreadsheets that identified the genetically pure individuals and the hybrids. A team from São Carlos Federal University (UFSCar), led by Mercival Roberto Francisco, joined in to separate the wheat from the chaff: in 2008, a genetic rescue program for the species was initiated, using minute analysis to differentiate the pure birds from the hybrids.

Francisco, a professor of ex situ (out-of-habitat) conservation and wildlife management, kept in close contact with breeder Roberto Azeredo, of the Society for Wildlife Research (Crax), who 20 years ago inherited part of Nardelli’s breeding stock. Their challenge now is to increase the genetic diversity of purebred Alagoas curassows. For this, Azeredo has suggested that pairs with the greatest DNA difference be made to breed — or rather, to marry, since the bird is normally monogamous; pairs stay together until one individual dies.

This selection process is the central point of the project to reintroduce the Alagoas curassow into the wild, considering the risks of inbreeding in a lineage that descends from just three individuals.

Back to the Habitat

In 1996, already thinking of creating the conditions under which the bird could return to nature, Fernando Pinto founded the Atlantic Forest Preservation Institute (IPMA). The NGO coordinates environmental education actions in the communities and farms of the Zona da Mata, a coastal plain in Brazil’s northeast. It seeks to sensitize sugarcane farmers, whose fields comprise the largest areas of remnant vegetation in the region, to conserve or restore the habitat of the Alagoas curassow. Pinto counts 9,000 hectares (22,240 acres) already converted or in the process of being converted into private natural heritage reserves (RPPNs).

One of these areas is the RPPN Mata do Cedro, in the municipality of Rio Largo, a forest fragment situated within the area of the former Utinga Leão plant (now just Utinga), a sugar and ethanol producer struggling to avoid bankruptcy. The researchers selected the area for the reintroduction of the Alagoas curassow into the wild because of its extension — the ideal habitat should span at least 500 hectares (1,200 acres) of forest — and also because of the absence of hunters.

To ensure it was a safe environment for the bird, the Alagoas Environmental Institute (IMA) and the Alagoas Environmental Police ran daily patrols over the course of two years to monitor the area. “There was no incident of illegal hunting, but we can’t lower our guard. In Brazil, especially in the north and the northeast, there’s a very strong hunting culture,” said Epitácio Correia, the manager of the fauna, flora and conservation units at the IMA.

On Sept. 19, six individual Alagoas curassows were transferred by plane from Contagem, in the state of Minas Gerais, where the Crax breeding center is located, to Alagoas. For the first time in three decades, the species was back in its natural habitat. The birds were initially taken to an acclimatization aviary, built within an Atlantic Forest fragment, in preparation for permanent released on Sept. 25.

Thanks to the satellite tags, the researchers will be able to monitor literally every step of the six newly released birds. If the curassows succeed in the challenge of evading natural enemies such as small wildcats, and prove themselves able to generate offspring, the task force’s plan is to release three more pairs into the wild each year until 2024. Meanwhile, the breeding in captivity continues; there are about 90 Alagoas curassow in aviaries across Brazil.

The sugar plant also provided an area to build an environmental education center, to be inaugurated in January and named after Pedro Nardelli. A fourth pair of curassows will be kept there, in captivity, as a living exhibit for children and adolescents.

Nardelli didn’t live to see his dream come true. He died in August, the month when the reintroduction was initially scheduled. But he could, at least, honor the event at which Alagoas Governor Renan Filho named Pauxi mitu the official bird of the state in 2017.

Watch the video of the release:

This story was first reported by Mongabay’s Brazil team and published here on the Brazil site on Nov. 19, 2019.