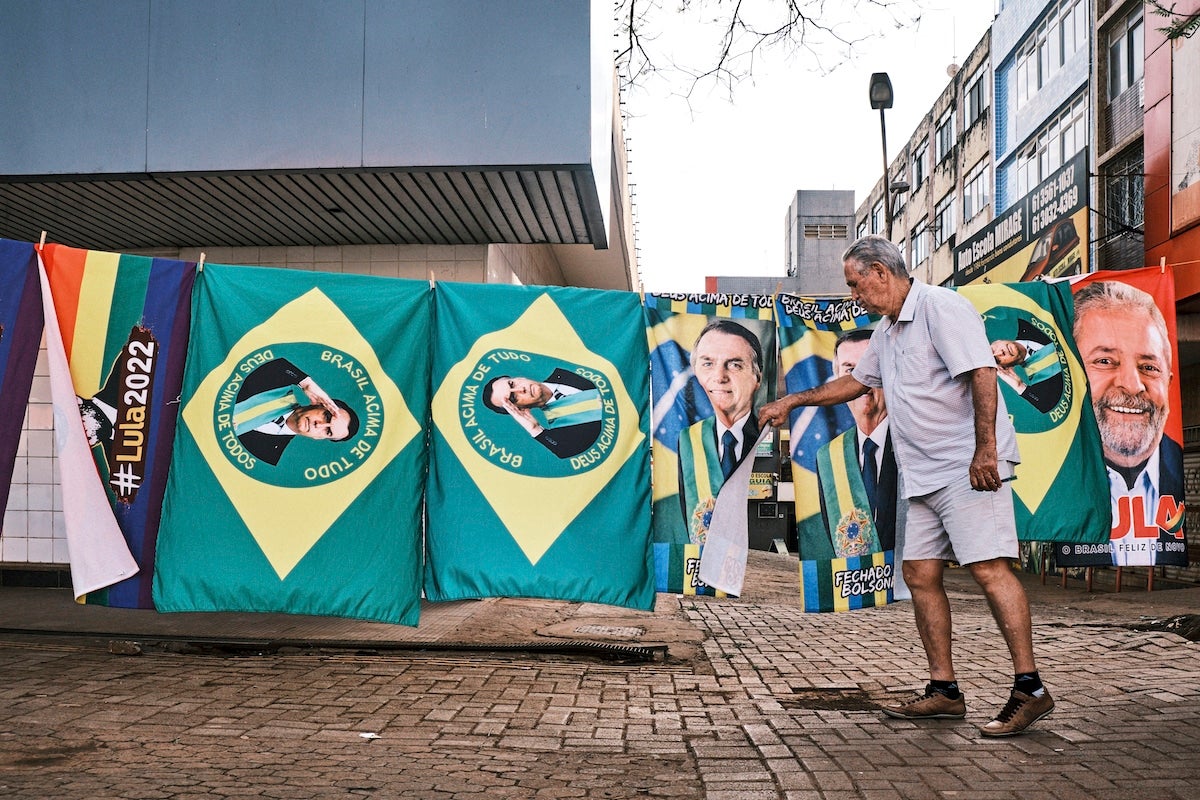 On October 2, Braziilans will go to the polls to choose a new president.

However, what’s at stake in this contest is more than who will lead Brazil for the next four years. What’s at stake, experts say, is the future of the Amazon rainforest.

“I don’t say this lightly as a scientist, but this is the most important election ever in Brazil for the Amazon and its survival,”  senior research associate at the Ecosystems Lab in the University of Oxford Erika Berenguer told New Scientist.

The two front-runners in the election are incumbent right-wing President Jair Bolsonaro and left-wing candidate Luiz Inácio Lula da Silva, who governed the country from 2003 to 2010. Deforestation has reached record heights under Bolsonaro, who has reduced environmental protections, appointed pro-exploitation ministers to conservation posts and rhetorically encouraged deforestation.

“[H]e himself has been incentivizing not-sustainable activities in the Amazon saying that the vocation of the Amazon is actually to mine and to produce commodities like soybeans and beef,” Pulitzer Center’s Rainforest Investigations Network journalist Gustavo Faleiros told NPR.

During his four years in office, deforestation has increased by 74.65 percent, according to New Scientist. In just three years after his election, the country lost 34,018 square kilometers (approximately 13,134 square miles) of forest, an area the size of Belgium, according to Carbon Brief. While Lula and his successor Dilma Rousseff governed between 2004 and 2016, however, deforestation decreased 72 percent, New Scientist reported. Lula has also run on a pro-conservation platform, vowing to reverse Bolsonaro’s deregulations, reappoint scientists to environmental agencies, remove illegal mining from Indigenous territories, create a carbon pricing scheme and form new agencies dedicated to protecting Indigenous rights and meeting the goals of the Paris climate agreement.

Assuming Lula keeps these promises and both men govern in keeping with their past policies, a loss for Bolsonaro and a win for Lula could decrease deforestation in the Amazon by 89 percent over the next 10 years, according to a new analysis conducted for Carbon Brief by scientists at the University of Oxford, the International Institute for Applied System Analysis and the National Institute for Space Research. The analysis assumes that the policies enacted by the winner in 2023 would remain constant through 2030. If Lula wins, it would save a portion of forest around the size of Panama by that date.

The research is based on whether or not Brazil’s leader would enforce the Forest Code, a law passed in 1965 that remains the country’s primary tool for enforcing rainforest protections. It stipulates that farmers must preserve a certain amount of forest on their land and also reforest illegally cleared areas.

Whether or not it is implemented has an impact not just on the Amazon, but on the global climate. If it is not enforced, then Brazil’s greenhouse gas emissions from land use change would continue to contribute to the climate crisis through 2050. If it is, however, the land-use sector would actually become a carbon sink by that date.

As of now, there is hope that Lula can defeat Bolsonaro. The most recent Ipec institute polling has Bolsonaro receiving 35 percent of the vote and Lula 47 percent, according to Euronews. If Lula receives 50 percent of the vote or more next Sunday, he will win the presidency without the need for a run-off election on October 30.

Of course, even if Lula does win, that doesn’t mean it will be easy for him to combat deforestation.

“I think he will face a lot of challenge[s],” Faleiros told NPR. “There is structural problems in the Amazon and the main one is not having another generative of — an economic activity that is not linked to destruction. Mining, cattle ranching and agriculture in general in the Amazon is done with deforestation.”

Lula will have to propose an alternative in the midst of an economic downtown. He will also begin his tenure with an extremely underfunded environmental budget, Carbon Brief noted. But experts thought there was hope he would be able to improve the situation over time.

“I think it’s more likely to expect a drop next year similar to the one observed between 2004 to 2005 (around 30%) and then higher cuts in the deforestation rate as the government reorganises the environmental institutions that were significantly weakened under Bolsonaro`s government and implement additional policies,” Dr. Brenda Brito, an associate researcher at the research institute Imazon, told Carbon Brief.